Wrestling: The Art of Grappling with Life’s Conflicts 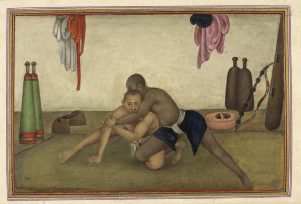 “The art of living is more like wrestling than dancing.” – Marcus Aurelius

We tend to use the term ‘grappling’, at times, to describe a certain struggle to fight, control, or deal with conflicts and challenges in life. Interestingly, this is a technical word originally used in the martial art form of wrestling, which involves grappling holds, throws, takedowns, joint locks and pins. A wrestling match is a physical competition between opponents, who each attempts to gain and maintain a superior position by either pinning down the opponent, or securing submission from him/her to claim victory. There are different styles of wrestling including folk style, freestyle, Greco-Roman, catch, submission, judo, and sambo, among others, and it seems that it was universally practiced through antiquity.

The origins of wrestling goes back thousand years. Babylonian and Egyptian reliefs show wrestlers using holds which even present-day athletes continue to use. In Mesopotamian mythology, the hero Gilgamesh established himself after wrestling Enkidu. In Ancient Greece, wrestling was one of the sporting events in the Olympics, and Homer also mentions it in The Iliad. Additionally Greek mythology celebrates the rise of Zeus after a wrestling match with his father, Cronus. Both Hercules and Theseus were also famed wrestlers. In the Book of Genesis of the Old Testament, the patriarch Jacob is said to have wrestled with God, or an angel, while in the Indian epics Ramayana and Mahabharata wrestling is associated to heroes like Hanuman and Bheem. Arabic literature depicts Muhammad as a skilled wrestler, defeating a sceptic in a wrestling bout. Shuai jiao, a wrestling style originating in China, has a reported history of over 4,000 years.

We can highlight few key principles from the art.

Unlike punching, kicking or the use of weapons which can be employed from a distance, wrestling requires that opponents maintain direct physical contact at all times. Early in a wrestler’s training, one is taught to maintain this engagement, which is more essential than winning or losing. It follows that when a wrestler disengages, out of fear or from being overwhelmed, it is regarded as counter to the spirit of wrestling. Perhaps there lies in this an important lesson for life. When one is unafraid to engage with life, no matter what lies ahead, and despite the fear of the unknowns, the insecurities, or the inertia, we gather an attitude and inner strength to ensure we face life with a spirit of victory. From this foundation, we can approach the challenges and obstacles of life in a better way.

The unique features and energy of each opponent means that no two wrestlers move in the same way. There is constant exchange of energy; sometimes we give (lead) and sometimes we receive (follow), and this is a classic characteristic of life as well. One must always persevere to find the right move and momentum, to overcome each obstacle. If we know our strengths we can bring them forward when needed, and we can learn to absorb life’s lessons with each fall, rather than disengage. This we need to practice every day, in order to develop ourselves and learn the art of grappling in challenging moments, rather than avoiding, escaping or getting stuck with our challenges.

The Chinese Yin-Yang symbol signifies the harmonization of duality. Yang is the masculine, hard and active energy. And Yin is the feminine, soft, gentle and receptive energy. Wrestling is built on the foundation of achieving the right balance between these forces while in movement, with the aim of gaining an upper hand to overcome the opponent. Hence, when the opponent is giving more resistance, a good wrestler will flow until the right junction to reverse the energy, and vice versa. With this, even a lighter wrestler can overcome a heavier opponent. The wisdom of when to resist, and when to flow, is a key to living life with more harmony and happiness. When we encounter conflict, we sometimes resist to the point of becoming rigid, or yield to the point of giving up. It is important to learn to engage with the right movement and the right strategy to overcome each challenge in order to live more freely, despite circumstances.

In wrestling the starting stance is called a ‘Tie-up’. Every feature of a stance reveals a wrestler’s identity. For example, if a wrestler’s legs are spread too wide, it means that he is focussing on stability, at the cost of mobility. Similarly, one’s orientation, priorities, values, and attitude towards oneself, towards others and towards life comprise our stance in the battle of life. Without this clarity, a person is perhaps unprepared for a just fight. Developing our own stance is to form our foundation, our identity, as a human being. This connects with discovering our human qualities and relying on them; for example, to enter a fight with the spirit of altruism, or to enter an unknown situation with the spirit of courage and adventure.

Grappling holds are an essential strategy to leave the opponent little choice but to give up. This skill is mastered by understanding the opponent’s force and using it against him, when the opponent attacks. When faced with a challenge, we can turn it into an opportunity by using the challenge to grow. Although we can’t control what an opponent will do, or what life might throw at us, we can always choose our response to it. That makes all the difference! For example, in times of limitation and adversity, great innovations have been made.

One of the more noble ways to secure victory is by pinning down an opponent’s body on the ground for a few seconds, barring the opponent from the ability to lift a shoulder. This requires brute strength: the wrestler dominates to such an extent that the opponent can’t rise back. To translate this to life, there is a need to use our inner strength. This inner strength stems from values like courage, persistence, determination, etc. In life, these values matter more in the face of challenges, than external strength and material resources. Hence, we need to rely on inner strength which we can harness and express rather than external strength which is not always reliable to overcome a challenge.

To conclude, there are a lot of life-lessons we can extract from the art of wrestling that reveal a different, more empowering, way to look at and engage with our daily challenges. Developing the attitude of an ideal wrestler within us can help; to always engage with life and develop oneself by gathering experience of applying the right tools and strategy, to deal with, and overcome every conflict in life.