There is an exhibition currently running at the British Museum about Ashurbanipal, King of Assyria. It would not be not surprising if you have never heard of his name, as neither the king nor the Assyrian culture is familiar to most of us in the West. Ashurbanipal was the last king of the Assyrian Empire, [...]

Thought: a female head emerging from a block of unhewn matter, her hair blown by the wind, her eyes fixed on the above, concentrated but free, grasping the essence of things.   Not the thought of the anguished intellectual, the complicated reasonings of an empty being who wants to impress; but the grand imaginings of [...] 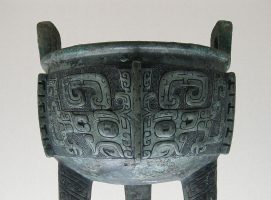 Chinese alchemy has two main branches: ‘external alchemy’ (Waidan) and ‘internal alchemy’ (Naidan). Both words are related to the word dan (elixir), which evolves from a root-meaning of ‘essence’ (the true nature and quality of an entity). In this brief introduction, I am going to concentrate on the tradition of external alchemy or Waidan. The [...]

Grace has become an old fashioned word, graciousness and courtesy have become old world values, almost valueless in today’s environment. The world has gone über brash. Billboards extoll the ‘virtue’ of Attitude, with a capital A: “Wear your Attitude,” screams one, as though attitude were an aspirational achievement! A young generation has grown up with [...]