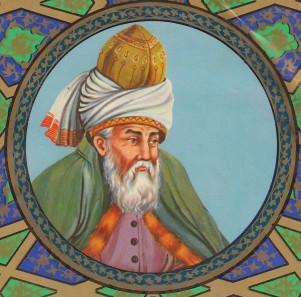 Eight centuries ago a culture of mystical Islam suffused the lands extending from modern day Turkey (Anatolia) to modern day Afghanistan and Iran (Khorasan); it was called Sufi Islam. Etymologically, the word ‘Sufi’ is derived from the Arabic word safa, meaning purity. Mystics of the order created a path towards attaining self-knowledge and god-realisation in their desire to reunite themselves with God. This phenomenon was cradled and nourished by great intellectual, artistic and philosophical icons of the time; foremost among them was Jalaluddin Mohammed Rumi.

Rumi was born in the year 1207 in the Persian city of Vakhsh, located in the region of modern day Afghanistan-Tajikistan. The son of a jurist, scholar and Sufi mystic, he hailed from a lineage of the Hanafi stream of Sufi priests and his home was the haunt of poets and mystics. When the Mongols invaded Central Asia the family traveled westwards through Baghdad and Damascus, and settled in Karaman, Anatolia. In 1228 Rumi once again relocated to Konya, where upon his death in 1273, his remains were enshrined in the Mevlana Mausoleum, which today has become the epicenter of Sufi mysticism. Rumi’s life took a dramatic turn in 1244 when he met the dervish, Shams of Tabriz. Soon Rumi was to transform into a love-infused poet-sage. According to legend, four years later, on a night immersed in debate and spiritual bonhomie, Shams was called out to the back entrance by a mysterious voice. He walked out, never to be seen again. One muses, maybe the illumination that emanates from realization led him towards the ‘whole’, the ‘one’; for he had left behind with Rumi the revelation of the true meaning of the Islamic concept of Tawhid.

Tawhid translates as ‘making or asserting oneness’. To a Sufi, god is, in essence, a unity that finds expression in the plural descriptions, or attributes, of itself. It is the ’oneness’ that suggests that there is no absolute existence outside of divinity. This mystical realization is said to be beyond expression. It can only be experienced through intuition and in beauty. In the Diwan-e Shams-e Tabrizi, Rumi expresses this essence as only a poet can:

Why should I seek? I am the same as

He. His essence speaks through me.

I have been looking for myself!

It is said that through love he discovered his true identity and was born again into the kingdom of a higher consciousness – a human that came into being. Rumi expresses evocatively:

It is love that birthed me, not my mother;

A hundred blessings to that mother.

Rumi subtly recognizes the transformative power of transcendental love as a catalyst that raises a practitioner of religion beyond the bounds of the religious framework into the realm of the religion’s true essence, its philosophy, indeed its mystery. To him, the body is but the lamp that holds the light of the being. Love is the agent that transforms consciousness from identification with the vessel that is our desires, emotions and thoughts, to our true self, the mevla. He writes in his masterpiece Mathnawi-e-Rum:

Someone asked, “What is love?” I answered,

“You will know when you become ‘we.’”

Mevla is an Arabic word that means patron, master or loved one. Shams was mevla to Rumi, who in turn became mevla to his own disciples. Rumi’s poems do not prescribe a solitary path of self fuelled emotion, bereft of active engagement with the world of action. In Shams he had experienced the guiding hand of a guru; the disciple had birthed the path:

Without a guide you become confused

Even on a road you’ve traveled many times.

Don’t turn your head away from the Guide.

After his death, his son Sultan Walad established the Mevlevi Order to perpetuate his father’s unique form of zhikr. Zhikr is an Arabic word denoting remembrance, or invocation, of the divine as a devotional act. Zhikr is ordinarily performed with rosary beads. Rumi, however, performed it in the form of the Sema dance.

The light of zhikr creates the full moon.

And brings those who are lost to the path of Reality.

Rumi gave birth to the Sema dance in a burst of spontaneous inspiration when one day, as he walked the streets of Konya, he heard the rhythmic lilt of the zhikr – la elaha ella’llah…there is no god but God. Suffused with ecstatic joy, Rumi stretched out his arms, one palm turned upwards towards the sky, as if receiving, the other extended downwards towards the ground, as if transmitting. Poised thus, he began to spin in unison with eternity.

As the dervish whirls, he leaves behind the emotions and intellect that emerge from the gateways of the senses and deep-seated instinctive ‘memory’. His consciousness rises, to become harmonious with the beauty and intelligence of the soul. Lost in ecstatic eternity, the disciple becomes the yogi, one who ‘knows union’.

Today when dervishes dance together ceremonially, they rotate on their own axis, while also revolving around an invisible centre; evoking the wonder of the rotating planets that revolve around the Sun. When they dance together, the dervishes exemplify tawhid, for the world of the soul-realized is the world of a collective awareness, where many-become- one; they whirl in synchronic communion as one.

Unless the seeker is absolutely erased,

In truth, he will not come into union.

Until a servant becomes erased completely,

Tawhid is not realized as real.

As for those who accuse him of immersing himself in intoxicated other-worldliness while eulogizing disengagement from the mundane world of responsibilities and obligations, he has the last word:

All that you have read should help close every book.

Any page you have ever turned should have aided in

All talk and words are foreplay. I have other things

in mind for us now. Now close the book!