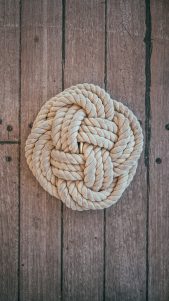 The Legend of the Gordian Knot tells us of an ordinary man named Gordias who rode into the centre of the Phrygian kingdom on his simple ox-driven cart, unaware that a recent prophecy would announce him, as the newest arrival in town, to be declared King. So the capital was renamed Gordium and Gordias went on, anointed by fate, to be a wise and just leader of his people. To commemorate his rule, his son, Midas, tied the ox-cart to a post as a tribute to the gods. The cart was secured in place with a knot so complicated that no one could undo it.

Until, of course, the journey of Alexander the Great in the 4th century BC brought him to the fabled site and the famous riddle. The problem was deemed insoluble; many had tried and many had bloodied their fingers just searching for a thread, a loose end, anything to decipher and unravel the conundrum. Another prophecy had been born, that he who should solve the Gordian Knot would go on to become king of all Asia. Alexander was ambitious and had a keen mind, not only in terms of intellect but of vision. After contemplating the problem a while, he unsheathed his sword and dispensed with the knot in a single, swift stroke. His empire would go on to cover most of the known world.

A part of us may want to yell, “That’s cheating! Surely anyone could have just cut the thing?”. Often our pride makes it difficult to discern the lesson we can learn from such examples, be they historical, mythical, or otherwise. In reality, many of the most complex problems we encounter have a very simple solution which we neglect to consider. The sword of Alexander symbolises intelligence, not the analytical mind that gets lost in the intricacies of the problem but that very discernment and imagination that allows for creative problem-solving.

For our own inner life, we have knots that puzzle us – behaviours, habits, shortcomings, limitations, a variety of knots that bind us, confuse us, hold us back, and often, seem to be tied so tight that nothing could separate and resolve them. The sword, also, has often been a symbol of will: the will to act. We can stare at a problem all day, analyse it until the cows come home and yet sometimes, the simplest action is the most effective. Of course, many knots require a different approach, many patterns of behaviour require progressive and gradual adjustment but we can all reflect on which knots require patient work and which can go the way of Gordias’, with a simple, yet decisive action.