An Opera in Stone: Hampi 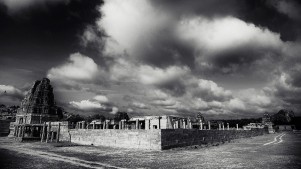 Hampi’s history melds so seamlessly into legend that it is difficult to establish where one ends and the other begins. This tiny hamlet lay nestled within the area known as Kishkinda which, according to the Hindu epic Ramayana, was the realm of the Monkey Gods. Following Ravan’s abduction of Sita, Ram and Lakshman arrived here, and were met by Hanuman and Sugriva. The cave where Sugriva hid the jewels that Sita dropped from Ravan’s flying chariot, the grotto that Ram and Lakshman took shelter in before raiding Lanka, and the birthplace of Hanuman, have over the centuries become sacred places of pilgrimage for devotees.

Between the 13th and 16th Century while the Kingdom of Vijayanagar gradually expanded, Hampi grew into a teeming metropolis, spread over 650 sq.kms, protected by the Tungabhadra River in the north and hills on every other side. Its population of over 500,000 had access to legendary bazaars, brimming with precious stones, textiles, and food, fuelled by merchants from exotic lands. Domingo Paes, a Portuguese traveller who visited Vijayanagar around 1520, wrote that Hampi was ‘as large as Rome and very beautiful to the sight’. And about its market place he claimed ‘this is the best provided city in the world’.

In 1565 the Northern Sultans joined forces to ransack and destroy the empire. Left to obscurity, the city survived, under layers of sand and vegetation until centuries later it was discovered and excavated in 19th century.

Today, Hampi’s magnificent ruins consisting of over 500 monuments include, temple complexes, mini cities, palaces, statues, and shrines, have been declared a World Heritage Site and stand tribute to the architectural artistry and splendor of the Krishna Deva Raya Empire.

Neither spectacular photographs, nor the paeans of friends who have visited, prepare you for the spell-binding moment when you turn the corner, and suddenly, the entire city of Hampi lies below you, its stone ruins rising majestically from behind a river glinting lazily in the early morning sunlight.

We walk down to the riverbank and wait in silent anticipation as the boat fills, and begins to glide across the river. We stare mesmerized, as the ruins loom larger, stately and forlorn.

We reach the opposite bank and climb up the steps into Hampi. A short rickshaw ride takes us straight to the archaeological wonder that is the Sacred Centre, a stunning collection of over 20 temples and shrines laid out across the hills.

I am grateful to be wearing sneakers as we trek up the hill, clamber over boulders and turn to see the spectacular vista before us. An overwhelming sense of serenity falls over me as I stare silently at the architectural poems carved into stone stretching out before me. I marvel at a culture that centuries ago, held spirituality as so vital to life, that a sacred centre lay at the heart of the city, and reverence was so natural and pervasive that meditation shrines & caves were dotted encouragingly everywhere.

Through the numerous stone columns that make up the Hampi Bazaar, and the intriguingly named Street of Courtesans, we trek past water canals, over pebbled pathways, and stop at many temples, statues & monuments where history is palpable.

Of all of Hampi’s beautifully carved temples, the Vithala Temple stands supreme. Dedicated to Vishnu, this is the largest, and most extravagantly ornate. The magnificent stone chariot that has become Hampi’s most recognizable icon stands at the entrance. The Hall of Musical Pillars is acknowledged for the artistic delicacy of the hundreds of vertical, hollow stone pillars that were once used to play music during pageants and festivals. Giant Yalis (the mythical lion-headed horse or Leogryph), elephants, horses, floral motifs & Gods are carved into every inch of stone that make up this architecturally breath taking monument.

Already subdued in the face of splendor we walk towards the Royal Centre and enter the Zenana Enclosure. The Lotus Mahal with its elegant archways, the Water Pavilion, the Queens Baths, all surrounded by lush gardens pay tribute to a lavish royal lifestyle. But the Hazara Ram Temple (The Thousand Ramas) once again takes our breath away. Although the private place of worship for the Royal Family, it is smaller than many of Hampi’s other temples, but its walls and pillars are exquisitely carved with the stories of the Ramayana. We are lucky to arrive with no-one else in sight. On the cool, smooth, stone floor, a gentle breeze blowing through the temple columns, a thousand exalted Ramas surrounding us, we sit quietly meditating in the lyrical silence.

Walking back to the river we climb gingerly into a coracle and float gently downstream. On each side rise the gigantic black boulders typical of Hampi’s landscape. We glide lazily past caves for meditation, shrines to acknowledge divinities, enveloped in tranquility. High above us is a lofty temple built where Hanuman was born. Clouds expand across the sky, ripples on the water expand in ever widening circles, and my heart expands as I look at the horizon, to see the earth and the sky joined together in the distance, as hands join in prayer.

Getting There: Hampi is in Karnataka and the nearest airport is in Hubli, a 3 hour drive away.

Accommodation: There are many hotels, lodges & guest houses to suit every budget, but service staff everywhere, though well meaning, are clueless. Plenty of eateries dot the area; Germans, Israelis and other foreign nationals have opened restaurants, bakeries and snack bars. Alcohol is difficult to find, especially on the Hampi side of the river.

Money: There are no ATMs in Hampi and credit cards are not accepted. Carry cash for all your needs.

Sight Seeing: To properly see Hampi would take many days, but 2 is the very minimum. You can walk, take a bicycle or a rickshaw to see the sights, but a guide is a must. Be careful, everyone will try to overcharge you.

Essentials: Sunscreen, hats, water bottles, walking shoes. A strong bladder is a plus, as toilets in Hampi are few & far between.

Post Script:  Notwithstanding the lack of infrastructure Hampi is a must see; for its stunning architecture, its sublime artistry, its historical authenticity & for its overwhelming Left to obscurity, the city survived, under layers of sand and vegetation until centuries later it was discovered and excavated in 19th century.

Read the original article on http://acropolis.org.in/mumbai/articles/270-an-opera-in-stone-hampi