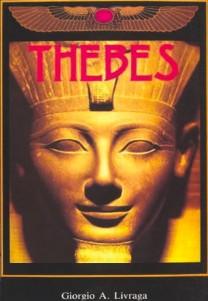 Perhaps no other civilization captures the imagination of intellectuals and dilettantes alike, as does Ancient Egypt. Arguably one of the earliest, longest lasting and most influential civilizations of history, it is recognized for its stupendous artistic, scientific, social, and spiritual achievements. In this slim volume Livraga gives us a penetrating and reflective insight into Ancient Egypt, its highly developed culture, its enigmatic symbols and its sacred philosophy.

Known in antiquity as Kem, or the enigmatic realm, it was a land shrouded in mysticism, and Thebes was its flourishing capital. The city lay proudly astride the Nile, which flowing south to north, formed a distinctly visible vertical axis, while the sun’s arc across its sky from east to west marked an impalpable horizontal one. Along its eastern riverbank, under the rising sun grew a bustling city, culturally wealthy and spiritually rich, the Land of the Living.

And along the Nile’s western bank bathed in the rays of the setting sun, as reminder of the transience of the manifest life, lay a majestic necropolis, The Valley of the Kings, resplendent with its magnificent pyramids, funerary temples and the spectacular stone sculptures of the Colossi of Memnon. It is said that pilgrims journeyed from near and far to hear the seven primordial notes that they once emitted at dawn.

Yet these two cities stood side by side, resting in perfectly balanced equilibrium, complementing each other. One was small and personal, built of ephemeral mud and sand, a reminder of the limits of human existence, and the other lofty and resplendent in solid granite, embodying eternity, the universality of all things, and the certainty of an ‘other world’ far greater than human comprehension. The architects of Thebes seem to have planned the city itself to tangibly remind its people that this life was but a preparation for a more glorious one to come. Even the annual flooding of the Nile that periodically destroyed the mud houses along the eastern riverbank was celebrated, and new homes were built during a festival that commemorated the renewal of life.

Death, therefore was viewed as a natural continuation of the journey of life, and their grief could be translated into what today we might feel at the permanent departure of a loved one who sets out on a long and arduous journey. Their lives were centered around esoteric teachings recognizing the visible and invisible realm of existence, the inner constitution of man and the universe as reflected by their temple architecture and burial rituals, and the persistent effort to ensure that life moved ever forward and upward.

Regretfully much of the knowledge of the mysteries of Egypt is lost to us. Yet what has survived in the form of books, maps, pictures, and symbols painted on the ceremonial sarcophagi, pictorial stories on the walls of the burial chambers and artistic and enigmatic artifacts buried within the tombs, all tell of a rich and exultant culture with a spiritual philosophy emphasizing truth and justice, cultivating within every citizen the capacity to perceive his true Self and elevating the consciousness to recognize the invisible reality of Life.

To the extent that this was the whole purpose of existence in Thebes, the city was not a physical place alone, but rather symbolic of a ‘state of consciousness’, where every element of life, inspired the search for the highest aspect of oneself. Livraga reports that it was often said of this wondrous citadel, “Blessed is he who lives, blessed is he who dies in Thebes.”

This then is the raison d’etre of the book: throughout the history of the world, trail-blazing cultures have evolved that have been able to tangibly evoke a refined sense of morality, ethics and sacredness as part of the everyday lives of its citizens. Society itself fostered the awakening of the invisible core that exists within every one of us, which inexorably pushes us to the limits of our own potential. The citadel of Thebes exists within us all and the question we must grapple with is: how can we cultivate our own intrinsic spirit to swell and bloom from seed to bud to flower, without the nourishing philosophical infrastructure of Ancient Egypt?

Jorge Angel Livraga successfully gives us the tools to help us unravel some part of the conundrum of spiritual wealth that was Ancient Egypt, but leaves it to us to interpret, analyze, and assimilate his illuminating work for ourselves. Perhaps, he hopes that in the process of doing so, we might reactivate the spark of soaring potential that lies dormant within us.

He lays out a synopsis of Egyptian history and makes a convincing argument that the widely accepted scientific and archeological research is simply ill equipped to fully explain the astounding advances that Egypt nurtured, in what is comparatively a remarkably short period of time. His book is an impassioned plea to his readers to be both scientists and philosophers in their quest to understand the mysteries of Egypt, to weigh, consider, reflect and only then “Let each one choose what his culture, his imagination and his intuition dictate.”

Founder of International Organization New Acropolis, Prof. Jorge Angel Livraga Rizzi (1930-1991) was born in Argentina and studied philosophy and history of art at the University of Buenos Aires. His many interests included archaeology and history, and his literary talent was evident from an early age when he won the national poetry prize in Argentina in 1951.Livraga leaves behind a legacy of a youthful and philosophical spirit.