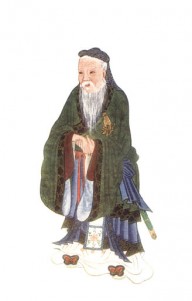 philosopher who has had most influence on the Chinese people is known in the history of thought by the name of K’ung-fu-tzu, or Master K’ung, which the Jesuit missionaries of Peking latinized to Confucius.

According to tradition, K’ung Chung-ni, or K’ung Ch’iu was born in Ch’ü-fu in the State of Lu, on the 21st of the tenth month, 551 B.C. and is said to have lived until 479. His father, Shu-Liang-Ho, had had 9 daughters by his first wife and a crippled son by his second. As none of these was able to perform the sacrifices to the ancestors, at an already advanced age he separated from his wife and asked for the hand of one of the three daughters of the Yan family, the youngest of whom was the mother of K’ung-Tzu. At the age of three he lost his father.

From his earliest childhood, he showed his inclination for the rites and ceremonies: he arranged vessels in the traditional order, even though this was something he had never learned.

His family seems to have been of noble lineage, but poor, with the result that, at the age of seventeen, he was required to take up a subordinate post in the public administration as an inspector of granaries and cattle, under the noble family of Ki. At the same time he carried out teaching duties in the traditional schools, where the children of the nobility learned writing and arithmetic, archery, charioteering, music and ritual. In this way he began a teaching career that was to continue for the rest of his life, until he established his own school.

His fondness for music was a permanent feature of his life, and he particularly cultivated the Shao style. He also loved the folk music of traditional songs, which he collected from the Shih King songbook. It is said that music enabled him to free himself and his disciple Tsi Lu, who accompanied him on many of his travels, from the siege of the people of Kuang.

When Hi Tsi, the head of the noble Mong family, realised that he was close to death, he entrusted Confucius with the education of his son, Mong Yi Tsi and his nephew. Confucius proposed that they should travel together to the city of Lu, the capital of the State of the Duke Chao, to meet Lao Tan, or Lao Tzu, at that time the court archivist, whom he venerated as a master. The meeting between these two sages constitutes one of the most famous scenes of the Chinese philosophical tradition. Confucius’s enigmatic comment has been the object of all kinds of interpretations: “The bird flies, the ram runs along the ground, but no one knows where is the abode of the dragon. I have seen Lao Tzu, he is like the dragon”.

His role as adviser to the weak and indecisive Duke Ting enabled him to get to know the peculiarities of government at first hand and at the same time increased his prestige as a statesman. As a result, he obtained a public position in the State of Lu, as the governor of the province of Shung Tu, and later as Minister of Public Works. In the following year he became Minister of Justice, a position similar to that of a vizier. Such was the efficiency of his methods that within three months he had reorganised the administration. He was fifty years old and by then some of his disciples also held positions of responsibility.

His star began to decline, however, due to the stratagems of the neighbouring state of Ch’i, which conspired to cause a rift between the prince and his minister. As a result, he was obliged to leave the State of Lu. He went first to the State of Wei, then on to Pu, where he had to promise not to return to Wei, a promise which he did not fulfil on the grounds that it had been made “under duress”. This gives us an idea of the extent to which he was persecuted. Later on, King Shao of Shu wanted to grant him a territory, but his dignitaries prevented it, since they knew the efficiency of the disciples of K’ung-Tzu. The young prince Tzu Sho of Wei also asked him to be his adviser. It was his last opportunity to gain access to political life. All these setbacks, which showed him the dark side of politics, finally caused him to retire from public life and devote the last phase of his life to his school and to compiling documents from antiquity. He died at the age of seventy-three.

Among his disciples were: Yen Hui, his favourite, who died before the Master, even though he had told him: “while you are alive, master, I would not dare to die”; Jan Keng, one of the first; Chung Yu, a warrior who loved his sword; Tsi Tiao Kai, who rejected an official post in order to continue studying; Yu Jo, who became the leader of the school on the Master’s death; and almost two centuries later, Meng-Tzu (Mencius), to whom we owe the compilation of the Master’s teachings in “The Five Classics”. He had a second generation of disciples, who were the most brilliant of them all and accompanied him on his travels. Although he lived in a feudal society, the sage made no distinctions about the background of his pupils and admitted both rich and poor alike, as long as they had the desire to learn.

As is the case with many other thinkers of antiquity, no original works written by the Chinese philosopher have come down to us. He used to declare: “I repeat, I do not create anything”, thus indicating that with his contribution he was not claiming to bring anything new, but to recover the spirit of the ancient teachings, the culture (wen) of the kings of the Chou dynasty.

In this respect, some of his most outstanding works are his study and commentaries on the I Ching (Book of Changes), the oracular wisdom text based on the 64 hexagrams mythically attributed to the Emperor Fu Hi, the culminating work of the age-old tradition of Chinese wisdom. Both the “Commentaries on the Decision” and the interpretation of the “Images” suggested by the combinations of broken and unbroken lines are the work of K’ung-Tzu, together with some of his disciples.

Some time after his death, the “Lun-yü” appeared. This was a collection of sayings often referred to as “Mixed Dialogues” or “Analects”, which, in spite of being quoted in a very summary form and out of context, are a key to understanding the Confucian world view, which earned him the title of “master of ten thousand generations”.

K’ung Tzu proposes a return to the principle of Li, giving a new, ethical and moral meaning to this concept of the observance of traditional rites and customs. Beyond a formal set of rules and prescriptions, it is actually about giving visible expression on earth to a cosmic and heavenly order. At the same time it is about human discernment, understanding the link that unites the things of heaven with the things of earth, so that man can express Justice through all his actions. A close connection is therefore made between Morality and Politics, very similar to Plato’s proposals concerning the government of the philosophers. A complementary concept is that of Yi, referring to a correct understanding of social relationships and the fulfilment of the social duties and rights inherent in the position and responsibilities of each person.

Confucian philosophy is also a kind of humanism, which revolves around the concept of “chün-tzu”, the Princely Man, who, regardless of his family origin, is someone who cultivates moral values, knows his duty and acts with a view to the good of the society which he serves. This aristocratic concept has been associated with the term “gentleman”, which Confucius uses not in the sense of someone who belongs to the nobility as a privileged class, but rather as a “noble man” who is prepared to dedicate his life to the practice of goodness and virtue. The chün-tzu is a good, but strong and courageous man, a man who is learned in those disciplines which he needs in order to be of service to society.

Therefore, in order to achieve the ideal of the chün-tzu, study and education are essential, not for the purpose of acquiring theoretical knowledge, but to acquire knowledge of a practical nature, an integrity and consistency, a constant attention in order to correct oneself by learning from one’s mistakes. Education, therefore, when orientated towards learning and practising the arts, can be exceptionally important, not only in terms of acquiring knowledge, but also as means of learning and mastering the ancestral rules.

Confucius emphasizes the tradition of ancestor-worship, applying it to the mandatory duty of serving one’s parents, as a model which is then extended to one’s superiors, so that the State, according to his doctrine, is organised like a great family. In this sense, the development of the individual has an effect on the welfare of society.