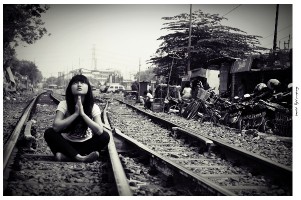 Many recent thinkers have spoken of the troubled times our world is going through and the picture that is emerging resembles more and more the central piece of Hieronymus Bosch’s triptych The Last Judgment. In it we see in vibrant colors the chaotic scenes of anarchy and depravation while society dances and sings to the beat of the drums of limbo (hell). We are in the midst of epochal changes, being threatened by all sort of planetary crises – ecological, demographic, economic, etc. In psychological terms we could say that our culture (Western culture in particular) is facing a mid-life crisis or, more constructively, that it is going through a rite of passage, which if acknowledged should take us from the stage of adolescence to that of maturity.

In line with those thinkers, I also believe that we could be heading towards the edge of an abyss, but I am also aware that there are many individuals out there who want to contribute to a more hopeful future and work towards a transition to a new, saner and wiser civilization. Perhaps their only weakness is that they think that they are few and far between. But is this true?

In his book, The Culture Creatives – How 50 Million People are Changing the World, the sociologist Paul H. Ray argues that when this growing ‘sub-culture’, which he calls the Culture Creatives, will realize its numbers and its potentials, it will have an enormous impact on those critical issues the world is now facing. So, who are the Culture Creatives? They are an emerging group of people, which grew out of the social and consciousness movements of the late 1950s and since then have made a comprehensive shift in their worldview, values, and ways of life.

This sub-culture was identified after thirty years of survey research studies on over 150,000 people, 500 focus groups and many in-depth interviews. Instead of the usual demographic or individual predictors, the surveys used values predictors. Values are better predictors of how people want to live their lives, what are their inner motivations and to what they want to commit their future. In the words of Paul Ray, “the Culture Creatives are people who care deeply about ecology and saving the planet, about relationships, social justice, authenticity, self-actualization and spirituality. They tend to oppose corporate globalization and big business interests and favor women’s issues, consciousness issues, national health care, national education etc. They are both inner-directed and socially concerned, they are activists, volunteers and contributors to good causes”. Another major influence for their growth has been the new information revolution. The Culture Creatives tend to be people who consume a lot of information but unlike the average ‘modern’ Westerner, who is overwhelmed by and unable to assimilate all this data, they know how to discriminate and synthesize information. They also have an eclectic approach to learning, want to look at the world from different angles and value strongly cooperation and cultural dialogue.

Paul Ray claims that in America, Europe and Japan, the Culture Creatives now account for 35% of the population but he adds that “most of them never see the face of their sub-culture in the mainstream media and when they go to work, they have to check their values at the door. So they rationally conclude – it’s just me and a few of my friends.”

In reality there are lots of people who are longing to contribute to a new culture – a Wisdom Culture. A culture which could be enduring because it values long term perspectives and what’s good for everybody’s children and grandchildren. A culture which can learn from all spiritual traditions, which has the willingness to learn from all kinds of people and be concerned about humans and nature alike. Lastly, a wisdom culture which is the result of a concerted effort of co-creation and shared visions.

The bleak image in Hieronymus Bosch’s painting, which I presented at the beginning, can surely be transformed into Raphael’s School of Athens and the reassuring thing remains the fact that both painters, in their contrasting styles, became heralds of a new renaissance. Let us therefore remind ourselves again of what Paul Rays said: “You are not alone. You have lots of company on ways of making a better future”.

If any images used in this article are in violation of a copyright, please get in touch with webmaster@acropolis.org.in as soon as possible. Appropriate action will be taken.
Image References
for a better worldby nanaijo nanaijo.deviantart.com/art/for-a-better-world-102425545 creativecommons.org/licenses/by-nd/3.0/

Read the original article on http://www.newacropolisuk.org/home.php