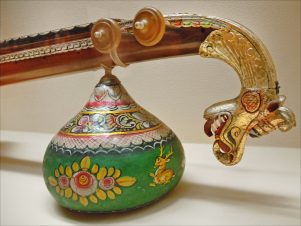 Om. The first sound of creation as per the Hindu tradition. That sound with which all ancient vedic prayers start and end, as if emulating the sacred process of creation through sound. The classical tradition of music in India therefore, has traditionally been treated as a sacred means to interact with the creative principle of Life; it has the potential to play the role of a bridge between the musician and the divine, the higher aspect of life. In that sense, the classical musician embarks upon a philosopher’s journey, seeking that connection with the source and destiny of all Life.

Indian classical music has very ancient origins. It is said that it has evolved over the last 3000 years, beginning with the vedic shlokas, or hymns, sung in specific musical and rhythmic patterns. Together, the rhythm and intonation is said to create impactful sound influencing the person singing, as well as the environment. Over a period of time many a seeker and practitioner have developed and shaped this form of art and expanded its repertoire. There are myths abound that demonstrate this intimate relationship between music, the singer, and the environment. One such tale speaks of a highly celebrated singer from Mughal Emperor Akbar’s court called Tansen, who by singing raga ‘Deepak’ is said to have created fire and by singing ‘Megh Malhar’could invoke rain!

How do we understand these phenomena? Can music really create? How can an artist reach that stage? Indeed, the process of unraveling the mystery of classical music is akin to unraveling the enigma of life. Mastering of the technique and the discipline of a raga was of course the pursuit of the artist, but this was not enough for creating such connection with nature and divinity. For that the purity and higher level of consciousness of the artist was also essential.

Every student of Indian classical music begins this journey with the practice of the first note sa, the shadaj, the very first note of the octave. When I first started learning to sing, for more than six months,  my teacher would simply instruct me to sing the note sa, again, and again, and again. I would hate it. “Why is he making me sing just one note repeatedly?” I would ask myself out of frustration, convinced that my first attempt was already masterful, no different from the last! I was unable to concentrate, and started losing interest. I had no ear for music then and I could not hear the wavering of my voice. Yet, I wanted novelty. I wanted to quickly start learning ragas. But no, I had to continue with that one note. It was supposed to sound piercingly straight and steady, catching the note right in the center; the perfect note – sa. Because it is never accidental or random. Nor is it easy. It’s the outcome of persistent sadhana, daily rigorous practice.  In search of precision, resulting in a deeper, almost meditative, connection that the artist achieves; fully present and concentrated on that one note. What follows is serenity and peace. Yes the journey was worth it. A victorious first battle.

A philosopher, the truth seeker, goes through life like a musician, invoking virtues of love, generosity, compassion, justice from within, through practice in every aspect of life, daily, every moment, till he conquers the tendencies that take him away from that higher aspect of himself.

Ancient schools of Indian classical music were similar to ancient schools of philosophy also in the celebration of the Guru – Shishya tradition. Student had to seek acceptance by the teacher by proving his burning desire to learn and his dedication and devotion to music. Once admitted, first few years went in just learning basic notes and ragas.  Alongside, the student had to serve the teacher and do all the odd jobs, perhaps even living with the master. It was the same basic principle of philosophy; service. Learning to think beyond oneself. The first principle for initiating any sadhana, practice ; slowly and surely killing your ego. More the student became humble, more he was taught, more he practiced and honed what the master taught, more he was exposed to new explorations and paths. His learning process went beyond just music. He observed the way his guru lived. His devotion, his sadhana, for music, never using it for personal gain either materially or for admiration, but always as a bridge to reach divine, putting everything else on periphery.  There are many examples of artists who had immense talent but whose growth was stunted because of the ego or were masterful technicians but not philosophers and hence never touching the soul.

Classical music is about ‘being’, rather than ‘doing’. It’s a long drawn process of gradual transformation. Even for the listener there is no instant gratification in this form. No two-minute dishing out of emotions! Listener here goes on the journey of the raga with the artist, It’s a gradual process of becoming aware, inviting concentration on the subtle nuances and unique explorations that the artist takes you on.

Few basic aspects of Indian classical music: There are of course seven musical notes – Sa – Shadhaj, Re – Rishabh, Ga – Gandhar, Ma – Madhyam, Pa – Pancham, Dha – Dhaivat and Ni – Nishad and then back to Sa of the higher octave. It is said that each of these notes are inspired by the calls of different birds. Sa being that of Peacock and Pa being that of Nightingale!
A raga is the basic melodic pattern, simple or complex, consisting of several notes, in a fixed ascending and descending order. The progression of notes has a definite structure exhibiting a specific balance, harmony and proportion of the notes thus used. Some notes are more prominent in a raga while other notes support. This combination of the notes along with their order and structure has a purpose and intention of creating a certain kind of consciousness, sentiment of the raga. And this sentiment is designed to facilitate the musician’s alignment with specific moments of nature. So, some ragas are sung in the morning, some in the evening and some at night. There are also some ragas that capture the essence of different season like Basant for Spring, Malhar for monsoon. Selection of the right raga to tune into the moment makes the experience magical! It is said that these ragas were designed so as to help people deal with the impact of the daily and seasonal cycles on the body and mind. The shastras on Ayurveda, the ancient treatises on Indian medical science, capture this aspect!
One of the most known vocal styles called ‘khyal’, an urdu word for imagination, clearly illustrates the unique aspect of Indian classical music; rigid as a raga may be in the framework of ascending and descending notes, the artist has complete freedom to explore and imagine the form within its broad framework. There is no fixed composition that the artist has to follow. He can create his own composition with these notes, in the allowed order! A clear example of how form loses its relevance once you capture the essence. The initial need of form, the composition in this case, to express the essence gradually vanishes and the artist becomes free to explore the path in his own unique way. And this is truly a wonderful aspect of this art form. Disciplined yet free!

The artist immerses himself into each raga with a lot of love, respect and discipline. Each ‘khyal’ can last between one to three hours and always begins by introducing the basic melodic structure, followed by faster paced improvisations. There are legends about artists who explored a single raga for the whole day without repeating a single phrase/idea. The artist does not perform to please the audience. His goal is to reach the essence of the raga with his full being, and sharing that higher experience with the audience.

Another significant aspect of Indian classical music is Taal, cyclical rhythmic patterns that serve as the foundation for each composition. Even during the free explorations in styles like ‘khyal’, there is a cycle of say 10,12 or 16 beats and the artist has to come back to the first beat called ‘sum’ again and again. This aspect brings discipline even in free explorations. Each return to the first beat makes his path of exploration clearer to the listener who starts swaying to that cycle, reaching the first beat, ‘sum’ with exhilaration as they grasp and connect to the journey better.

So imagine yourself in an Indian classical music concert of morning ragas. The artist starts raga ‘Bhairavi’, a raga meant to evoke the sentiment of peace, love and devotion. The artist starts the slow ‘khyal’ rendition of Bhairavi. After a while the tabla player, the percussion accompaniment, joins in. You close your eyes and begin to align to the sentiment of the raga. The softer notes tug at your heart. The artist explores the raga, often repeating the same structure, inviting you to grasp the depth of the notes. After about an hour into the rendition of the raga, after the artist has explored the raga in many ways, he moves towards a higher octave, again beginning with sa. This transition feels like a home coming, as if the artist has reached his destination – that end for which the whole journey began. Tears may start rolling down your cheeks. You are in that early morning mood when the first rays of sun are just emerging from the horizon. Life seemingly awakens! As if remembering that it has a purpose to fulfill! And something inside you also awakens! Something inside you has connected with something higher, and you can’t describe it. You have experienced that eternal beauty that exists, and whose expression you were just able to connect with. This has happened to me again and again, many times. And perhaps that’s the reason I am here at New Acropolis, actively searching for my purpose, trying to fulfill it.