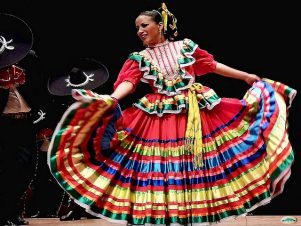 What do you think of when you hear the word “folklore”? Stories, myths, festivals, songs, dance, masks, riddles, crafts, beliefs… All of these and much more are comprised in the term folklore.

The word – literally meaning “the learning of the people” (Folk-Lore) – was coined by William J. Thoms in 1846.  It refers to the shared ideas and values of a particular group, expressed through art, literature and practices that are usually passed on from generation to generation by oral communication.

There is a tendency to underestimate the value of oral traditions as there are no written records and therefore they are not based on facts. Myths are considered as not being facts and therefore not adding any value to our understanding. But perhaps this is due to our modern point of view, which takes facts only from written sources and does not consider anything else as real. On the other hand, one could argue that through the modern technology we use today, we are also living most of the time with images, sounds, effects and motion pictures which are not written sources, but we are making decisions based on these factors and are being influenced by these sources of communication.  Stories, symbols, games, practices, rituals are also similar ways of visual or audio communication. They contain knowledge about a particular group or society and have psychological impacts on the human beings who form part of them.

Writing is certainly an important discovery of humankind and it is unnecessary here to discuss the benefits of writing throughout human history. However, we cannot ignore the fact that the study of folklore can reveal some significant truths about a particular society, its history and the behaviours of individuals. Folklore as an academic study goes back to 19th century where the interest in understanding society’s roots first started.

Folklore looks into the topics such as the earth, sun, moon, natural phenomena, rites throughout the individual’s life, masculine and feminine roles, associations, hierarchies and many more topics that relate to human life. The folklorist’s task is to explore the original sources and their meanings in an unbiased way.

Although traditions may go back thousands of years and there are many factors to consider when attempting to understand a particular custom, I believe it is possible to reach some understanding through a comparative study of traditions. An example would be the study of the concept of “axis mundi”, the centre of the world. The idea that the world is in between heaven and earth and there is a symbolic connection between the sky and the earth itself has been recognised and practised in many societies. Whether it is expressed in nature, like Mount Fuji in Japan, or through architecture in the ziggurats of Babylon, or in the form of a tree which is accompanied by rituals and games as in Maypole customs in England, there are common elements of meaning running through them all.

If you are living in London, you may not come across a fisherman or a yeoman talking about their beliefs and customs about nature; but as we are exposed to cultural diversity, you may come across a Chinese celebration, a Hindu festival or an English custom. I hope this article encourages you to think that there is a possibility of finding more meaning than you first see in these rites. And perhaps you might get closer to knowing about the history of mankind, the creation of the world,  the symbolic meanings of the elements, the duality in nature or cosmic and individual cycles, if you are interested in the hidden meaning behind folklore.