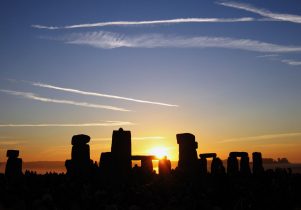 “Sometimes there’s only a hint, a possibility.

If you have visited Stonehenge on the Salisbury plains of England, perhaps you sensed a powerful feeling of mystery, of something hard to define. To the eye they are a series of immense standing stones set in circles. But rather, “Stonehenge is a symbol of Albion, the ancient wisdom of Britain and of different cultural values from a vanished time” writes Archaeoastronomer Robin Heath.[i]

Arguably, the most famous megalithic sites in the world are Stonehenge and Avebury in England, and Carnac in France. But other notable sites include Gobekli Tepe (Turkey), Atlit Yam (Israel), and Pullicondah (India), in addition to examples in Brazil, Australia, Japan and Peru. According to Hugh Newman, in The Bible there are 39 mentions of Gilgal, thought to be the village of Jiljilia in Israel, with a reference to a “circle of standing stones”.[ii]

This article seeks to explore the philosophical significance of Megalithic monuments (Greek root: large stones), which are found across the globe. What purpose could they have served? Are they a beautiful but random collection of large boulders? Or could they represent some deeper wisdom? My investigation was prompted by Megalith: Studies in Stone, a highly informative compendium of eight books edited by philosopher, artist, and geometer John Martineau.  I shall refer to the various findings documented in this work.

How these mammoth structures were built largely remain a mystery, with some individual rocks weighing over 300 tons as is the case with Le Grand Menhir Brise. Some of the beautifully cut blue stones of Stonehenge in England are believed to be from the Presali Hills in Wales a hundred miles away, transported over vast distances, and difficult terrain. Some have suggested that the stones were raised with sarsens and lintels. It was also suggested that the ancients used the earth’s magnetic currents to levitate the stones. The History of the Kings of Britain written in 1150, speaks of the legend of Merlin, the druid, constructing Stonehenge using “gears”, and of giants that Merlin directed to help him with this endeavour.[iii] Howard Crowhurst says that stories persist of an ancient race of giant builders who used levers, ropes, logs and floaters. However, he humbly declares: “The truth is we simply don’t know”.[iv] The classical Greek writer Eratosthenes spoke of an area called Hyperborea and “winged” Hyperborean temples.[v] The Hyperborean are believed to be a race of giants.

Mysteries abound with reference to the deliberate positioning of Megalith sites across the planet. In the 1920’s, British antiquarian Alfred Watkins proposed the idea of Ley Lines, such as the Belinus Line, which cuts across England from north to south, connecting places of historic interest.

Robin Heath proposed the existence of huge Pythagorean triangles connecting various sites, while others, have found massive isosceles triangles connecting ancient sites. In 1969 Guy Underwood wrote The Pattern of the Past, where he suggested that ancient people were aware of subtle Earth currents, or telluric currents, which could be detected using a method called water board dowsing. He is said to have spent thousands of hours dowsing ancient sites all over England and making maps of these currents of energy. Underwood suggested that stone circles, and churches, were built over existing ancient sites where these telluric currents converged. Many dowsers believe that their art may once have been “more widespread and natural, possibly forming part of an ancient science, now almost lost”.[vi] Others speak of menhirs or obelisks as marking springs, underground rivers, as well as telluric currents, almost like an acupuncturist would select points on our foot which are believed to be connected to the vital organs of the human body.

MAPS OF THE CELESTIAL ON EARTH

But perhaps the most fascinating aspect of these ancient structures is their alignment with celestial bodies and events; often they are built in alignment to specific stars, the Sun, the Moon and Venus. Here we need to mention Alexander Thom, a professor of Engineering at Oxford, who spent years surveying standing stones throughout England despite much derision from the archaeological community. According to Gerald Ponting, Thom stood on his yacht one evening and mused, “I saw by looking at the Pole Star that there was a north/south line in this complex… I wondered whether the alignment… had been deliberately built that way…”.[vii] This initial sense of wonder led Thom to conclude that the ancient builders of stone circles used the sophisticated system of measurement he called the Megalithic Yard, throughout Britain and had a detailed knowledge of geometry and astronomy. Ponting explains that this created a furore at the time and Thom was met with much scepticism, as the skills for these types of calculations were thought to have been developed by the Greeks 2000 years later despite opposition, his ideas went on to inspire many and formed a new discipline of archeoastronomy.

What struck me as I researched this article is the beauty and meaning that emerges when two fields of science unite. Modern science seems to have lost this ability to connect life together. Archeoastronomy is a multi-disciplinary approach that studies how civilisations understood the role of the celestial in their cultures. Perhaps we can sense the philosophical significance of these ancient cultures who sought to bring the heavens onto Earth; to mark and celebrate the great celestial cycles that exist in nature.

One example of such an astronomical alignment can be found at the Great Pyramids of Giza, which form a precise three-dimensional earthly map of the three stars in the Belt of Orion. Archaeoastronomer Robin Heath says that carbon dating suggests that Stonehenge was built prior to 3000BC, thereby predating even the Great Pyramid of Giza (Egypt). Stonehenge is said to be a kind of compass of the celestial. On the 21st of June, the Summer Solstice, the sun rises in between the two heel stones (one is missing) and hits the now fallen alter stone. The heel stone perhaps derived its name from the Greek helios or the Welsh haul, both referring to the Sun. In 1963 Peter Newman realised the geometry of the station stones to be aligned closely to the rising and setting of the Sun and Moon. A neat rectangle is formed between the station stones, where one corner marks the midwinter sunrise and the diagonally opposite corner marks the midwinter sunset. The diagonal cutting across the rectangle marks the sunset of the ancient festivals of the Beltane in May and Lammas in August. Its opposite end marks the sunrise of the festival of Samhain in November and Embolic in February. These four festivals mark the mid points between the solstices and equinoxes.[viii]

Alexander Thom observed, “It is remarkable that one thousand years before the earliest mathematicians of classical Greece, people in these islands not only had a practical knowledge of geometry and were capable of setting out elaborate geometrical designs but could also set out ellipses based on the Pythagorean triangles.”[ix]

The alignment of Stonehenge seems to mark the summer solstice. The solstices were believed to be celebrated by ancient civilisations, perhaps to mark the great enigma’s, of Light and Darkness, Life & Death. But a little thought makes us realise that while one part of the Earth is witnessing the summer solstice another is simultaneously observing the winter solstice. Is there a lesson here perhaps? That, in reality, there is only one solstice? Perhaps suggesting that death is a natural part of life? One theory suggests that the ancient Britons built an avenue from Stonehenge, where they performed a ceremony for the dead, leading to the river Avon, where the dead were placed in a boat for their final journey.

Stonehenge’s blue stone horseshoe was built with 19 polished blue stones. Many believe that this is significant. As per 4th century BC Greek astronomer Meton, every 19 years the Sun and Moon return to the same place in the sky, on the same day, within 2 hours of each other. According to Gerald Ponting, in 55BC Greek writer Diodorus wrote: “… there is also on the island… a notable temple which is… spherical in shape… the Moon, as viewed from this island appears but a little distance from the earth… and the gods visit the island every 19 years”.[x] Perhaps he was referring to Stonehenge?

Did these structures then serve as prehistoric temples? Did these ancient peoples, expertly combine not just architecture, astronomy, geometry, engineering and religion but also other sciences and arts into one cohesive framework for their lives? It seems conceivable that these megalithic monuments were a means to tune to the celestial rhythms of nature, a bridge to the celestial, to the stars and the gods. Esoteric studies speak of the purpose of man to unite the heavens with the earth, to bring the great qualities of the celestial, the higher, the sacred to Earth. The scale, durability and sacred alignments are perhaps a reflection of their metaphysical function.

Today we seem to have lost this need to align with the rhythms of nature, of life held so sacred by our ancestors. To tune ourselves to Beauty, Harmony, and Goodness. To recognise that we belong to nature. Perhaps these magnificent structures have endured in order to remind us of this sacred role of humanity? Perhaps we can learn to view modern achievements with a sense of humility and direct our attention to rediscover our rich and sacred heritage to lead us into the future.