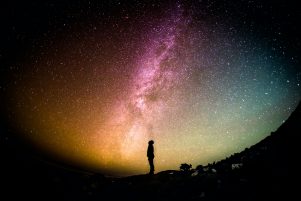 Seventeenth century England was a time of conflict and rapid change, and it is under such conditions that Countess Anne Conway, one of the few female philosophers of her time, developed her clarity of vision and influence. From her home at Ragley Hall and mostly through letters, Anne Conway was in continuous dialogue with the scientific and philosophical developments of her age.

Around this time, René Descartes published his thoughts on ‘dualism’, which are still influential today: his belief that mind and body (or spirit and matter) are two distinct substances. Unlike the majority of her contemporaries, Conway disagreed with Descartes, questioning how substances so fundamentally different and separate from one another could interact and relate with such ease.

In her posthumously published ‘The Principles’ we find Conway’s view – based upon the idea of ‘extension’ – that Spirit and Matter are in fact two distinct modes, or ‘stages’ of the same underlying essence. A good example of this can be found in water, which at its furthest stage of ‘extension’ or density is ice and fixed; in its secondary and intermediate stage of extension is flowing liquid; and at its most subtle and least extended stage is a gas or vapour. Each of these is water, but under different forms, with characteristics, functions and actions particular to each stage.

“If Spirits and Bodies are so inseparably united, that no Body can be without a spirit (…) this is certainly a great argument, that they are of one Nature and Substance, and that a Body is nothing but a fixed and condensed Spirit, and a Spirit nothing but a subtle and volatile Body.” (Conway, The Principles)

Furthermore, when Conway speaks of ‘Body’ and ‘Spirit’, the term ‘Body’ refers broadly to any receptivity or density. In this sense, even thoughts have a body – a density by which they can be retained, recalled and held in the mind.

“The reflection of an image requires a certain opacity or darkness which we call a Body.”

In her metaphysics of extension, Conway classifies three distinct modes or ‘spheres’. The first and highest she calls ‘God’, the second ‘Christ’ and the third, ‘The Creatures’.

God is essentially ‘divine immutability’, ‘the Good’ of Plato ‘the absolute’ which nothing is outside of or beyond, that which is most Spirit.

The second sphere, ‘Christ’, is comparable firstly to space – that within which all things are and have their life. It is also reflective of a certain state of consciousness, of which the historical figure of Christ is a symbol. It is the transcendence of matter and a moral life firmly directed towards the first principle, the Good. The Christ principle is the infinite space through which the potential of movement towards ‘Good’ is possible.

“The second changeable only to Good; So that which in its own Nature is Good, may become yet better”
“[Christ]…for a certain space submits himself to the Laws of Time, that he might elevate the souls of Men above Time and Corruptibility to himself, wherein they receive blessing and grow from one degree of Goodness and Virtue unto another, in infinitum.”

In the third sphere, ‘The Creatures’, the most dense and bodily, life is changeable in two directions: either towards the Good, the higher regions, or away from it, towards corruption. This downwards changeability, according to Conway, can be due either to a deliberate act of Will or to an indifference of Will. Conway also explains that it is not possible to become infinitely more bodily; however, to become more spirit and characterised by ‘the good’ represents a long direction of travel and infinite possibilities.

Conway understands everything which is dense and bodily to be infinitely divisible and changeable, to the extent that it is essentially illusory – matter at the first stage of materiality. Whatever remains is spoken of as the monad.

In some way, the monad – the smallest possible point – shares its nature with the sphere of ‘God’ or the Absolute, in the sense that it, too, is undivided and wholly unchangeable, it is spirit at its furthest point of extension.

Anne Conway was in the Platonic tradition and also acquainted with esoteric works such as the Kabbalah. Whilst she was not publicly known after her death, her work, as explained in ‘The Principles’ went on to influence scientific development, in particular Leibniz, who later developed his ‘monadology’ and was a bridge between Renaissance thought and the modern era.

If life and its laws do not issue from a material basis as Anne Conway suggests, then it is reasonable to suggest that our understanding must also respond and develop on a non-material basis. Consider our material arts and sciences, medicine, technology, music, etc. With this view in mind, across all of these areas, a deep and accurate understanding of life can only ultimately be achieved with ourselves and our actions becoming less changeable and indifferent to what is (in the highest possible sense) Good. Philosophically speaking, the idea of unity between spirt and matter necessarily raises our interactions with all physical life to the sphere of an ever greater moral and spiritual perfection.