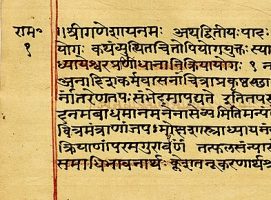 Samkhya is regarded as the oldest philosophical system in Hinduism and its teachings can be found in the Bhagavad Gita. Samkhya has a dualistic view based on two main components which constitute the whole of reality, namely, spirit (Purusha) and matter (Prakriti). Everything that exists is the result of the evolution of prakriti, but the first [...]