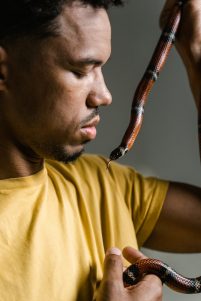 Fear is a sudden interruption of the reasoning process. The first thing that happens to us when we feel fear is that we lose the ability to rationalize any situation whatsoever. But is rationalization necessary when we don’t know what is happening? Generally, when something happens, we form a prejudice, we think a kind of mental fantasy, often without knowing exactly what is happening. This fantasy can have very serious consequences. If we are in a dangerous situation and something happens that we do not know about, it is better not to think.

It is easy to see how in a situation of danger many people do exactly what they shouldn’t do. Why? Because they think without knowing what is happening. If someone drives a car and enters a curve with excessive speed and thinks, the first thing he will do is to brake. That is exactly when he causes his misfortune, because that is where the danger lies: braking sharply in a curve at high speed. Fear can prevent us from doing something mentally. It blocks all mental processes.

Fear, as a feeling, is a sudden stop of all motivational and rationalization processes. When we feel the impact of fear it is as if something falls, we run out of steam, we run out of motivation to do things. That is the second phenomenon that fear produces and also, if we look at it, it is a sudden halt. When things happen, the tendency is to create either traumatic depression or euphoria. There are people who react in common situations with euphoria, and there are others who totally abandon themselves; these are processes related to the motivation of the individual, and in any situation of risk or danger, both euphoria and traumatic depression are negative.

What causes problems in risky situations is recklessness or abandonment. It is curious to observe how, when people are trapped by fear, they end up doing exactly the opposite of what they should do.

These attitudes are a far cry from the so-called “survival instinct”. In these situations, people want to run away and therefore end up doing stupid things. On the contrary, people who take on fear consciously end up doing the right things. The major cause of accidents and deaths is the behaviour we have in the face of fear and not the fear itself.

Fear-perception and fear-sensation are an inhibition-block of all physiological functions. When fear arises, it stops rationalisation, motivation and purely physiological processes. We are left incapable of doing anything for an instant; neither thinking, nor feeling, nor acting.

Fear paralyses, inhibits. We stop before falling off the cliff. Initially, this sudden stop is good because there is a risk at the bottom, and until we know what it is, it is better to stay still.

From this point of view, fear is a force that aims to avoid dangers of any nature, and functions as a signal that interrupts any imprudent action. In concrete and objective terms, fear is just that and has nothing to do with the reactions to it, which, in our case, for cultural reasons, are not natural. Our culture not only did not prepare us to face fear, but also taught us to be afraid of fear, and that is why we react poorly. In a different cultural process, we would face fear in a different way and we would have natural reactions. These natural reactions work in favour of the survival instinct, both of the body and of the mind. There are instantaneous reactions of conditioned reflexes, and we consider them to be natural. But if it is conditioned, it is not fully natural. What is natural in the face of fear is to react independently of our prejudices, to observe the situation carefully in order to know what is happening and not to want to run away from it.

In martial arts, as we train over the years, we end up reacting in a logical or natural way when we are attacked. If someone screams when they are going to attack us, the scream is a sign of attack. Why should I move my head backwards when someone screams at me? Whoever has trained in martial arts, instead of going backwards, first looks at where the scream is coming from, what kind of scream it is, what can be foreseen in relation to that attitude and, once he knows what is happening, he acts. That is natural.

The body’s own natural reflexes do not make us flee from risky situations, but lead us to adapt. We are not used to it. We were educated in a culture that does not teach us to deal with fear, but rather to fear it. Fear can be used as an element of manipulation to subjugate, enslave and dominate people. The fact is that we end up being afraid of fear and, then, in order not to feel it, we pay any price. That is the most complex point in relation to fear. Fear is not bad; what is bad is the reaction we have to it, because we have not been educated in a correct way to face it.

Fear is a natural force. It is not my fear or your fear, it is just fear. It exists independently of people; there is something in us, and also outside of us that is called fear, and that has a function in nature, like the Sun, the Moon, the water, the earth or any element. Fear is part of nature and its function is to protect, as incredible as it may seem.