An Esoteric Interpretation of the Arabian Nights 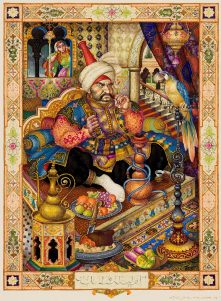 When the breeze of a joyful dawn blew free

In the silken sail of infancy,

The tide of time flow’d back with me,

The forward-flowing tide of time;

And many a sheeny summer-morn,

Adown the Tigris I was borne,

By Bagdat’s shrines of fretted gold,

True Mussulman was I and sworn,

For it was in the golden prime

Recollections of the Arabian Nights

In describing his childhood impressions of the Arabian Nights, the poet Tennyson reflects what most people experience when they come into contact with the famous Tales of a Thousand and One Nights. The tales seduce their readers with the exotic charm of the Islamic Golden Age of the 8th century when most of them were written down for posterity. We read about sultans, viziers, poor fishermen and rich merchants. The stories are full of beautiful and intelligent ladies ready to sacrifice their lives to save others, as well as obsessed and promiscuous women who would do anything to satisfy their appetites. Nevertheless, beneath the surface of human passions, aspirations, victories and failures, lies a hidden and deeper meaning to these tales, bringing back memories from a distant past when different races mixed together, when white and black magicians clashed in the eternal battle between good and evil, when the elemental forces could work with you or against you. Surely, as W.Q. Judge puts it, “with so much smoke there must have been some fire.”[1]

So, what are the Arabian Nights? They are a collection of tales told by the beautiful Scheherazade, who is married to the bitter and cruel Sultan Schahriar. The Sultan, having been deceived by his previous wife, would marry a new wife every evening, and then have her strangled in the morning. The life of Scheherazade, the new bride, depended on her ability to produce stories night after night, leaving them carefully unfinished at appropriate points so as to be asked to complete them later. This is only a reflection of the oral tradition of story-telling in the Far East, India, Persia and Arabia, which later, through Egypt, reached Greece, and inspired the great works of ancient poets such as Homer. On closer inspection, there appears to be a striking similarity of facts, figures and numbers. It is enough to compare the adventures of Odysseus and Sinbad to see the unmistakable link between the two mythical characters.

Could we see in the tales about giants, genies, magic seals and flying carpets references to the mythical Atlantis? According to traditions from around the world (the Indian Mahabharata, Plato’s Timaeus and Critias, to name but two) there was a time in the far distant history of humanity when mankind combined advanced science and technology with magic – although magic is nothing more than science and technology applied to the invisible planes of nature. Arabia and Persia were both famed throughout the world for their Magi, men knowledgeable in science and magic.

As for the many references to genii, these are the Jinn of Arabian tradition and the Elementals of Western Esotericism – nature spirits who sometimes collaborate with human beings, sometimes work against them. The story of Aladdin and his lamp (incorporated later into the Arabian Nights) bears testimony to this. According to the interpretation of the theosophist W.Q. Judge, elementals play an important role in the Karma of humankind. Since they are unconscious and automatic, they simply reflect human behaviour. If they are hostile to humans, it is because people act in this way themselves. The only way to harmonise this relationship is to “cultivate brotherly feelings and charity towards the whole creation.” Continuing with his interpretation of this tale, Judge claims that Allah’s Din (Aladdin) means God’s religion and the lamp represents the enlightened soul, which follows true wisdom, and as such attains wonderful powers to control nature or matter.[2]

In conclusion, a new layer of meaning can be glimpsed in many of the tales of the Arabian Nights. The lamp can be ours if we only prove worthy of it.