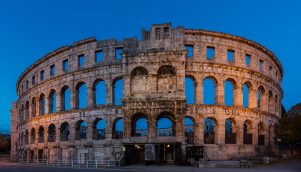 The period known as the Roman Kingdom with its seven kings represents the time when the seeds of an emerging civilisation were firmly planted in the “Italian” soil. There is a growing academic consensus that the seven kings of Rome were all real historical figures, including Rome’s founder Romulus. This doesn’t mean that all the mythological and legendary stories surrounding their lives have to be taken literally. They are only pointers and symbols which are meant to give the historian some clues as to the essential character of the civilisation in question.

With regard to the foundation of Rome, from the earliest records that we have we can deduce the following points: Rome was born within a rural-agricultural context, it was guided by a strong martial spirit, it was formed by a mixture of different peoples (Latins, Sabines and Etruscans) and its socio-political vision and strength were rooted in the sacred.

At the very beginning of the story of Rome, we find its first king, Romulus, ruling not alone but jointly with the Sabine king Titus Tatius. This tradition of joint leadership (where two elected consuls served together), which was devised to allow for a better balance of power, lasted nearly 700 years. Romulus and Titus Tatius soon established the king’s council, the basis of what would later become the Roman senate. It was formed by the most noble men, the Roman fathers (later called senators and also patricians – from paters). Romulus was also responsible for the creation of private property and the basic “laws” relating to landed property. The first structuring of society into different social groups or classes (similar to a caste system) is also attributed to him. Romulus’s reign ended with his deification and ascent to heaven. He becomes a hero, the founder and protector of Rome, also identified as the God Quirinus.

The second king, Numa Pompilius, was instrumental in building the spiritual and ‘sacred heart’ of Rome. His main achievements consisted in the creation of various religious colleges: 1) the Flamines (priestly figures) each of whom was devoted exclusively to the worshipping of one deity. Of the 15 Flamines, the most important ‘served’ Jupiter, Mars, and Quirinus, respectively. 2) the Vestal Virgins who tended the state cult of Vesta and kept the sacred fire of Rome alive. 3) a college of Augurs, devoted to the observation and interpretation of signs of the will of the Gods (called Auspicies), such as thunder, lighting and the flight of birds. 4) The Salii or leaping priests of Mars who decided on the opening and closing of a military campaign and magically ‘protected’ Rome’s army. 5) The Fetiales, a group of priestly officials concerned with various aspects of international law and relations, such as treaties and declarations of war. 6) The College of Pontiffs, made up of the highest-ranking priests who organised and supervised all the other religious colleges. Its head was the Pontifex Maximus, the most important position in the ancient Roman religion.

After Numa Pompilius, a new king was unanimously elected, Tullus Hostilius. Loved above all by the popular classes, he was a warrior and belligerent king and his surname, which means hostile, was the proof of this. He embarked on many bloody wars against Rome’s neighbouring cities, including the ancient city of Alba Longa (founded by Ascanius, the legendary son of Aeneas, the mythical ancestor of Rome).

The fourth king, Ancus Marcius, tried to readdress the balance between war and peace. This was nevertheless a time of continuous and intense warfare between cities. Marcius was a great military strategist and intelligent king. With him commerce and economy prospered. He started the construction of salt marshes for the production of salt, a priceless and essential source of wealth (this is where the word salary comes from!). His greatest achievement was the establishment of the first Roman colony, the coastal city of Ostia, which became Rome’s harbour and gave direct access to the sea.

The fifth Roman king, Tarquinius Priscus, was an Etruscan. He had the great ability of forming many political alliances between foreign and hostile peoples. For instance, until then, the Etruscans had been Rome’s greatest enemies, but thanks to Tarquinius they could be kept at bay. This was also the time when many Etruscan cultural and symbolic elements were incorporated into the Roman world. Other great achievements of this king included the foundation of religious festivals like the Roman games (Ludi Romani) and the construction of one of the world’s earliest sewage systems (the Cloaca Maxima).

It is quite clear that by the end of Tarquinius Priscus’s reign, Rome had expanded so much that some very radical social and political reforms were needed.

This is when Servius Tullius came onto the political scene. Despite being the son of a slave, who came from a very humble background, he became one of the greatest Roman political reformers. Through a major population census the Roman army’s centuria system was born. And thanks to his reforms, Rome’s ordinary citizens became a distinct force within Roman politics, who were now entitled to participate in governmental decisions.

The reign of the last king, Tarquinius Superbus, was characterised by a kind of dictatorship, which eventually marked the end of the monarchy and the beginning of the Roman Republic. Superbus’s arrogant leadership ended in a popular revolt which sent his family into exile. But Rome had to win a series of bloody battles and withstand a siege in order to completely get rid of this king, who by then had become its worst enemy. This, in short, is the fascinating story of Rome’s first steps, which patiently but resolutely marked its cultural supremacy over the ancient world.