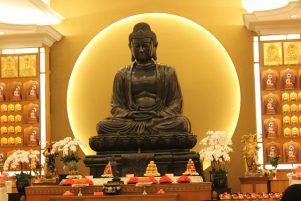 Twenty-five centuries ago, King Suddhodana ruled a land near the Himalaya Mountains.

One day during a midsummer festival, his wife Queen Maya retired to her quarters to rest, and she fell asleep and dreamed a vivid dream. Four angels carried her high into white mountain peaks and clothed her in flowers. A magnificent white bull elephant bearing a white lotus in its trunk approached Maya and walked around her three times. Then the elephant struck her on the right side with its trunk and vanished into her.

When the time for the birth grew near, Queen Maya wished to travel from Kapilavatthu, the King’s capital, to her childhood home, Devadaha, to give birth. With the King’s blessings she left Kapilavatthu on a palanquin carried by a thousand courtiers.

On the way to Devadaha, the procession passed Lumbini Grove, which was full of blossoming trees. Entranced, the Queen asked her courtiers to stop, and she left the palanquin and entered the grove. As she reached up to touch the blossoms, her son was born.

Then the Queen and her son were showered with perfumed blossoms, and two streams of sparkling water poured from the sky to bathe them. And the infant stood, and took seven steps, and proclaimed “I alone am the World-Honored One!”

Then Queen Maya and her son returned to Kapilavatthu. The Queen died seven days later, and the infant prince was nursed and raised by the Queen’s sister Pajapati, also married to King Suddhodana.