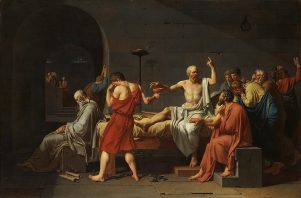 Art has the ability to elevate us. In equal measure it can provoke, disturb, and challenge us. Art can do many things, but perhaps at its best it can connect us not only to each other, but also to something higher, a more perfect ideal beyond the realm of the material. There are many lenses with which we can view and attempt to understand a work of art. We can look for a story through the prism of history and myths. We can examine technique, style and aesthetic; and we can certainly ask, does this piece of art invite us to think differently?

I would argue that a masterpiece is more often than not an amalgamation of all of those things, story, technique, style, aesthetic, and a symbol that travels from the artist to the viewer, traversing time and culture. ‘The Death of Socrates’ by the French painter Jacques-Louis David is certainly one such masterpiece.

The painting takes us back to 399 BC, to the execution of Socrates. Accused of corrupting the youth of Athens and failing to honour the city’s gods, Socrates was sentenced to death by poisonous hemlock. Prior to that, Socrates spent much of his time dissuading fellow Athenians from pursuing material ambitions and urging them to focus their attention on moral perfection. His life, and subsequently his death, became an exemplar for challenging what we think we know and striving to know ourselves and our soul more truthfully. It was during his trial that he famously professed, “the unexamined life is not worth living”.

David has taken some liberties with history, for at the time of the execution, Socrates would have been 70 years old and unlikely to have been quite as fit and muscular as he appears in this representation. The artist has also added in a few characters that were not present at the execution. Plato, one of his most loyal students, for example, is seated head down at the far left of the painting and Socrates’ wife, who weeps in the background by which she is engulfed.

The Death of Socrates is a defining piece in the neoclassical movement, which emerged in the late 1700s. Unlike the theatrical Rococo style that was prevalent at the time, David opted for a more subdued style, relying heavily on straight lines, smooth surfaces and a less varied palette of vivid colours. The use of light in the foreground against a dark background and the careful balance of the executioner in red with Socrates in white, enhance the stark crispness and simplicity of the piece.

David’s technique, aesthetic and style alone are not what make ‘The Death of Socrates’ a work of genius, for it would be shallow not to attempt to uncover the vital meaning and symbolism that are inherent within this work of art. The piece has become timeless in its ability to communicate a commitment to an ideal. In David’s painting, Socrates is epitomized by his ability to be guided by ideals rather than passions. He is painted as a man of angular geometry, situated upright in comparison to his companions who are curved and arched, symbolising weaknesses and passions of the lower self. Both his physique and the gesture of his hand elevate him above the scene and setting that he inhabits, thus pulled upwards by his higher principles.

The anguish on the face of his fellow companions is contrasted with the calm and self-composed look on Socrates’ face, conveying the strength of his mind and conviction. Indeed, the final moments of Socrates’ life, as depicted by David, connect us with the universal, philosophical tenet that living in accordance with a higher ideal can help us face life and death more bravely.