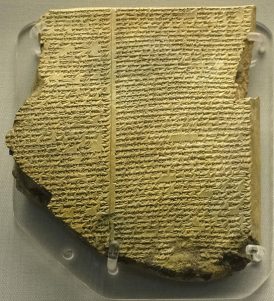 There is an exhibition currently running at the British Museum about Ashurbanipal, King of Assyria. It would not be not surprising if you have never heard of his name, as neither the king nor the Assyrian culture is familiar to most of us in the West.

Ashurbanipal was the last king of the Assyrian Empire, which was the largest of its age (7th century BCE). He is known for his victories in expanding the Empire, being ruthless with his enemies, but also for his scholarship and for building a great library. The discovery of his library is considered to be one of the most important archaeological finds of the 19th century.

Whenever we study any event or figure in history, it is important to understand the culture, belief systems and values of the society at the time, in order to be able to see the subject we are studying in its full context and so give it its true value. This is especially necessary when the subject is alien to our own culture.

One of the outstanding relics depicted in the exhibition is the king fighting with lions. For a modern audience, this might be seen as violence and cruelty. However, an ancient Assyrian would have a different view on this. Lions, which are a popular symbol in Assyrian culture, represent the earthly, raw, wild part of Nature. An Assyrian King would be expected to prove himself able to control this raw, wild part of Nature and protect his people against all that was wild and dangerous in the world. Lion hunting was performed as a ritual rather than for pleasure or enjoyment. In most cases, the king himself could be vulnerable to injury or even death.

Apart from his title as a lion-hunter and a warrior, he was also considered to be a great scholar. In fact, what we know about the Assyrians today comes from the cuneiform tablets found in his library.

One of the lasting legacies of Assyria and other Mesopotamian cultures was their ability in administration and law. Examples of contracts, mortgages and temple accounts were found in Ashurbanipal’s library. He also learnt how to read and write on the tablets and was soon able to read any cuneiform tablet, no matter how old it was, as well as being able to read in other languages.

Among the texts found in his library were some sacred writings such as the Enuma Elish (Creation Myth) and the Myth of Gilgamesh (a great epic about the human journey and the meaning of life) .

His library also contained books on the deeds of kings, omens, instructions for rituals, prayers, magic and medicine. His father, Esarhaddon, employed astrologers who wrote reports on the appearance of the sun, moon and constellations, which were kept in Ashurbanipal’s library. Thanks to these tablets, we have access to some of the earliest records on astronomy and astrology.

Ashurbanipal’s interest in knowledge continued throughout his reign. While he was expanding the empire, recognising the importance of preserving the past, he sent envoys to every point of all the lands under his control and had them retrieve or copy the books of that city or town, bringing everything back to Nineveh for the royal library.

The tablets were discovered in the ruins of the city of Nineveh (now northern Iraq), once capital of the Assyrian empire. As happened to most of the ancient libraries, it was at one point consumed by fire. However, unlike with paper or parchment scrolls, the clay tablets were in most cases baked harder, making them better persevered documents.

It is widely believed that Alexander the Great visited the Royal Library of Ashurbanipal and that this gave him an idea that would later become the Great Library of Alexandria.

Considering the variety of texts contained in the library and the importance he gave to knowledge, we can say with certainty that he wasn’t only a powerful and ruthless king, but also a great scholar and promoter of knowledge.