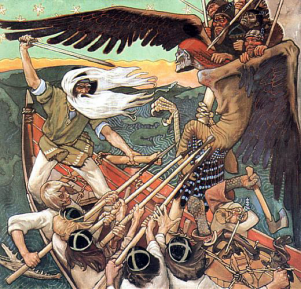 A truly beautiful Finnish epic, in which words weave ancient stories of the world, its cycles of life and its heroes. Sung and passed on by word of mouth for centuries, it was recorded only in the 19th century by Elias Lönnrot.

The word “Kalevala” means ‘land of heroes’, the abode of Kaleva, a mythical ancestor.

The Kalevala’s picturesque verses are full of adventures, mostly of the eternal sage, shaman and singer Väinämöinen, and of eternal blacksmith Ilmarinen, who hammered down the lid of the heavens.

It was Väinämöinen who was the first man on earth, born out of his own effort from the water-mother, the maiden of the air, after praying to the Sun, the Moon, and the Great Bear. Born already wise, he created the land and brought nature to life by sowing the seeds of everything.

Väinämöinen journeyed through the world and beyond, and undertook various magical quests and impossible tasks. When building a boat of magic by his power of song, he realised he could not finish the job as there were three words missing. He therefore embarked on a quest to find the words of power, but those he found were useless. So, the wonder-worker bravely went to Tuonela, the abode of the dead. Only with great magical skill was he, the old man of calm waters, able to escape unharmed. Upon his return he brought moral teachings to young people to enable them to win joy eternal and not to go to the dark Tuonela, full of suffering and pain.

In spite of all his trials, Väinämöinen was unable to find the missing words in the land of the dead. So, he decided to seek out an ancient sorcerer, Antero Vipunen. However, the magical bard had died ages ago and his giant body had become part of the world.

To help his friend and brother Väinämöinen with such an impossible task, the skilful smith Ilmarinen forged a special suit of armour.

The old and wise Väinämöinen woke Antero from his eternal sleep and entered his body through the mouth. At first, the bard was not bothered by such an intrusion. But Väinämöinen transformed himself into a smith and started a forge inside the stomach of Antero. After a battle of words and persistent forging, Vipunen opened his word-chest and shared the ancient wisdom. Thus, the missing words of power were discovered. Väinämöinen learned the secrets of nature and finished making his magic boat.

Other songs of the Kalevala tell the story of the Sampo, a mysterious object that brings wealth and prosperity. The mighty Ilmarinen made the Sampo at Väinämöinen’s request for the land of the far north, which was ruled by Louhi, a woman of great magical power. Later, the sons of Kalevala realised the importance of the Sampo and asked Louhi to share it. But she refused, so the heroes decided to steal it. Their plan almost succeeded, but Louhi caught up with them in the sea and started a fierce battle. As a result, the Sampo was broken into pieces. Väinämöinen found those pieces and brought them back to Kalevala. It turned out that the pieces preserved enough potency to provide goodness for all the land.

There were many more adventures, many more songs and enchantments… until a child was born from a virgin called Marjatta, who became a new king of the land of Kaleva. Väinämöinen had to leave the mortal realms with a promise to return when he would be needed again. He departed in the evening “to the higher-landed regions, to the lower verge of heaven”, and left for us here his magical instruments and his songs and wisdom-sayings to keep the memory of the heroic times, because out of the memory of the past comes the future.