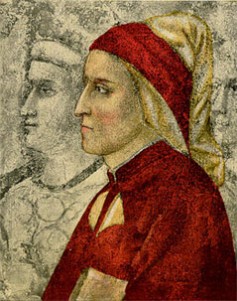 Dante Alighieri is very well known in the world of art and literature, but not many people are aware of the hermetic and occult teachings he purposely disseminated throughout his works.

Despite current historical misconceptions, Dante’s time, the so-called “Middle Ages”, was a time of great spiritual vitality, in spite of its contradictions (such as the cruelties of the Inquisition). Thanks to the Crusades, there were many intellectual and spiritual exchanges taking place between East and West. Many of the teachings of classical antiquity together with the Christian mysteries were being circulated through various ‘underground’ movements. We can for instance see how a single spiritual thread runs through the Knights Templar, the mysterious builders of the cathedrals, the authors of the Grail Cycle and the medieval Alchemists.

Dante was himself affiliated to secret organizations like La Fede Santa (the Sacred Faith) a tertiary order of the Templars, and a mysterious group of ‘poets’ known in literature as the Fideli D’Amore (the faithful to Love). There are many traces of a hermetic language employed by these ‘poets’ to communicate the existence of initiatic doctrines as well as that of a ‘brotherhood’ serving these doctrines. One of the main themes promoted through the lyrics of the authors of the “dolce stil’nuovo” (a sweet new poetic style) was the mysteries of Love as a vehicle for ascending to the divine. The “beloved” woman appearing in their literary works under various feminine names (Rosa, Beatrice, Silvia, Savage, etc.) was always the symbol of Transcendent Knowledge or Wisdom and what Dante himself had undertaken was this inner journey towards Sophia.

Dante’s Initiate life and his relationship with Wisdom and its followers probably started at the time when he wrote the Vita Nuova (the New Life) and culminated during the time he composed the Divine Comedy. In the Inferno section (IX, 61) Dante explicitly says “O you possessed of sturdy intellects, observe the teaching which is hidden here beneath the veil of verses so obscure” and then he goes on to describe his spiritual journey starting with the descent into the centre of the Earth (alchemical Black phase) and the climbing of the mountain of Purgatory (White phase) to reach the stars and the vision of God (his higher self). As he enters Paradise (Red phase) he says: “I was within the heaven that receives more of His light; and I saw things that he who from that height descends, forgets or cannot tell”. I leave you with these beautiful verses, which at once conceal and reveal the majesty of Dante’s hermetic message.

If any images used in this article are in violation of a copyright, please get in touch with webmaster@acropolis.org.in as soon as possible. Appropriate action will be taken.
Image References
By www.museumsinflorence.com/musei/Dante_house.html | Wikimedia Commons | CC BY PD