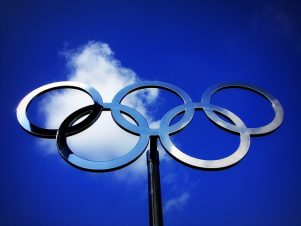 The year is 1936. The Olympic Games in Munich are underway and Adolf Hitler, Chancellor of Germany, publicly comments, “The sportive, knightly battle awakens the best human characteristics. It doesn’t separate, but unites, the combatants in understanding and respect. It also helps to connect the countries in the spirit of peace. That’s why the Olympic flame should never die.” (1) Behind this facade of unity, however, was the hope that the superiority of the ‘pure’ Aryan blood race would be definitively showcased.

In this context, German Lutz Long, set an Olympic record on his way to qualifying for the Long Jump finals. African American Jesse Owens had fouled on his first two attempts and was staring at a disqualification on the third. Before he made his stride, Long walked up to him and suggested he pre-mark his take-off spot a couple of inches before the foul line thus ensuring that he would miss the foul line and at least qualify. Owens took his advice and cleared the jump to qualify for the finals; he went on to win the gold, eventually setting a new world record. The lap of honour after the jump in the finals by Owens and Long, became a beacon of triumph of the Olympic spirit over racial differences. Speaking to journalists over the years, Owens described, “It took a lot of courage for him to befriend me in front of Hitler.” (2)

The Olympics, have produced some memorable moments of great sportsmanship and fraternity illustrating the victory of the human spirit. As is summarised by the Olympic motto, “Citius, Altius, Fortius”, which translates to “Faster, Higher, Stronger”, every athlete aspires for the best of the human potential. When a sportsman wins, the victory is not just owing to a particular skill that has been practiced for many years; the victory also celebrates the hardships and the breakthroughs of barriers that enabled the athlete to reach the podium. It is victory of the mind over the body when a marathon runner crosses the finish line. The victory of a boxer lies in his determination, as he rises every time he is knocked down. It is a victory of team spirit, when a crew team paddles in unison towards victory. And it is a victory of harmony when synchronised swimmers execute a routine with grace and poise. Sport is thus a medium through which to manifest the inner strength of character; virtues that collectively as human beings we aspire for, but perhaps find it difficult to express in our day-to-day lives.

Plato suggests that beyond the prize and glory, the true celebration of spirit is the motivation towards excellence that emerges from will (internal) rather than competition (external). (3) Many tournaments traditionally end with the ceremonial handshake signifying the basic respect for opponents as competitors, fellow human beings, each sharing in the aspiration for perfection. And respectful admiration of this mutual aspiration is honoured as more valuable than personal victory.

Cross country skier Anton Gafarov was nearing the end of the Men’s sprint at the semi-final in the Sochi Winter Olympics 2014 when he suffered a bad fall that damaged his ski blade. Not one to give up, even though he had already failed to qualify, he was keen to finish the race in front of his home team. He continued, only for his ski to snap. Waiting in the wings, the Canadian team coach Justin Wadsworth raced onto the track with a spare and personally replaced Gafarov’s broken ski saying, “I wanted him to have dignity as he crossed the finish line!” (4) In our times, when man is fighting man in the most insane ways, sports provide us an arena to come together and put differences aside.

One defining aspect of the spirit of sport is the importance attributed to ethics. At the 1932 Games in Los Angeles, 21-year old British fencer Judy Guinness was on her way to a gold medal, when she walked up to the judges and informed them that they had twice failed to deduct her score; her opponent Austrian Ellen Preis had actually touched her twice. Guinness therefore relinquished the win and accepted the silver instead.

Such exemplary ethics can be witnessed in cricket as well. Several batsmen are known to have simply walked off the pitch, even if the umpire missed identifying a minor nick to ball on the way for a caught behind. In doing so, ethical sportsmen admirably honour truth above personal glory. Although not always clearly evident, this requires a great deal of courage. And athletes therefore are role models who showcase ethics, fair play, and honesty.

As the sports industry has matured, and with big money now involved in most sports around the world, however, we see a sharp fall of ethics, with cases of substance abuse, ‘doping’, and match fixing scandals surfacing.  The motivation in sport has sadly fallen to personal victory, driven by monetary rewards and superficial fame making what once used to be a ceremonial celebration of the human spirit into just another materially driven business.

Greece, considered the mother of classical philosophy, attached great significance to the relationship between sports and philosophy. Plato exhorted that a good education must develop virtue in man; gymnastics and sports are essential components of education which, beyond physical fitness, develop the value of fortitude. It is also evident that through sports, one develops self-confidence and morality.

Besides sportsmanship, sport ingrains values that go beyond the development of physical excellence: discipline, perseverance, hard work and acceptance.

Discipline is fostered through a regime of training, controlled diet, and perseverance. Not every match can be won always. Not every opponent can be defeated always. And therefore, perseverance; accepting failure as a part of life. Rather than discouragement, they can become opportunities that motivate constant improvement;   training harder, practicing longer, repeated battling of inner challenges. Sportspersons, for example, often imply that the only real way to attain victory is to overcome fear of defeat. As Olympic gymnast Nadia Comaneci once said “I don’t run away from a challenge because I am afraid. Instead, I run toward it because the only way to escape fear is to trample it beneath your feet,” she said. (5) The external expression of excellence on the field is therefore a reflection of inner strength of character.

For this reason, many organisations today rely on sports based activities when conducting workshops to develop leadership and teamwork. Such exercises highlight the value of working together to extract the power of the collective. In order to do so, each team is led by a captain who possesses special skills and is therefore best suited to lead. And yet, in spite of stellar individual feats, only a collective team effort enables a win or loss. As part of this pyramidalic hierarchy, the captain gives the team motivation and direction, but each team member is an essential and integral participant. Each individual within the team has a specific role to play, each strives for excellence in this role, which affects the entire team’s performance. In cricket for instance, we have seen many defeats in spite of stellar batting by individuals such as Sachin Tendulkar; as a collective, the team could not outplay the opposition.

Today in the age of multi-million dollar sponsorships, politics in sport, sport for money and for glory, perhaps its true value remains in its ability to foster harmony and the expression of the human spirit. Long after the music of the national anthems end after the presentation ceremony, what lingers is the sentiment of the best of the human potential; always Faster, Higher, and Stronger.