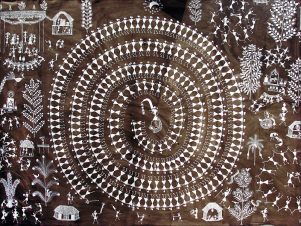 “They still look upon life as a gift to be celebrated; and this ancient Earth as one to be praised, worshipped and also celebrated. They are the one to whom the earth is not something to be used, not a possession or an object for exploitation but a living entity, an object of reverence, and the relationship is one of sacred trust and loving intimacy. For, they believe as much in celebrating one’s life in this world as in remembering, adoring and celebrating the world in one’s life. The sacred soil of ancestors into which one is born is thus a part of one’s fundamental psychic experience of life and is a part of its spiritual dimension. The earth, the land, the village enter into and are secure in racial memory and it is only an ethical imperative to worship the Earth goddess, the Mother Earth.” – Sitakant Mahapatra

In this article, I seek not to publish a scholastic investigation of Warli Art. Instead, as a philosopher studying symbolism, I humbly share my observations of a few elements from its unique tradition in which the artists seem to have been preoccupied, not with mythology, but with the strong drive to align to Nature’s order, by celebrating life and revering Mother Earth, through a unique sense of aesthetics.

Today, people throughout the world are perturbed by the degradation of the environment and the disastrous consequences of the loss of resources in the hands of an ever growing population. In such times, traditional ethics, which contained nature conservation, can be looked upon as a source of inspiration and guidance for the future. By this I mean not ‘fixing’ nature, but reviving our natural identity as an integral part of nature. Therefore, perhaps we might begin by fixing our own perspective; our attitude towards life at large. There is a profound variety of cultural practices that cultivate such an ecologically sound relationship with nature, which is embedded deep in the Indian tradition, as seen in Warli Art.

Although native to the northern Sahyadri region, there is not much clarity as to the origin of this rudimentary art form. Some date its development to as early as the 10th Century AD, while some historians claim that the Warli tradition stretches back to 2500 to 3000 BCE. It was made famous in our times by Mr. Jivya Soma Mashe, who is known as the modern father of Warli painting.

One feature of Warli art, unique among the traditional art forms in India, is the absence of bright colors. It employs pigments, usually red ochre for the background, made from a mixture of branches, earth and red brick. The painting of the subject was usually done with just a white pigment made from a mixture of rice paste, water, and a binding gum. It is said that a chewed bamboo stick was used as a paintbrush.

The subject matter primarily comprised scenes from simple daily village life, in all its movement. It doesn’t appear chaotic, but usually has a specific direction, capturing simplicity, harmony, and unity, as if imitating nature. The scenes seem to demonstrate the deep understanding that Man is a humble part of Nature, playing his role, contributing to its harmony. The Warli people seem to animate everything in life; stone, plants, animals, the weather, mountains, rivers – everything is alive, bearing spiritual essence. And the whole of life is observed to be coordinated in such a way, that it always perpetuates and celebrates collective wellbeing.

Interestingly, the ritual painting was usually composed around a central square, a chauk, home of the mother goddess Palaghata, the sacred fount of life. In this way, Mother Earth was placed at the very centre, surrounded by the day-to-day activities in all its hustle and bustle. To me, Mother Earth symbolizes fertility, beauty, justice and altruism. These eternal principles, when placed in the centre, harmonize and unite all aspects of human activity. This central priority given to the sacred perhaps captures the un-anthropocentric understanding of Warli life.

Another expression of unity commonly depicted in Warli art is the sun, illustrated geometrically as a circle. Note that by definition, all the points on the circumference of a circle are united because they emerge from a single source, one dimensionless centre. Similarly, without the central sun, life would not exist on planet Earth, which is just one planet in our solar system. It is unsurprising therefore that the sun is considered a spiritual symbol in many traditions. If this principle of unity is indeed a law of nature, what then stops us from expressing it in our lives?

Maybe what is needed is the individual effort to join hands, and focus on what unites us rather than what separates; to move consciously towards the eternal principles we see in nature. This is symbolically illustrated in the depiction of the ceremonial tarpa dance; women and men dancing, hand in hand, forming the iconic spiral, led by the one in the centre. Each one is dancing individually, but all are also dancing together, as if to a single tune of life, in one direction, which is inwards. If we look at nature, every phenomenon seems to occur in such a cyclical spiral manner, from the seasons to our very breath.

If the principle of cycles is indeed a law of nature, wouldn’t the next natural question be: Why? What is the purpose of such a spiral-cyclic movement? The spiral is a geometric symbol, which may hold some meaning to understand the direction of life. It demonstrates that the movement of life is not just repetitive. Instead, with each iteration of the cycle, experience and consciousness can deepen, demonstrated graphically by the inward movement, towards the centre. Probably the opportunity lies in our routine lives, when we repeat actions on a daily basis. Can we use our mundane repetitive acts as opportunities to learn and improve, to do the same actions more meaningfully, to extract a more enriching experience, and take a humble step closer to perfection each time?

Another geometric symbol used is the triangle. Human figures are represented as a pair of triangles; one facing upwards, another facing downwards. Such is the potential of a human being, one triangle pointing towards the celestial, its base on earth, while another triangle pointing towards the earth, with its base in the sky. Both triangles meet. Perhaps this suggests the meaning and purpose of the complex entity we call a human being, which according to tradition has always been regarded as a union of a celestial and a terrestrial part. This seems to depict the potential of man, to become a bridge between the two realms; he must educate and tame his animalistic terrestrial base, to move upwards. And at the same time, he must grasp the higher archetypes or noble ideas, giving them expression in worldly daily life, thereby bringing meaning to a mundane existence.

For me, the simple language of Warli art therefore, is a world of meaning. Fundamental ecological principles, such as the interrelationship and interdependence of all life, are conceptualized and reflected in this beautiful tribal art form. It reminds me that we are all a part of a whole, and not the centre of life. We have an important role to play. Let us take responsibility over our actions and take our humble place. Many of us look forward to a blooming, growing India in all aspects; economy, technology, medicine, the arts. However, how big can a tree really grow if its root starts decaying? It is imperative for us to cherish and nurture the philosophical treasure that has nurtured our roots. And perhaps we can use the wisdom of our ancestors, to enrich our present and dream of a brighter future.