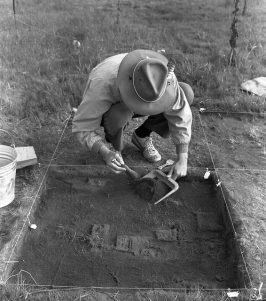 Archaeology, a relatively modern science, took off during the industrial revolution. Not just because the scientific method allowed for better research tools, but also because the religious dogmas that had imposed their own version of the past were slowly fading. And even though the most enlightened scientific figures of antiquity knew that the earth was round, old religious biases often interfered with a more reasonable vision of our cosmology.

It is important to realise that more than 99% of human history is pre-historic, meaning that there are no written accounts. You don’t even have to go that far back to find a non-recorded or lost part of history. England’s first written historical records, for example, date from the 7th century AD (St Bede). So how can we learn more about this hazy period? New scientific methods in different fields are helping us creating a timeline.

Making mistakes is part of learning. It is what the scientific method is about. For something as complex as ancient history and pre-history it is very difficult to draw definitive conclusions. Trying to fit a specific timeline established a few decades or centuries ago might be our first mistake. This could be compared to a detective looking for evidence to convict someone he believes to be guilty and ignoring, whether consciously or not, the evidence that points in a completely different direction.

Collecting and compiling new and old data can be tricky, especially when you have conflicting data (e.g. egyptology). With the help of new scientific methods such as optics and nuclear physics, we have been able to see through rocks, earth and jungles to find traces of ancient human civilizations.

Laser scanning technology (LiDAR or Light Detection And Ranging) has helped us see through very thick tropical jungle in central America. It has allowed us to discover over 60,000 Maya structures . Laser technology can also help to analyse some of our very ancient structures such as Stonehenge in more detail.

Seeing through stone and bedrocks using infrared technologies and muography has allowed us to look at the great pyramid of Khufu in a different way , revealing secret chambers and corridors. These non-intrusive methods are designed to analyse with care one of the world’s most ancient and massive structures. Other pyramids have been subjected to the same analysis in an attempt to understand their purpose and use better.

However, you don’t always have to use fancy scientific tools to make new discoveries about our past. More often than not, just opening our eyes or digging a little can lead to paradigm-shifting discoveries. One of these is Gobekli Tepe in Turkey. This site was believed to be too recent to be worth investigating, but thanks to the perseverance of the archaeologist Klaus Schmidt, in 1994 one of the greatest and most ancient megalithic sites in the world was unearthed. As a result, Gobekli Tepe has made us reconsider our current timeline regarding the beginning of civilization.

To find the most ancient sites in human pre-history you might have to go to Indonesia. Some scientists claimed in 2012 that the pyramid of Gunung Padang might be the oldest structure ever discovered. The pyramid-shaped monument, made of many layers of basalt stones and earth, could be as old as 28,000 years .

All this does not mean that we have to reject our current views of the past entirely, but it can help us to broaden our horizons and keep an open mind when it comes to something as complex as human history. Philosophy of history, which forms part of our curriculum at New Acropolis, shows us that, as well as objective facts, there are many subjective elements in history, which we need to be aware of if we are to penetrate the deeper meaning of history in the different cultures around the globe.