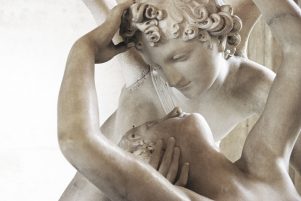 So much has been written about love that another article would seems to be almost unnecessary. But then again, do we really know what love is? Where does it come from, is it external or internal, do we need to awaken it or do we earn it? It has such tremendous powers that we can all feel it and as such it will always inspire us. It can lead to madness or to the highest state of bliss. The ancient Greek philosopher Plato wrote a whole dialogue concerning love or Eros. The dialogue is called The Symposium and it goes deeply into the mystery of love and into the Mysteries themselves.

There is another story that takes us into the depths of love, called the myth of Cupid and Psyche, which is part of the book Metamorphoses, also known as The Golden Ass. The story was written in the 2nd century AD by a Platonist philosopher, Lucius Apuleius.

Once upon a time, so the story goes, there was a king with three daughters. Psyche was the youngest and unparalleled in her beauty. People compared her even to Venus, the goddess of beauty herself. They abandoned temples and shrines dedicated to Venus and praised Psyche instead. This didn’t please Venus and as a punishment she sent her mischievous boy Cupid, in ancient Greece known as Eros, to shoot Psyche with his poisonous arrow at the exact moment when she was looking at the most miserable and vilest of men, so that she would fall in love with him. But when Cupid found Psyche he was so taken by her beauty that, in his confusion, he wounded himself with his arrow.

As Psyche was still single her worried father consulted the Oracles of Delphi. They declared that she had to marry a monster. The family was overwhelmed by grief, but Psyche accepted her fate and went to the prescribed place of her wedding. That was the edge of a cliff, from where the wind took her into the valley below. She appeared in front of the most beautiful palace full of riches and invisible servants fulfilling every wish. At night a voice came to her explaining that he is her husband who loves her dearly, but that she should not try to see him under any circumstances, otherwise he would be lost for her forever. Those were the conditions in which they lived together; joined at night, but separated at the break of dawn.

After some time Psyche started to miss her family and asked her husband to order the wind to bring her two sisters for a visit. When the sisters arrived and saw Psyche’s rich palace they got very jealous and devised a cunning plan to destroy Psyche’s marriage. They told her that her husband was a poisonous snake waiting for her baby to grow in her belly and then devour them both. Naïve Psyche took her sisters’ ill advice to cut the throat of her husband. During one night she took the lamp and the knife, prepared to kill her monstrous husband, but as soon as she saw him lying in the bed, she recognized that her husband was Cupid, the most handsome being she had ever seen. At that moment she mistakenly wounded herself with his arrow. Cupid woke up and, disappointed at her breaking their agreement, flew away. Psyche left the palace in search of her husband. Finally she met Venus who gave her some impossible tasks. She completed them all with the help of Nature. Her final trial was to go to the underworld and bring back a box with a portion of the beauty of Persephone, queen of the underworld. On the way out, at the very end she couldn’t resist opening the box and, as soon she opened it, cold eternal sleep enveloped her body and she fell to the ground. But Cupid found her and with his kiss brought her back to life. He then went to Olympus to see his father Zeus and arrange for his marriage. Psyche was brought to heaven and made equal to the gods. They lived happily ever after and from their union a child called Joy was born.

Learning from the story it seems that what awakens love is beauty. Beauty is the spark that ignites the power of love, the spark of the transformative process. This is also why the arts in the classical world had such an important place within society; they help us to transcend the mundane though their connection with beauty. Not everything is clear to us at first; we don’t recognize that invisible visiting voice at night, but slowly, like Psyche, we can awaken our consciousness, or our soul, which is what Psyche really represents. Philosophically Cupid (love) has a mission within the soul. Without Cupid the soul cannot grow and cannot be resurrected. It is not a coincidence that the word philosophy carries love in its name. That is why it is philosophy in its essence that carries that transformative power.