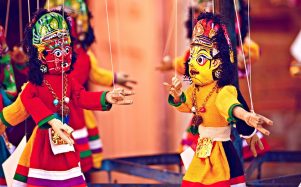 The question of free will is one of the oldest and most enduring questions facing humanity. The ancient Greeks considered it in their tragedies, such as Oedipus Rex, where it seemed as though the hero’s fate was predetermined in spite of any actions he might take to prevent or alter it. The Greeks and their cultural successors, the Romans, had an image of three Fates, who wove and spun the destinies of men, and cut the thread of their lives at a pre-ordained moment.

In the East, the doctrines of Dharma, Karma and Reincarnation helped to explain the question more clearly. Dharma is the law by which every being has a destiny arising from its own nature. The oak seed will become an oak tree and the human being will develop into its fullest expression, with time… a lot of time (hence the doctrine of reincarnation). Karma is the law of action and reaction whereby every action we take, on any plane (including invisible planes such as the mind or emotions), will have a reaction, depending on whether our action is in harmony with the natural laws of life, or not. In this way, we build up a ‘karma’ – ‘good’ or ‘bad’ – which will bring us the bitter or sweet fruits of our past actions. The purpose of this process is (a) to help us learn about the laws of life, (b) to provide justice and (c) to ensure the safety of the whole system, since unlimited freedom of action without consequences would lead to a breakdown of the universal order.

This approach implicitly contains both the notion of a guiding intelligence and an element of free will in the actors on the stage of the theatre of life. The Eastern philosophers would say that Oedipus arrived at his tragedy through the accumulation of past karma, or perhaps the karma of his family or culture, of which he was a part. But what lies within the scope of his free will would be how he reacted to the tragedy of his fate: whether with dignity and nobility, or with resentment, anger, bitterness and hatred.

The Stoic philosophers of ancient Rome, such as Epictetus and Marcus Aurelius, took a very similar approach. They held that many of life’s outer circumstances lie beyond our control, for example the family or country into which we are born, our health, reputation, wealth and so on. Some of these factors can be modified by our own action to some extent, but others can’t – for example if you were born a serf on a feudal estate in the Middle Ages, your chances of escaping that life would be minimal. Or if you were unjustly imprisoned in a police state, there is little you could do about it. So, our free will is limited in these outer aspects, but, according to the Stoics, it is unlimited in terms of our inner life and our own actions. No one can force us to think in a certain way, or even to act in a certain way; we always have the freedom to say ‘yes’ or ‘no’ (or even ‘maybe’) to the choices life offers us (accepting the consequences of our decisions), and therein lies our free will.

For some thinkers, however, our free will is not only limited, but non-existent. In medieval Christian and Islamic philosophy there was a big discussion about whether or not man has free will, and there were even some daring thinkers who questioned whether God, the source of all things, can be said to have free will.

In the Renaissance the idea of free will definitely had the upper hand. A feeling of self-confidence and optimism pervaded the human spirit and it was believed that man was master of his own destiny and could achieve anything – all of which is reflected in the wonderful art and culture of that period.

A few centuries later, a more pessimistic philosophy took hold. David Hume (1711-1776) believed that human beings, despite their reasoning faculty, are completely subject to their passions and not as free as they would like to think. We find the same idea in Freud’s view of the human being – dominated by instinctive drives which can be controlled by social restrictions but are always on the point of erupting to the surface if they are not kept in check. This view seemed to have been proved correct by the carnage of the First World War and reconfirmed by the horrors of the Second. What cruelties was supposedly civilised man not capable of, once the superficial veneer of civilisation had been removed?

So what is the reality of our free will? Today there are scientific experiments that claim to prove that free will does not exist. But we have to bear in mind that science has made many claims in the past which were later proved to be incorrect. So I think we are on safer ground if we look at the matter from a philosophical point of view. Is it possible to answer the question definitively? The scientific argument could be seen as just a new manifestation of the old position of determinism. The fact is that both positions (determinism and free will) are partly valid, as the teaching of dharma and karma indicates. There is the determinism of karma, or chance (whichever term we prefer), but there is also the free will to decide and to act within the present circumstances.

The Neoplatonic philosopher Plotinus (204-270 AD) said that the reason why we are preoccupied by the question of free will is that “we are beset by compulsions, violent assaults of passion crushing the soul, feeling ourselves mastered by these experiences, going where they lead, being like slaves to them [similar to Hume’s view]… So we doubt whether we are anything at all and have power over anything.” “Aye, there’s the rub,” as Hamlet said. Are we anything at all? Are we real, or are we, as in The Matrix, products of some fiendish computer simulation engineered by a heartless intelligence? Plotinus says that, in order to answer this question, we must go back to the very source of all things, which he says must logically be some single first principle, a causeless cause. Did this principle, which the philosophers of India called simply ‘That’, neither being nor non-being, have free will, or was the entire universe generated automatically, either by chance, or by the first principle being ‘forced’ by necessity to produce the whole universe because it could not help but act in accordance with its own nature?

In the first case, Plotinus shows that ‘chance’ cannot precede the first principle, but must necessarily proceed from it, like everything else. And in the second case, a first principle cannot be subject to necessity, because all laws, including necessity, must also proceed from it and it would be absurd to think that something which is the supreme good to which everything aspires could be subject to anything at all. In a short article such as this I cannot attempt to describe Plotinus’ arguments in any detail, but for those who are interested I refer you to the chapter in his magnum opus The Enneads entitled ‘On Free Will and the One’.

In Plotinus’ philosophy the world is produced by emanation: from the One is produced, “by sheer wealth”, a second principle or being, called ‘Intellectual-Principle’, and this in turn produces ‘Soul’. Soul shares the characteristics of the Intellectual-Principle and ultimately of the First Principle. Therefore we, as participants in Soul, must also share in real being, in other words, in answer to Plotinus’ earlier question, we are real, or at least there is a part of us which is real.

If this is the case, then we do have free will, because by virtue of what is real in us we can act independently of all circumstances. In practical terms, this means that if we wake up in the morning in a bad mood, due to a bad dream, bad digestion, a row with our partner or a business disaster, we can exercise our will, the highest manifestation of our being, and decide not to succumb to that bad mood; and in general not to succumb to tiredness or to anything that would cause us to lose our dignity as human beings.

The belief in free will does not negate the existence of chance or determinism in certain areas of life; the two factors can coexist if we know how to act with wisdom.