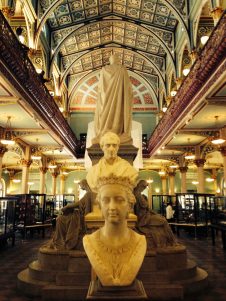 In five years Tasneem Zakaria Mehta revitalized a decayed and dying museum, transforming it into a vital and accessible cultural focal point for Mumbai. As vice-chairman of the Indian National Trust for Art and Cultural Heritage (INTACH) and Honorary Director of the Dr. Bhau Daji Lad (BDL) Museum, Tasneem spearheaded the exhaustive research and the painstakingly detailed restoration of the museum’s architecture, its interiors and its exhibits. In recognition of her work, she earned the 2005 Unesco Heritage Asia Pacific award of Excellence for Conservation. At her home surrounded by art, sculptures and books that are her life-blood, Tasneem spoke to The Acropolitan about the importance of Art and the need to preserve our cultural heritage.

The Acropolitan (TA): You are so passionate about disseminating art history. What is it that this knowledge or appreciation can do for our youth?

Tasneem: I think art opens up a window within. It sensitizes us to other people, to individual differences. It allows us to enlarge our minds so that we are able to see other perspectives.

For example, contemporary art can deal with difficult issues like politics and gender. It is a means of conversation about these things without becoming violent and aggressive, to develop tolerance; to agree to disagree. Art can be appreciated as a catalyst to conversation.

TA: Why is it so essential to preserve the past?

Tasneem: The past is incredibly important. In order to know who we are today, we must understand where we are coming from. Without this knowledge we cannot think of the way forward. A nation with an opaque past will find it hard to define itself. The heritage of a people, its national legacy, defines the national identity; it is an integral part of who we are as a nation.

Museums are platforms where you investigate different cultures: how they represented themselves, the importance that they gave to the different aspects of life. To me a museum is a time machine that takes you backwards and forwards in time. It is a memory bank for our descendants and a record of what we want remembered and sometimes of what we must not forget. It takes careful research and scrupulous honesty to present the facts.

Tasneem: A well written history book could do an adequate job, but I think what museums do is make history much more accessible. Museums are interactive and visual and so have an immediacy that a textual medium does not. You have to engage with text, decode it and understand it. You may be hampered by your facility with the language, or how educated you are. And there’s no comparison between reading about something and looking at the craftsmanship and beauty of the object itself. Each object opens up a whole world. It tells a story… who made it, for what purpose and to where did it travel before it got here? That for me is a very interesting investigation. It’s like a treasure hunt. You find a clue here, you decode something else there and then you connect the dots and put the picture together, using your knowledge and experience to bring something valuable to others.

TA: What role does INTACH play in nation building?

Tasneem Mehta: The Indian National Trust for Art & Culture Heritage was started by Mrs. Gandhi and Pupul Jayakar because we needed an organization that would preserve and protect our substantial national heritage which was constantly under threat.

Studying Indian heritage is especially interesting because it comprises so many different kinds of heritage. It comprises the intangible aspects such as oral history, customs, rituals and practices. But cooking is also part of the legacy, as is Ayurveda, and the way one might build a hut. Material heritage combines all craft traditions. Cultural heritage includes all the performance traditions, literature encompasses language traditions and environment heritage concerns itself with how the geography and environment impact cultural context.

And of course there is our considerable Architectural Heritage. Many institutions such as the army and the navy had many beautiful heritage buildings such as railways stations, post offices, court houses and entire cantonment towns that were slowly being destroyed because  laws and regulations were not strict enough at the time. Accordingly, maharajas, collectors, commissioners, cabinet secretaries, along with artists and art aficionados were all part of the advisory board to the government.

At a national level we protect our natural resources, document and keep account of thousands of unprotected historic buildings, revive dying arts and crafts, run a conservation lab, a heritage academy, many education and community programs, and we maintain libraries and archives. We have aggressively begun to fight to protect precincts such as Mumbai’s mill spaces, to repurpose them for public use. We must protect the industrial legacy of our city. In the process of our work we found hundreds of huge, old, hand-made solid cast-iron machines, so stunningly beautiful that they were works of art. And they were being given away to scrap!

TA: Is there a conundrum here…machines as art?

Tasneem: Not at all. Art is all encompassing. When I see old typewriters, old printing machines, all the technology of a time when it was all handmade, I recognize an amazing quality. Yes they may be machines but they were conceptualized by people, made by people, wrought by people…they are truly works of art that we must preserve.

TA: My overwhelming reaction when I come out of the BDL museum is awe, a sense of reverence for what a people achieved and how they thought.

Tasneem: You are right. It is like being in a temple. In fact museums as institutions in the very beginning were conceived of as secular temples. Many national museum are even modeled after classical Greek temples. There is a deliberate intention of creating a sense of identity and affiliation with the nation. They were a way for the state to communicate with its people, and to showcase its power.

TA: Every culture throws up its own unique art. There are cultures like Tibet, which are austere and abstemious. Rome is an example of the complete opposite with opulent temples and massive monuments that reflected in the grandiloquence of Renaissance Art. What would you say about Indian Art?

Tasneem: Indian art, like all art when it first developed, was about expressing the majesty of God and interpreting the universe. Different cultures portrayed this differently. Even though India had a rich tradition of art long before the British Raj, Indian artists were not considered refined enough to commission. Indian miniature art, for example, was considered infantile because it was flat and two-dimensional. But it had its own logic, completely different from the grand Renaissance style for example. It was intimate, about intricate, barely visible detail. There were painterly codes, but because they weren’t understood, they were rejected as childish.

So for me personally, bringing the Indian artist back to centre stage was a political statement in a kind of riposte to that historical position.

TA: Is there a philosophical context that under pins your work.

Tasneem: Everything…even a stone, anything that is part of nature, is an expression of God; even the aberrations. We are not here to judge, and even though we may not understand them, we know that aberrations exist in nature, in the plant as well as animal kingdoms, and we should accept it all as part of divine expression. It is unfortunate that this very evolved, very inclusive, understanding has eroded today.

So for me, a museum is a forum to showcase inclusiveness and engender the understanding of human differences on a democratic stage. At the BLD you see poor and rich alike mingling, and there are very few places in Mumbai where this still happens; not in restaurants, hotels, malls, multiplexes, nowhere else but in a place like ours.

TA: How would you explain to a generation that has been extorted to live in the present moment, the relevance of our ancient cultural legacy, and the need to pass it on?

Tasneem: When you marvel at the incredible talent that created Elephanta, Ajanta and Ellora, you begin to understand how evolved they were. And yes they were living in a different age but time works in cycles. If you read Gupta history or Roman history, with urbanization, they too faced similar issues of sewage, roads, and traffic. Of course not as we face them today, in a completely different context. But nevertheless, the same kind of dialogue was needed.

When you understand how humankind has developed it also helps you understand ethical issues. When you engage with culture it allows you to investigate moral positions. When you appreciate the choices other cultures, or other generations have made, you begin to think about your own choices.

I believe the human legacy is relevant not for philosophical or practical reasons alone, but because art in its broadest form invites us to go down the rabbit hole and discover a wonderland. And it is in the diversity of our conscious and our subconscious reactions that we begin to realize that even as we respond, we are uncovering things about ourselves.