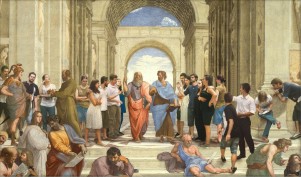 Philosophy is an approach to life, a search for a way to try to live a little bit better, a little bit truer, everyday. But by what moral standards should we judge our actions?

There is a difference between being immoral, and being amoral. Amoral means that there is no recognition of right and wrong and therefore you cannot act according to what is right. Immoral presumes that you do recognize right from wrong, yet choose not to live in accordance with this.

In my opinion, today we live in an immoral world, because we have an abundance of information that we refuse to act on. We know the effect we have on nature, we know the destruction that weapons can cause, and we know that what we do today will affect the lives of our children tomorrow; yet there is a great gap between knowledge and action.

What is required to fill this gap?

A change is needed. For centuries this change  has been material and technological. What is needed, however, is a far more fundamental change, a metamorphosis from within. If we  must “be the change we want to see in the world” then we must effect an inner transformation,  an inner revival.

According to Aristotle, the goal of all human activity is happiness. Buddha postulated much the same thing from a different perspective when he said that suffering pushes us forward in our search for happiness. They both asserted that this crucial objective could only be attended to through an inner investigation, and that neglecting internal development would be tantamount to neglecting everything that was essential.

However, life pulls us outward in many directions all the time. The chase after the material is so ingrained, that it happens subconsciously, almost without our participation, with the result that, even if we do want to change intrinsically, we must want it strongly enough to suppress all the forces that exist in our external life.

Can philosophy bring about such a change? The best example I can give you is of the Renaissance.

The Renaissance was a philosophical movement that blossomed in Europe from the 14th to the 16th century and irrefutably changed the world. In a relatively short span of approximately 200 years, Europe leaped out of the Dark Ages, a time of dogma, suppression and fear, into light. It was as if a magical wand had awakened the world. Science, Art, Music, Politics, Astronomy, and Philosophy, all saw tremendous blossoming. Most importantly, the force of imagination was set free, and endless possibilities lay open for Man, in recognition of man’s limitless potential.

History attributes many external factors to this magnificent revival, including political and financial patronage of the arts, the fall of Constantinople, the crusades, the discovery of the New World etc. However, in my opinion that would be devaluing the ability of the visionary men who spear-headed this revolution. I suggest they did it by digging into the inner well of Consciousness, deep within themselves. The impetus came from consciousness, not external factors and they knew they were making history.

The Italian Renaissance Poet Petrarch wrote, “As for you, should you survive me for a long time, which I sincerely hope and wish with all my soul, better times are perhaps ahead of you. Our present forgetfulness and this slumber will not last forever. The clouds will be dispelled and our successors will be able to return to the blossom of the pure light of ancient times.”

This was the central idea of the Renaissance. It was essential to awaken what was forgotten, echoing the ancient Greek tradition that spoke of the need to be awakened to who we really are. The idea was not new, it was a revival of an idea that had existed in antiquity, but was given a new form. Much like the idea of reincarnation that believes that when the soul reincarnates, it takes a new shape but its essence remains the same.

Perhaps today, we too need to be awakened from our sleep, to rediscover what is essential, searching not outside but within ourselves, in our past, and in our roots. Perhaps reviving some measure of the philosophy of the Renaissance is the key to rediscovering ourselves.

The spirit of the Renaissance was a complex interrelated combination of many timeless concepts:

Renaissance Men adopted the idea of a comparative method of study, not limiting themselves to any one tradition or faculty, in order to investigate and discern between what is essential and what is nonessential. The example of Leonardo Da Vinci demonstrates this investigation. A Painter, Sculptor,

Scientist, Inventor, and Philosopher, he was the quintessential Renaissance Man, whose many brilliant talents could not be defined by any one faculty alone, but by a philosophical approach to life: an aspiration to engage with the flowering of the human spirit.

Moreover, Renaissance Men believed that if you see your tradition as the only truth or the ultimate truth, you would never be open to something else. Therefore, it was encouraged to engage with philosophy, art, culture, science, and religion. They revered Hermes Trismegistus of Egypt, Zoroaster of Persia, Plato of Greece, the Jewish Kabbalists and many others; wisdom was not limited by time and place and so they embraced the ability to learn from all. This gave rise to the revival of the notion of a Universal Man (spiritually immortal) living in accordance with the principles of Universal Wisdom. This was in stark contrast to the Middle Age system of thought, which was characterized by materialism, separation and plurality.

During the Middle Ages man’s role was considered to be that of a passive spectator, obedient and unquestioning, in a fixed and unchanging world. With the advent of the Renaissance, man was regarded as obligated to effect change, as a partner in creation, as an ambassador of the Gods. Man’s primary objective was to take responsibility for his role in nature, and all study and investigation was meant to serve this goal; not to accumulate knowledge, but to implement it. We must respect wisdom with practice, not only with words.

Renaissance Men fought against the illusion that ‘what I see in the mirror is what I am’. Marsilio Ficino, who was the head of the re-established Platonic Academy patronized by the Medici Family, spoke of the human soul as having two wills: a will to drop downwards like stone, and the will to rise upwards like fire that gives light and rises towards the divine. This opposition of tendencies, one pulling us down and the other pushing upward, results in a constant inner battle, a battle in which we are free to exercise a choice.  As Pico della Mirandola wrote in his masterpiece Oration On The Dignity Of Man, God said to Man, “I have placed you in the middle of this world so that you can better understand all that is in it. We have made you neither celestial nor terrestrial, neither mortal nor immortal, so that as the free supreme model and sculptor of yourself, you can sculpt yourself into the shape which you have chosen.”

Man as a Mirror of the World

The Temple of Apollo at Delphi is said to have had an oft-quoted inscription: “Know thyself and Thou shalt know the World and the Gods.” In the Renaissance, man was once again considered a microcosm of the universe, the macrocosm. This gave man dignity, importance, and value in his ability to engage with life. The Renaissance philosophers believed that everything in nature has a valuable role. Man as the most evolved aspect of nature was uniquely capable of, and carried the responsibility, of the greatest role; specifically to maintain the harmony of the earth.  Man was a powerful and creative partner in the universe and neglecting that charge could lead to the destruction of our world.

The Renaissance did not arise by chance. Nor did it start with a clean state, a tabula rasa . Renaissance means revival; diving deep into the past, to revive ancient traditions and archetypes, or essential principles of life. By breathing life into these ancient traditions they knew they were creating something new that would blossom and flourish. It was akin to extracting some seeds from the past, planting them in the present and allowing them to create a future.

If man is to re-create, then perhaps his most important creation is the re-creation of himself. While death is a natural process that comes before a re-birth maybe there are other ways to renew ourselves, to renew the forces within us. But in order to do so, we need to conquer ourselves. This again is a familiar concept from many ancient cultures; an inner journey that pushes you to encounter yourself, leading to a deeper experience of mystery.

“Man is a being of wonder, worthy of respect and esteem, who assumes the nature of God as if he were himself a God.”

This was the aspiration of the Renaissance; to move closer and closer to the center, to effect change, to conquer the real self, in order to be re-born and become a better human being.

And perhaps, we too can follow their example today. Perhaps the real goal of philosophy is to touch this inner timeless wisdom; to build an inner Acropolis, an inner Hastinapur or Jerusalem – the idea of a divine city above, or the city within, that gives direction towards building an ethical and philosophical life, which inspires us to live every day with the aspiration for change and growth.

Let us not be part of the herd. Dare to live the adventure of Life; only then do you truly live, rather than merely survive. The real mystery of life is the mystery within us, and philosophy is a way to rediscover and revive that mystery within ourselves.

This article is a compilation of themes based on a lecture presented by Yaron Barzilay, National Director of New Acropolis Cultural Organization (India), in commemoration of UNESCO endorsed World Philosophy Day, celebrated each year as a way to “reaffirm the power of Philosophy to change the world by enabling us to change ourselves.” This presentation took place on 19th November 2015, at the Indian Express Gallery (Express Towers, Nariman Point. Mumbai.) 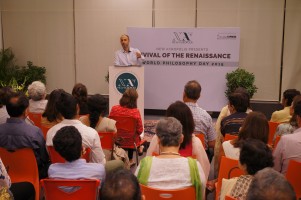 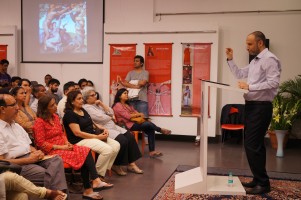 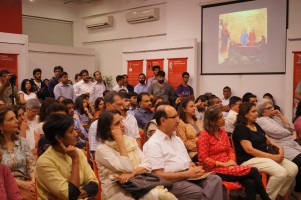 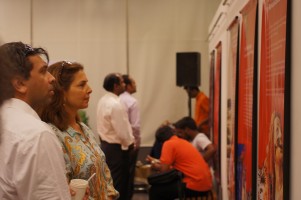