Education: To What End? 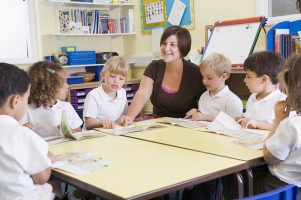 “Your children are not your children.
They are sons and daughters of Life’s longing for itself.
They come through you but not from you.
And though they are with you yet they belong not to you.
You are the bows from which your children as living arrows are sent forth.
The archer sees the make upon the path of the infinite, and He bends you with His might that His arrows may go swift and far.
Let your bending in the archer’s hand be for gladness.
For even as He loves the arrow that flies, so He also loves the bow that is stable.”
― Kahlil Gibran

Imagine a child. Does your face light up with a smile and your mind with images of carefree laughter, innocence and abundant energy? Now, look at a child, look into his eyes. Do you not see life waiting to express itself? A child embodies human potential waiting to burst through and manifest itself in its uniqueness. It seeks to know, to understand, to unravel mysteries with a sense of awe and joy. I remember a seven year old native of Hampi explaining why the stone pillars of the Vithala Temple resounded with the seven notes when struck. “The pillars are like a stretched rubber band. If you run your finger across a stretched rubber band, doesn’t it give out a sound?” Perhaps not a very accurate or complete an answer but what an observation…from a child who has never been to school!

As children, we too might have exhibited this same sense of wonder; the intuitive understanding that helped us to connect seemingly different things. Do we still have this ability? Or did we sacrifice it in order to conquer the school curriculum; lost in our endeavour to secure a “bright future”.

From the moment of conception, parents dream of how to guide their child to fulfil aspirations…often their own. I remember a parent of a three year old child asking, “Can you assess my daughter’s aptitude and say if she can become a surgeon like her father?”

The educational system is designed to assess-prepare-categorise. Is she suitable for our school? Can he recite the alphabet before even crossing the threshold of a school? Has she upped the benchmark of 98% in the boards? Does he have what it takes to become a Lawyer, a Software Engineer? Does it not sound like we are assessing if individuals can fit into a particular mould rather than extract the potential of each child? After surviving the rigours of school, we start the race for the “best” college or engineering program. A multitude of doctors, lawyers, and programmers are churned out from our academic institutions every year. No doubt, society needs them all…but one wonders: is this the goal of education? Reminds me of a Pink Floyd song: “We don’t need no education…All in all you are just another brick in the wall.”

With an increasing number of specialisations available in the educational field, it is believed that every individual now has the opportunity to become what he or she wants to be. The question is who decides what is right for each person? The parents? The educational system? Or perhaps, the individual himself? Also, does the existing system give the right input to allow students to really foster the expression of each unique potential? And where might this potential lead? Just a profession or a vocation that we are born to identify with? Or might it have more significant meaning?

By definition educere, the Latin origin of the word education, means to lead out or to draw out. This implies that the original intent of education was to give life to the potential that already exists within each child, each individual, so as to bring out the best of what lies within. The focus then, is on what lies within, rather than what can be fed from the external.

While our academic systems have their merits, they have many limitations too. Recognising this, a few alternate systems have emerged. The Montessori approach, for example, underlines this goal of education: not to bombard a child with facts, but to cultivate his/her own natural desire to learn. Maria Montessori, a 19th century Italian physician and educator, recognised children’s ability to direct their own learning. The Montessori approach allows children to choose their activities and learn tasks to suit their own needs at all levels – physical, social, mental and emotional.

In the early 20th century, The Waldorf Education was established by Rudolf Steiner stating, “Waldorf Education is not a pedagogical system but an art – the art of awakening what is actually there within the human being.”

What lies within, is the pivotal point. In The Republic, Plato states with respect to education, “Every individual should devote his life to what is best suited for him to do and the function of education is that of determining what every individual is by nature capable and fitted of doing.” Plato further states that the highest goal of education is “the knowledge of Good, to nurture a man to be a better human being, it is not merely an awareness of particular benefits and pleasures”. This transcends the paradigm of education as a means to gain knowledge, skills, or abilities, instead suggesting its function related to sculpting the quality of a man (or woman); how he is, what he can be, rather than what he can deliver or achieve.

The reader may well ask, why propose regressing to primitive times, with such advancements such as mobile learning and virtual laboratories as mediums of imparting education today. Well, because beyond all the progress we’ve made, it seems that our society and academic systems are paying a high price.

India has earned the dubious distinction of recording the world’s highest rate of suicides among people aged between 15 years and 29 years with failure in examination being cited in the top 10 reasons. Academic achievement (or lack of it) is regarded as a cause of depression in teenage students, and children as old as just five years suffer from performance anxiety. Clearly, this suggests that all is not hunky dory in the corridors of education. Of course, it would be dogmatic to deny that the same educational system has produced noble laureates, scientists and literati of international acclaim. And yet, looking at the highly educated, successful, exhausted, frequent flyer at an airport makes one wonder: has he found what he was seeking?

So what are we really seeking? The Greek percept of a human being may shed some light. Greek philosophers viewed man as experiencing three distinct realms: Soma, Psyche and Nous. Plato suggests that a holistic education would nourish the individual at each of these levels. Plato states, “Do not then train the youth by force and harshness, but direct them to it by what amuses their minds so that you may be better able to discover with accuracy the peculiar bent of genius of each”.
• Soma is the physical realm that constitutes the tangible, the body, the sharira.
• Psyche refers to the emotional and mental dimension which dictates our likes and dislikes, houses our feelings and desires, reflects our beliefs.
• Nous, our “highest” self, is our spiritual dimension. It is the eternal soul which reflects the ideals and the principles of the universe.

For the Soma, Plato suggested sports and right nutrition. Plato himself had mastered the art and sport of wrestling and was thus as much a “doer” as a “thinker”. To educate the Psyche, Plato recommended the study of the nine muses: Astronomy, Arithmetic, Geometry, History, Theatre, Poetry, Music, Rhetoric and Allegories – a curriculum that was designed to help students experience the order and beauty that exists in the universe, in life. And for the Nous, the spirit, Plato suggested Philosophy. It is through Philosophy, he stated, we can find truth and know who we really are.

Plato emphasised that education has to address the needs of a person as per his stage in life.  For children below 7 years who are essentially in the stage of “receiving”, he urged that they interact with nature so that they learn the fundamental principles of life and also understand their relationship to the world. By observing the diversity and the vastness of nature, a deep appreciation of the greater reality and a sense of humility can be instilled right from childhood. By exploring the world around, children also develop the quintessential tool of imagination which according to Plato, is the only way to relate to reality. In the pre teen years, when prana seems to be at its peak, to inspire and channel this boundless energy, Plato proposed tales of Heroism. Legends that emphasised values and an inner life, where children would be inspired to playact let’s say, Arjun, rather pokemon or Batman.  And the stage of adolescence, is the stage where education has to focus on facilitating the transition from a “receiver” to a “doer”, a “contributor”; where the seeds of a true “citizen” are sown.

Today, education seems to focus on pouring prescribed knowledge rather than allowing the child to acquire through exploration. It is resulting in restraining these bundles of energy behind desks rather than encouraging them to play outdoors, explore, observe and learn biology and physics through nature’s textbooks. Children are made to write even before their muscles have developed. Is it such a mystery then that they hate writing and are so restless and are labelled attention deficit and hyperactive?

Furthermore, the aim of education according to Plato is not merely personal growth but also service of the state. In fact, he is said to have viewed an individual’s growth as linked intricately with that of the state, the country. Here lies the crux; as long as education is viewed as a means to personal gain, the process of education is tainted and self limiting. When it’s very purpose is to go beyond the self, it facilitates a perspective that is not limited to achievement but rather, calls for contribution. It shifts the focus from “me” to “we”. In a world that is becoming increasingly polarised on many fronts, perhaps, an education that unites an individual with fellow human beings, connects man with nature, and harmonises the body and soul, is the answer.