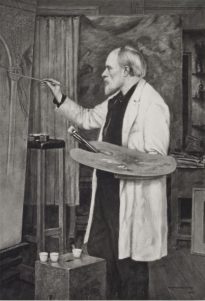 Recently, the Tate Britain celebrated Sir Edward Coley Burne-Jones with a grand exhibition, the first on such a scale in 40 years. It amazed visitors not only by the rich variety of works, including painting, tapestry and stained glass, but also by a special enigmatic beauty created by the artist.

Born in industrial Birmingham, Burne-Jones witnessed the rapidly developing Britain of the 19th century, its industrial coarseness and rampant materialism. And his response to it was otherworldly Beauty. He dedicated his life to the ideal of Beauty and aimed at bringing it into everyday life.

“I have no politics, and no party, and no particular hope: only this is true, that beauty is very beautiful, and softens, and comforts, and inspires, and rouses, and lifts up, and never fails.”

The artist seems to have been born with a talent. He never received a formal education in art, but already at grammar school was drawing a lot with great speed and mastery. He abandoned his theology degree at Oxford University to dedicate his life to art after an artistic trip to France he had undertaken together with his friend William Morris. After Oxford, he settled in London. His mentor, the Pre-Raphaelite founder Dante Gabriel Rossetti, and the artists of Renaissance Italy contributed to shaping his talent.

Inspired by classical and medieval myths, Burne-Jones became part of a chivalric revival. His works are permeated by the idea of a quest and bring to this world unforgettable depictions of Arthurian legends and the journey of Perseus, amongst others. Another painting, one of his last major works, “Love and the Pilgrim” (1896-7), beautifully depicts the hardships of a quest, its thorny path and the angel that guides and heals and liberates – Love.

Burne-Jones is an amazing storyteller – he transfers you to the otherworld in a powerfully vivid manner. When following his “Legend of Briar Rose” series depicting a moment from the fairy tale of Sleeping Beauty, one can easily become truly drowsy and yawn. The Perseus Cycle with its colours, bleak background and dynamic forms transmits amazingly well the dangers of the hero’s journey, the enormity of his task and his bravery in the fight with the monster Medusa. The artist’s vividness seems to be the result not only of his mastery, but also of his profound knowledge and understanding of symbolism.

From his works it seems that the artist could tap into the invisible dimension and bring it to the eyes of those living here, in the material world. His intellectual grasp, his sense of widespread wonder and beauty enriched his works with a depth that keeps on mesmerising viewers.

Burne-Jones, also called the last Pre-Raphaelite, became a bridge between the Victorian and modern eras. He made a lasting impression on the Symbolist painters, impacted Munch, Klimt and the early Picasso. His designs helped to shape the emerging Art Nouveau style. But most of all he brought the wisdom of ancient legends to life so that people could once again experience and evolve through this contact with an eternal reality.