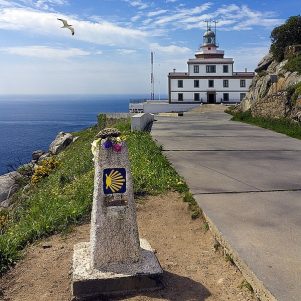 Where did it start? Where does it lead?
The phenomenon of pilgrimage has been present in society since the beginning of times. There may be different incentives to do a pilgrimage. The Cambridge dictionary gives a very simple, but accurate definition: a visit to a place that is considered special, where you go to show your respect. This includes pilgrimages for religious purposes or otherwise, done on foot, by bicycle, horse or car to different destinations across the world. Nevertheless, the modern revival of the idea of a pilgrimage is probably most highlighted by the unprecedented popularity of the Camino de Santiago (Way of St. James) in Spain.

But let’s start from the beginning… St. James was the eldest son of Zebedee and Salome and grew up in a fishing village on the banks of Lake Galilee. When James and his younger brother John were mending a net by the lake, Jesus passed by and spoke to them of his mission. Both brothers forsook their nets and followed the Master. According to the Golden Legend, after the physical death of Jesus, James the Apostle taught in the Jewry and Samaria, and from there was sent to Spain to spread the word of Jesus Christ. He is said to have preached in the wind-swept hamlet of Mugia (Muxia) on a narrow isthmus near the cliff of Finisterre. Later the Apostle decided to go back to Palestine where he was killed by the Jews. The decapitated body of St. James was then taken by his disciples back to Galicia in Spain, where, following a series of miracles, Queen Lupa granted her permission to bury the body of the apostle in a place which later was to become Santiago de Compostela.

It took 800 years for St. James to re-emerge from the mists of oblivion when the circumstances were very different from those of Roman Spain. At that time, almost the entire peninsula was dominated by Muslims, with the exception of the last few centres of Christianity in the north, mainly the Kingdom of Asturias, which then included Galicia and Leon. The story now takes us to the semi-legendary hero, Pelayo, a leader of Christian ascetics living around the Cave of Covadonga (in the Picos de Europa mountains of Asturias). One night during his meditation, Pelayo saw a big star burning low over a thickly wooded hill near the River Sar. Together with his fellow hermits and shepherds, they followed the star to the bottom of the hill and there they started to clear away the undergrowth. Soon they came across a little shrine believed to be the very same place where eight centuries before the decapitated body of St. James had been laid.

For over a thousand years pilgrims have been treading the routes to Santiago de Compostela to pay their tribute to the apostle. Not only has the tradition not diminished with time, but quite the contrary, it seems to be gaining momentum year after year. The most popular route is also the most historically significant – the Camino Francés or the French Way (769 km), which leads pilgrims from the French town of St Jean-Pied-du-Port through the Pyrenees to Spain. Over 60% of all pilgrims to Santiago choose this route as it provides all the necessary facilities and is the best marked of all. However, there are many more trails to choose from and each of them seems to have its own unique character.

Why has there been such a revival of this ancient “Jacobean pilgrimage” in recent decades? The answer is obvious to those who have taken the challenge – it offers a drastic change of view point. You have no other choice but to become the path you are walking and simply take it as it comes, with acceptance, compassion and patience. It enhances your outer and inner senses, brings you ever closer to nature and helps you see yourself again with full clarity. Remember, the depth of your struggle will determine the height of your success. Enjoy your journey, pilgrim!

Recommendations based on my personal experience of the Camino: