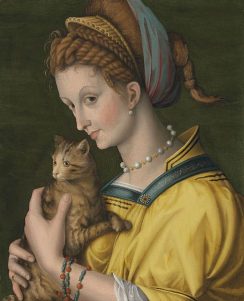 The title of this article comes from a book by Umberto Eco, an Italian philosopher, essayist, professor of literature and novelist, most famous for his medieval whodunnit The Name of the Rose, which was made into a film starring Sean Connery.

In this book, Eco introduces us to a culture very different from our own. Yet the principles contained in his study can enlighten us about the whole question of beauty, so central to the world of art – and to human life in general. The first thing to realise is that much of the philosophy of the Middle Ages comes from the classical world and particularly from Neoplatonism. The basis of Platonic and Neoplatonic aesthetics is that the beauty of the world is an image and reflection of Ideal Beauty (a beauty that exists in some spiritual dimension beyond the material world).

However, the medieval world was not the Classical world of Greece and Rome, it was also heavily imbued with Christianity and was more religious in its outlook, while at the same time having a spontaneous love of light and colour, and a strong feeling for the sensuous properties of things. Colours in medieval art and literature are simple and primary, which perhaps reflects a simpler and less sophisticated time of history. ‘Apart from single colours, however, philosophers and mystics alike were enthralled by luminosity in general, and by the sun’s light.’ The effects of light in Gothic cathedrals are a supreme example of this.

However, there was no separation between this spontaneous love for sensuous beauty and the mystical sense of beauty as the reflection of the divine, for the Medievals discerned ‘in the concrete object an ontological reflection of, and participation in, the being and the power of God…. Life appeared to them as something wholly integrated.’ John Scotus Eriugena, an Irish Neoplatonist philosopher of the 9th century, conceived of the universe as a revelation of God in his ineffable beauty.

So, what was beauty for these medieval philosophers, mystics, poets and artists? We have a number of definitions, from the relatively simple one by St. Augustine that was of central importance in the Middle Ages – ‘What is beauty of the body? A harmony of its parts with a certain pleasing colour’- to the more complex definition set out by Robert Grosseteste (an English Neoplatonist of the 13th century): ‘Beauty is a concordance and fittingness of a thing to itself and of all its individual parts to themselves and to each other and to the whole, and of that whole to all things.’

Understanding their mystical view of the world can also help us to understand the importance the Medievals gave to heraldry and symbolism, because all things and beings in Nature are ‘reminders and overtones of Divinity, manifestations of God in things.’ Eriugena said, ‘In my judgement, there is nothing among visible and corporeal things which does not signify something incorporeal and intelligible.’ And as Umberto Eco puts it: ‘We have merely to cast our eye upon the visible beauty of the earth to be reminded of an immense theophanic harmony… The face of eternity shines through the things of earth and we may therefore regard them as a species of metaphor.’ Or, in the words of another medieval philosopher, Hugh of St. Victor, the earth is ‘like a book written by the finger of God.’

In the 13th and 14th centuries, with figures like Thomas Aquinas and Roger Bacon, the world view began to change, the mentality began to become more scientific and the world ceased to be a ‘forest of symbols’. Something was lost and something was gained, but now we can look back and realise that, in the words of the German literary scholar E.R. Curtius, ‘Contemporary man places an exaggerated value on art because he has lost the feeling for intelligible beauty which the neo-Platonists and the Medievals possessed… Here we are dealing with a type of beauty of which Aesthetics knows nothing.’