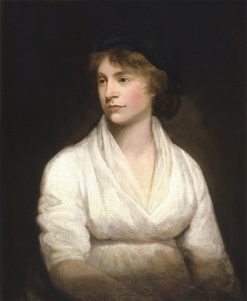 In the mid-18th century, when London had approximately 600,000 inhabitants, a woman with remarkable ideas was born in Spitalfields. Her approach to life and her fight for equality between women and men, in a society that was far from equal, made her stand out from the crowd. Her words “I do not wish (women) to have power over men; but over themselves” clearly transmits the idea of working together towards a mutual improvement. Today, unfortunately, not many people have heard about her; her daughter Mary Shelley, the author of Frankenstein and wife of the poet Shelley, is probably more famous. However, there now seems to be a revival of her work and there is currently a campaign for a memorial to be created in the Newington Green area of London in order to honour her contribution to thought and society.

Considered as the foundational feminist philosopher and an advocate of women’s rights, Mary Wollstonecraft grew up in a family where instability, domestic violence and financial difficulties were ever-present. Perhaps it was these scenarios that influenced the great interest she developed during her life in supporting and looking after women, which began with the care of her mother and her strong relationship with her sisters. Her passion motivated her to open a school for girls, in which she was able to teach and learn about education, and her insights became part of her first work ‘Thoughts on the Education of Daughters’ (1787). Having read the book myself and being a mother, I was able to draw some clear and useful parenting tips, such as teaching our children to think for themselves; encouraging virtues at home; promoting the good use of the mind through reading and the fine arts; helping to form their characters and leading by example. Sadly, due to financial problems the school had to close, but a year later Mary started her journey to becoming a writer, which was a brave move for a woman in those days, as few women had access to education and most readers were men. She also developed her skills as a translator, reader, reviewer, editorial assistant and even learned other languages such as German and French. All of these were significant steps in broadening her mind and becoming aware of the socio-political events that were taking place at the time, notably the French Revolution.

The work she is best known for is ‘A Vindication of the Rights of Women’ (1792), one of the main proposals of which is that both girls and boys should be offered access to free education. She also focused attention on the importance of teaching children to reason, seeing reason as ‘the most heaven-lighted lamp in man’. She stated that women are not naturally inferior to men and that both should be treated as rational beings who deserve the same fundamental rights. Her particular style of writing, knowing that she was addressing mostly male readers, endeavoured to explain how by educating women, society would have more chances to flourish. Women would no longer focus only on superficial aspects – such as cosmetics and clothes – and their role would be enriched by going beyond being only mothers and wives.

Today, in our modern world, the topic of gender and equality appears frequently. Women are still striving for equal rights and are challenging stereotypes. Perhaps some of the light of Mary Wollstonecraft’s wisdom could penetrate our minds by inviting us to reflect on the way she understood the rights we all have. That implies acknowledging that both men and women have the ability to reason, and that this is the greatest gift available to us. After all, it is thanks to reason that every human being can exercise the power of questioning and finding rational grounds when debating with a fellow human being. In a society that is currently experiencing instability and uncertainty, I believe women and men can work together as companions, helping each other to develop a virtuous life and a deep sense of moral goodness. And hopefully, inspired by Mary’s ideas and through a real education that encourages independence and a holistic development of body and mind, we can witness a brighter and better future. In the words of Mary Wollstonecraft, ‘the beginning is always today’.