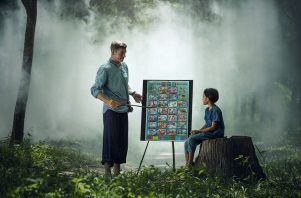 The concept of wisdom is deeply rooted in human history. It has been considered a virtue in all the great philosophical and religious traditions, from Pythagoras to Plato, Aristotle and Confucius, and from Christianity to Judaism, Islam, Buddhism, Taoism and Hinduism. But although the literature on wisdom goes back to the early days of humanity, it seems that it was only in the mid-eighties that the first empirical work on wisdom took place, with the development of the Berlin Wisdom Paradigm. However, in recent years the number of wisdom-related studies has greatly increased, and in 2016 the University of Chicago launched the Center for Practical Wisdom where wisdom has become ‘a topic for rigorous scholarship and scientific investigation.’

Wisdom rests on many pillars and its nature is so deep and rich that no one definition will do it justice. But it is generally associated with sound judgement and choices, empathy and benevolence, self-knowledge and the ability to self-reflect, a larger perspective and the understanding of long-term impact, a balance between self-interest and the common good, emphasis on purpose over pleasure, an insight into the causes of things and, as Aristotle said, knowing which ends are worth striving for.

It might be interesting to reflect why there is suddenly so much renewed interest in wisdom. Ursula M. Staudinger, a German psychologist and Professor of Sociomedical Sciences and Psychology at Columbia University, thinks that it has to do with greater pluralism in society and the fact that increasing living standards provide us with more options in life. Until the beginning of the 20th century, life was much simpler and we did not have to make so many choices. Now, we are faced with multiple options for every single aspect of our lives and it is natural that we are looking for some form of guidance to make the right decision.

At the same time, globalisation has brought different cultures with very different value systems closer together, which means that the traditional framework for navigating life has been challenged and is no longer able to provide sure references. One reaction to this increase in uncertainty and ambiguity has been fundamentalism, which is an attempt to return to clear-cut, black-and-white and easy rules. The other response to this same problem of our postmodern and deconstructivist times is the quest for wisdom, one of whose attributes has been defined precisely as tolerance for ambiguity and the ability to consider diverse viewpoints and create a synthesis.

Another aspect of our modern times is that, through the increase of our knowledge and our technological means, our power to act and the impact of our actions have also increased to such a degree that we can now also cause a lot of harm. Isaac Asimov once said that ‘the saddest aspect of life right now is that science gathers knowledge faster than society gathers wisdom.’

The contemporary British philosopher Nicholas Maxwell thinks along the same lines. He has devoted much of his working life to arguing for the importance of wisdom and the urgent need to learn how to acquire more wisdom. In 2003 he founded Friends of Wisdom, an international group of people sympathetic to the idea that academic inquiry should help humanity acquire more wisdom.

On the website of Friends of Wisdom he writes: ‘We need a revolution in the aims and methods of academic inquiry. Instead of giving priority to the search for knowledge, academia needs to devote itself to seeking and promoting wisdom by rational means, wisdom being the capacity to realize what is of value in life, for oneself and others, wisdom thus including knowledge but much else besides. A basic task ought to be to help humanity learn how to create a better world. Acquiring scientific knowledge dissociated from a more basic concern for wisdom, as we do at present, is dangerously and damagingly irrational.’

I could not agree more. Here’s to the title of his paper: Knowledge to Wisdom: We need a Revolution.