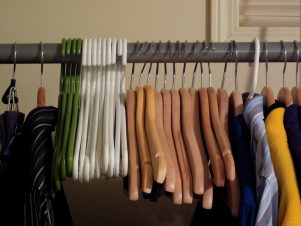 I would like to shine a light on the fashion industry. Even if you are aware of documentaries like Fashion’s Dirty Secrets, it is worth reminding ourselves of just some of the facts, because writing and spreading information is already a form of activism.

Alongside the oil industry the fashion industry is one of the top five most-polluting industries in the world. Globally we are producing over 100 billion new garments from new fibres every single year. Between 2000 and 2015 the number of global clothes sales has doubled. As a consequence, in the UK alone, we throw more than 300,000 tonnes of used clothing (worth £12.5bn) into the bin. These clothes end up in landfill where they release methane, a greenhouse gas, as they degrade. Most of the clothes would still be perfectly wearable.

In order to produce such a staggering number of clothes, a huge amount of toxins are necessary. The Citarum River in Indonesia, on which the local people rely for their water supply, is considered to be the world’s dirtiest river. It contains toxic levels of mercury, cadmium, lead and arsenic. These are caused by the 400 factories that release toxic chemicals into it every day. 68% of these factories are textile producers who dump an estimated 280 tons of toxic waste into the river every day!

One of the worst materials regarding toxic side effects is cotton, which makes up 43% of all clothing, because the production process is extremely polluting and uses huge amounts of water. For example, to grow the cotton used to make just one pair of jeans can take over 15,000 litres of water and just one T-shirt may use up 2,500 litres of clean water – the amount a person in Africa would need to survive for 4 months. Cotton farming has been the main reason for the drying up of the Aral Sea in Kazakhstan, which in 1960 was the world’s fourth largest body of inland water covering 68,000 sq. km and is now reduced to a fraction of its size.

Cotton production also accounts for 18% of pesticide use worldwide and 25% of total insecticide use. Although we don’t eat our clothes, our skin can still absorb these trace chemicals by wearing these clothes. But the worst effect is that the people who work within the production of cotton are being poisoned by the heavy pesticide use. Even in the US more than 10,000 US farmers die each year from cancers related to such chemicals. And people who have no alternative than to drink from water supplies near cotton farms run the serious risk of ingesting all the pesticides that have seeped into the ground.

Since we know all this now: can we really carry on with our usual way of life as if we didn’t know? Can we really be happy about a ’bargain’ if the true cost of our new purchase is the millions of gallons of fresh water that were polluted with toxic chemicals in order to grow the fibres and dye the clothes?

If we know, we cannot pretend not to know. At least not as moral beings. And we cannot absolve ourselves from our responsibility either by saying that we can’t change the system. Change happens if we start doing things differently, if we live it daily in our lives. Every individual either contributes to the problem or to the solution. Based loosely on Kant’s categorial imperative: we should ask ourselves before every action whether the consequences were good if everyone acted in the same way. The native American Indians (the Iroquois, to be precise) give very similar advice: at every decision we should consider how it will affect the seventh generation from now.

Time to practise what we know. By this I don’t mean to run around in rags. But we can all buy less, buy organic cotton, buy in charity shops, swap clothes. Collectively, the difference would be huge.