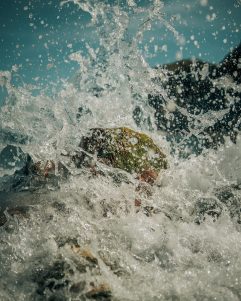 Many ancient traditions unequivocally describe the role of sound in the divine process of creation. The Bible declares, “In the beginning was the Word and the Word was with God and the Word was God”. (1) Hindu and Buddhist traditions believe that OM is the sound of creation, of the unmanifest diversifying into all the variations of energy that make up our universe. If sound characterizes creation, the realm of multiplicity, then is unity characterized by silence? Since we live in a deeply sonorous universe, perhaps the search for that sacred silence might invite us to turn inwards.

Sound, be it music, the lilt of nature, the voice of a loved one, or a comforting prayer, has the ability to touch, re-arrange, or shift something deep within us. It can evoke memories, awaken sentiments, and heighten our connection to our mysterious, enshrouded core. Sound can be a bridge to the innermost recesses of our being and because of this unique capability, the ancient metaphysical system of Naad Yoga, uses the power of sound to achieve an evolution of consciousness, and union with the metaphysical. Naad means ‘essence of sound’ or ‘flow of sound’, and yoga means ‘union’ or ‘path’.

The Natya Shastra, the pivotal treatise from which it is said all classical arts of the Indian tradition emerge, refers to art as a ladder to reach the divine. Through meticulous practice, exacting discipline and unflinching devotion, the artist’s aim is understood as the ability to use the mode, structure and process of art to pierce through the veil between the visible world and the realm of the invisible: to use the form, to experience formlessness, a plane of consciousness that transcends limitations of time or space.

Accordingly, Naad Yoga is described by practitioners as an intense concentration on a certain sound, following it deeply inwards, using it as a means to touch areas of consciousness that are usually inaccessible. The syllable OM is particularly suited to this meditation as it closely resonates with the continuous drone of the Tanpura, an Indian instrument, which creates a cascading harmonic range of overtones in a continuous loop. Its constancy serves as a metaphor for the eternal, the immovable and everlasting, which is a contrast to the ordinary human condition in a constant state of flux; our energies, moods, and thoughts rising and falling with changes in our internal and external environment.

Disciples of certain schools of classical Indian music, for example rise at 4am, to practice svar sadhna, the recitation of a single note, over and over again, sometimes for up to 45 minutes, immersing oneself so completely into the sound so as to experience a dissolving of the cloak between the self and the sound.

Noted vocal artist Chintan Upadhyay (M.A. Classical Indian Music), who has been teaching and performing the ancient Dhrupad form of music, both internationally and across India, was hosted by The Culture Circle at New Acropolis (Colaba, Mumbai). During the intimate and inspiring recital he explained his experience of this enigmatic and almost alchemical process: “If I sing the same note a hundred times, I may have a hundred different flavors of the same note due to the layers of the personality [moods, emotions, thoughts, etc.] So, you are revealing who you are using the instrument of sa. Soon something happens deep within you. Secrets inside you come to the surface if you give it time. You have to empty your vessel of everyday thoughts to be able to receive from the higher. Then if you are very lucky, you find one day, that sa sa nahin rahetha aur aap aap nahin [that sa ceases to remain a note, and you cease to be you]. You become the sa, and the sound beyond the note.”

“That which has created, and which is holding, and in which is held the whole manifestation and the whole cosmos, is one power, and that is vibration”. (2)

The science of Naad Yoga begins with the idea that it is not matter, but different forms of energy that are the building blocks of our universe. This idea ties in with modern faculty of String Theory which, at the risk of oversimplifying, postulates that everything in our universe is made up of microscopic strands of energy, vibrating at different frequencies. Hence, everything from the planets and stars, to atoms and the cells that constitute the human body, is constantly vibrating! And since each vibration has its own distinctive frequency, the resulting sounds around us, and within us, become the subject of meditation in Naad Yoga. (3)

Naad Yogis practice listening deeply, attentively and reverently, to these inner sounds, with the purpose of descending inward, to discover the divine nature within. It is said that with arduous practice and tireless determination, an inner reversal begins to take place; the overt, active and outwardly energetic activity begins to recede, and the part which was so far dormant, awakens.

This inner transformation demands effort and perseverance. But paradoxically as any disciple on the path will vouch, the more assiduously one works, the more surplus energy is generated, and the more one can tirelessly work.

It is noteworthy that we have the ability to filter out external sounds that engulf us continually, and thankfully, we are not attuned to the many internal sounds our bodies constantly make. Otherwise, we would be completely overwhelmed with the quantum of sonic information. Naad Yoga cultivates at once, both the broadening and the focusing of sensitivity, to listen intensely and profoundly. It differentiates 4 kinds of sound, from the most obvious to more and more subtle (4):

If para is described as sound beyond our human perception, what then is silence? Mystics of many ancient traditions have recognized silence as the origin, the backdrop against which all sound is heard. In Sufism the silence “from which all vibrations arise and into which all vibrations dissolve” is called Zat, Buddhists refer to Shunyata and Hindus call it Naad Brahman, the soundless sound, the universal consciousness. (3) Furthermore, it is fascinating that Naad Yoga also differentiates between different levels of silence. As one ‘listens’ to this silence, one might become aware of the still deeper silence behind it, forming a backdrop that makes it ‘audible’. It is in following this thread deeper and deeper within, by peeling back these layers of silence that we become perhaps, as Kahlil Gibran so poetically described, “seekers of silences”. (5)

Can this ancient, complex and seemingly esoteric practice, which dates back to the Naad Bindu Upanishad of the Rig Veda, have significance in our daily lives today? For me, this investigation inspired a much deeper reflection on the various sounds I encounter every day. Realizing the power and potential of sound that tradition seems to suggest, perhaps we can begin to listen with more attention and sensitivity. While taking a bath, for instance, we can try to concentrate on the sound of running water, therapeutic and purifying, to cleanse ourselves within, even while we clean ourselves without. Or we might develop the concentration to effectively filter out noises, to hear more acutely the chirping of the birds. What if we exacted better control of the sounds we contribute to the vibrations of life, by choosing more discerningly our words? This, in actuality is the most crucial change we can immediately make.

Our words have immense power. They channelize a creative force that express as action and ultimately create our reality. It is critical then that we learn to bring more accuracy, objectivity and positivity to our speech, as The Buddha enjoined his followers to do in his teachings on Right Speech, or maintain Noble Silence.

Many traditions describe the human being’s present condition as a ‘fall from grace’, a forgetting of our true nature. It seems that Naad Yoga, the yoga of Sound, was conceived as a powerful and potent tool to awaken us to a universal consciousness, to remember the silence that was, and always is, our true home. Perhaps in this way we can attune ourselves a little bit more to the music and harmony of Nature; to learn to proactively listen to, what Pythagoras might have referred to as “the music of the celestial spheres”. And to remember, as Plato said, that we are God, so that we might reclaim our potential; to become who we can be… today.

“There is no other laya (absorption), which equals the naad (internal sound).” – Hatha Yoga Pradipika