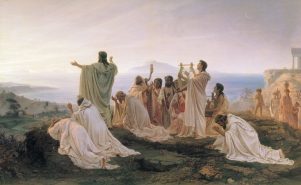 Today, there is a deep divide between these two fields and, for most people, they are seen as antagonistic. Religion is about faith, or blind belief (in the popular imagination), while philosophy is about reason. Faith seems to be in contradiction with reason. Can this opposition ever be resolved?

At its root, however, religion is not about faith, but about union with “God”, by which is meant the ultimate source of everything, whatever that may be, the ultimate mystery. If a philosopher is defined as a lover of wisdom, a seeker of truth, a person in pursuit of knowledge, will he or she not also be interested in the ultimate cause of all things?

The question is not so much whether the philosopher will be interested in that question, but whether philosophy can lead to the discovery of that Causeless Cause. Most of the philosophers of antiquity, notably Plato and his successors, maintained that this is indeed the ultimate goal of philosophy: to lead to the discovery of Reality. Plato presents this view in his “Allegory of the Cave” in the Seventh Book of the Republic. In this allegory, the philosopher treads the path from the darkness of ignorance, through the deceptive shadows of opinion, to the final light of Truth, symbolised by the world outside the cave, illuminated by the brilliant light of the Sun.

Like the philosophers of India, Plato describes how, by pacifying the senses and training the mind in discernment and stability, a philosopher can reach a state of inner serenity where he or she will be able to see clearly. In that condition, Truth will dawn on the mind, like the sun rising over the mountains and illuminating the glittering surface of a calm lake. Philosophy is the means to reach this state of vision, which could be likened to a divine illumination, which is also the goal of religion.

However, one would not think of Plato as a religious person, although he believed in some form of “God” and even “Gods”. At the same time, he was very critical of the religion of his time, its view of the Gods as venal, unpredictable beings with passions and flaws very similar to our own, as if they had been made in our image and not the other way around.

What, then, is religion, and how does it differ from philosophy? Although in essence religion can be said to be a path towards re-union (possibly deriving from the Latin religare = to bind together again), that is to say, a path towards becoming reunited with one’s true self, with all beings, and with God as the transcendent cause of all; in practice, religions offer a specific way of life, with rituals, prayers, meditational techniques, designed to lead towards that goal. They will often be divided into two or more levels: a more intense practice, such as monasticism, where the whole life of the individual is dedicated to that end; or a less intense way where the follower of the religion is enjoined to adhere to a code of morality and perform a series of actions or rituals, such as pilgrimage, almsgiving, or attending religious services in church, mosque or temple. For many believers, this is a way of securing happiness in the afterlife, although this is not, I would suggest, the essence of religion, in the same way that mere discursive reasoning and the discussion of ideas is not the essence of philosophy. Both religion and philosophy are, I would suggest, at their highest levels, mystical activities, in the sense that they both aspire to attain contact with the highest Truth, which dwells in the region of the “Sacred”.

How, then, did the division between religion and philosophy come about? I would suggest that it arose as a reaction to the tyrannical sway that religion held over everything in the Middle Ages, when people could be burned at the stake for holding views considered to be “heretical”, or contrary to the tenets of religious faith. So, when philosophy became free of the shackles imposed on it by a narrow-minded form of religion, it moved further and further away from religion, and in many cases rejected it entirely, as if it had become “allergic” to it.

In the twentieth century, a number of scholars such as Joseph Campbell and Mircea Eliade began to rebuild bridges between religion and philosophy. One day, I am sure, the unity will be restored: religion will become more philosophical and philosophy will become more mystical. Reason and faith will cease to war with one another and will realise that they are brother and sister, that they can walk together harmoniously on the arduous path towards Truth.