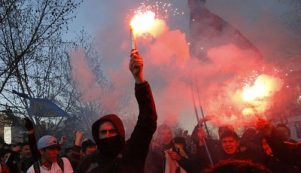 History teaches us that civilizations rise and fall; since they are born, they will also eventually die. Some die a dramatic death; others simply fade out and become gradually replaced by others. It makes sense to study how past cultures and civilizations died and see what we can learn from it. These days, you can do a master’s course in Paris on collapsology – or, the ‘risk of collapse and adapting to it’. The thesis is that this kind of collapse could also happen to our current Western industrial societies.

According to Jared Diamond, an academic and the author of the 2005 book Collapse: How Societies Choose to Fail or Survive, we are already witnessing the conditions for collapse in a number of different countries: “Just as in the past, countries that are environmentally stressed, overpopulated, or both, become at risk of getting politically stressed, and of their governments collapsing. When people are desperate, undernourished and without hope, they blame their governments, which they see as responsible for or unable to solve their problems. They try to emigrate at any cost. They fight each other over land. They kill each other. They start civil wars. They figure that they have nothing to lose, so they become terrorists, or they support or tolerate terrorism.”

If we did a health and safety risk assessment of our planet, we would flag up quite a lot of severe threats: water shortage, soil degeneration, climate change, overpopulation, pollution and toxins, inequality, fragile economies, etc. According to Diamond, they are all time bombs that have fuses of between a few years and no more than 50 years. Our present course is not sustainable and either we choose to change, or we will be forced to change. As in every health and safety check, it makes sense to list the possible threats and to prepare for them.

However, there are always those who don’t want to see the writing on the wall and prefer to declare these studies as ‘apocalypticism’ and some sort of religious eschatology. But trying to assess the possible outcomes of our current problems and preparing for them is not the same as promoting catastrophism. When the Soviet Union collapsed it did not mean that everyone was going to die. When the Roman Empire fell, the world continued, but not the world as the Romans knew it. The failure to perceive the problems and to anticipate future consequences has, in fact, been one of the contributing factors to the collapse of past civilizations.

One reason why problems were not perceived is, according to Diamond, “a conflict of interest between the short-term interest of the decision making elites and the long-term interest of society as a whole, especially if the elites are able to insulate themselves from the consequences of their actions.” Let’s say you are a wealthy landowner and you could make a fortune by logging your forests, farming your land industrially, mining the rare minerals that are under your soil despite the destruction and pollution that might cause, selling off the land to ruthless developers – would you abstain from making a lot of money for the sake of the whole and of future generations?

Well, most of those who were able to make these kinds of decisions in the past did not abstain and this is where the real crux lies: our current problems are man-made and one way or the other the result of a thinking that places the highest value on what is profitable. And if this kind of ‘economic’ and materialistic thinking continues to dominate our collective decisions and if we as individuals continue to succumb to instant gratification, then our industrialised civilization is going to hit the wall.

If corrupt values and a wrong kind of thinking brings down civilizations, then sound values and sound thinking will raise up new civilizations. So, yes, we do need to talk about collapsology; and in this context we need to talk about the human values and mindsets that we will need in order to overcome the challenges we are facing and to create a better way of life and offer an education that will help us to become more altruistic, more cooperative, more generous and more open to reason than to desires. The future remains open but there is no point walking towards it with our eyes shut.