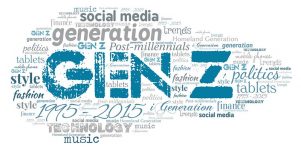 Generation Z is the most widely known term used to distinguish the post-millennial generation born after 1995. However, this classification is not necessarily the most illuminating or the one chosen by the generation themselves.

A New York Times article (Jan 2018) discusses several options ranging from the abject – ‘the last generation’ ‘the final generation’ and ‘doomed’ all the way to the article’s conclusion and the author’s favourite – ‘Delta Generation’ or ‘Deltas’. Quoting directly from one respondent Kelsy Hillesheim, 22, “Delta is used to denote change and uncertainty in mathematics and the sciences, and my generation was shaped by change and uncertainty,” […] “We are not passive products of circumstance, but active members of society with agency to affect the course of history, and will to build each other up to make things better” […] “We know all too well that adults aren’t doing so today.”

From a recent Time Magazine article we also have ‘the Founders’ which MTV has unveiled as the name they are going to use to describe their emerging audience. MTV President Sean Atkins says the name (the Founders) acknowledges that while millennials have disrupted society, it’s this new generation’s job to rebuild it. “They have this self-awareness that systems have been broken,” […] “MTV says its research shows that younger teens today see a world drastically disrupted. Facebook and Google have upended the news business. YouTube has disrupted television. Airbnb and Uber have unsettled long-established industries like hotels and taxis.”

This generation are the first ’digital natives’: they know of nothing else and technology is an extension of their physical realities. They are also natives of terrorism, in the sense that many will have been born after 9/11 and very few if any will be able to recall life before ‘the war on terror’. They are also natives of economic uncertainty, growing up during a global financial crisis and living with austerity politics and recession. “They’ve grown up without a safety net,” says Jane Gould, MTV senior vice president of consumer insights and research (Time Magazine).

Perhaps the exposure to violence and economic uncertainty experienced with the open-hearted clarity and innocence of childhood has significantly influenced this generation. Much of the research into this group cites a key trait they share, which is their concern for others, for the greater good, the environment and ‘altruism’. In her summary of the key attributes ‘Generation Z Goes to College’, Meghan Grace says: “They are motivated by making a difference for others and not so much by public recognition.” […] “They are social-change minded and would rather engage in community work that addresses the underlying cause of an issue than engage in short term service to address the symptoms.”

We can learn that from a philosophical point of view this generation have already had exposure to some of the ups and downs of life, but they are not jaded or disheartened and are not overly-attached to the forms and nostalgia of easier times. They have seen something of impermanence and intrinsically seem to value the health and happiness of ‘the whole’.

One of the challenges that this generation may face is that whilst being community-minded they also prefer to learn individually, their ideal learning environment being themselves armed with the internet – they can self-discover all they need to know. However, with the increase of fake sources in all areas of the media this could prove to be problematic if this generation doesn’t engage in more established sources and ultimately, from a philosophical point of view, with the perennial wisdom and unchanging laws that govern life.

There is also a tendency to reject existing structures of community work and volunteering, preferring instead their own methods and own innovation. Crucially, however, they identify themselves as ‘doers’ and not ‘leaders’. It could be that group work which does meet their expectations could be difficult, it will be far easier for them to achieve individually than as a group. With this in mind, we can learn that a transition into leadership could be a vital key for this generation. According to a study by Bond, a group working for engagement in international development, groups wishing to work with the new generation should seek to ‘align altruism and self-interest – “developing their leadership skills so they can become agents of change themselves.”