Stepping Back into The World of Heroes 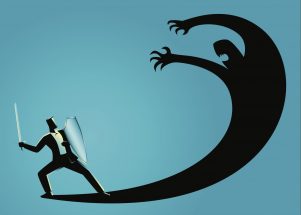 A child’s journey to adulthood is often a mixed bag. It’s a time of learning and challenges. Skills and abilities are developed, as are likes and dislikes. He quickly learns the rules of the world that he lives in.  And facing a new world for the first time, his simplest obstacles look like gigantic monsters. In these daunting encounters, heroes and their tales of magical and audacious adventures often play an important role. The “Super” men and women, become guardians, while dreams of magic lamps and genies make just about anything possible!

How simply one is able to live in two worlds at the same time! In one he faces confusion and obstacles, and catastrophic falls; these he dusts off to face the next day, again with the same curiosity. In the other world of Heroes, he is protected, and sometimes even takes on the invincibility, nobility, and generosity of his favourite champion, living his most noble aspirations. With one leg in each world, he is both vulnerable and unstoppable, at the same time! And this is no contradiction, it is real. So what if he gets into trouble…who doesn’t? The hope of a victorious tomorrow and a zest for life quickly return, because even the greatest Heroes fall; and they stand back up stronger than ever.

As the years pass, however, and the child becomes a young adult, a dissonance sometimes develops; we may call it a “reality check”, or the need to prove oneself in the ‘real’ world. The vibrant world of imagination and adventure now seems unrealistic and childish, and the young adult suddenly doubts his own invincibility. These doubts break down the defences of his noble aspirations that had pulled him through many storms in his youth. Is it really so impractical to wield the heroic sword of compassion and humanness in the ‘real’ world? Or did our protagonist just lose sight of the spirit of adventure? This is a worthy question, as it may open our eyes once again, to a world forgotten.

Instead of his own conscience, he starts to depend on external re-assurance, recognition, and praise. The notion of success becomes dependant on the approval of others; and he avoids taking decisions, lest he face the loneliness of failure. While it is true that the “real world” has its obligations, do these obligations justify hiding behind the endless demands of a profession? Isn’t there anything important beyond meeting society’s economic and social norms?

And here he encounters his fragility; fearful that a single naïve decision will “break” him, he becomes an unwilling student of the complicated ‘Ways of the World’ and is convinced that this is normal. It expresses in a seemingly countless number of ways.

Some among us attack anyone that challenges us; to show our power, rather than using the criticism to improve.

Many are happy as ‘Kings’ of their comfort zones, building tall walls to protect what is familiar, even if these walls shut us off from connecting compassionately with one another.

Often we may procrastinate at the crossroads of choices, comforted that others are stuck too. We fear the time wasted in confusion and wrong decisions, and promise ourselves to “work on it tomorrow” rather than daring to move forward.

We are anxious of the uncertainties of life and find ourselves unwittingly running a losing race against time.

Does this sound familiar? Today perhaps, such fragility is a common malaise. We fear the innumerable things we cannot control, and avoid taking responsibility over the things that we can. Hence, we are satisfied to go with the flow rather than take the initiative to build our own path. This is but a “house of cards” compared to the fortress of imagination and dreams we once had!

But do we dare to see that the “inner youth” is a choice? Can we put our survival at stake, so that we might “Live” the dream of a better tomorrow? We need to make the decision to exercise the “inner force”, the strength and vitality of the familiar Heroes of another world! A world in which we are the “best versions of ourselves” – superheroes who uphold goodness and truth. Here justice prevails, and beauty is not lost to efficiency. It is a world where we are not fragile, but strong and ennobled by Virtue. This world waits patiently, within us all.

We knew that inner world once, and can dare to claim it once again. Maybe this is the antidote to fragility. To break boundaries and conquer new avenues; to live our potential, our destiny. Can we venture to Live once again in both worlds, the inner and the outer? So that tomorrow, when we face new and different challenges, we will know that the hero within us is ready. Let us dare to become the example of one who faces challenges, and lives to tell the tale; the story of victory through justice, truth, beauty and goodness, the story of a true “Super Hero”.