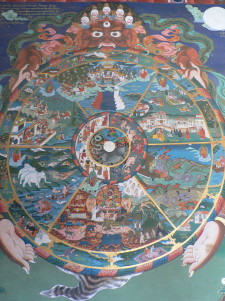 Why reincarnation makes a difference in the way we live our lives.

Every man’s soul has by the law of his birth been a spectator of eternal truth, or it would never have passed into this our mortal frame, yet still it is no easy matter for all to be reminded of their past by their present existence.

Polls taken in Western countries where there are few practitioners of religions that teach reincarnation nevertheless consistently show that many people “believe in reincarnation” (Harris Poll). Why? Plato says that our inner compass regarding certain fundamental truths or values (such as beauty, justice and goodness) comes from “anemnesis” or “recollection,” (sometimes called “reminiscence”): remembering unconsciously what has been seen in the time between incarnations, when the soul is in the celestial realm. Is it possible that we have more wisdom inside than we realize?

It has been said that when a person sees certain sights, such as the stars, the sea, or a fire at night, something in their soul remembers…

But in spite of the incessant roar and push of the media and society towards an ever more uncertain tomorrow, some people feel an inner need to look “deeper” and “higher.” They have an inner magnet that draws them towards Cause or Truth. They get a certain mysterious feeling when they look at a sunset, or a mountain, or a flower, or in the eyes of a child, or countless other elements of nature that they mysteriously feel related to. They ask questions such as:

Who am I?
What is my purpose in life?
Where do I come from?
Where am I headed?
These questions may sound like clichés, but they are perhaps the most important questions that we can ask. And, as we reflect on the nature of the human being, we will find more questions, observations that lead to a deeper understanding of ourselves and others. Questions such as:

Why do we humans strive to improve ourselves?
Why do we seek knowledge?
Why do we find beauty in harmony?
Why do we pursue justice?
Why do we intuitively believe in God (regardless of religion or denomination)?
Where do feelings of altruism and compassion come from?
Why do we love to work together? Humanity is one big family, even though at times we act immature and attempt to separate ourselves from one another (and often in the name of “religion” a word which etymologically means “to unite”!).
These questions are uncommon today. Unfortunately people are more likely to have memorized the phrases and “ideas” they see on television commercials than to have thought about these questions (What does that say about our society? Another good question!). Nevertheless these questions and others like them are very useful to someone who feels the need to understand her or himself, others, and the world we live in.

The answers lead inevitably toward the conclusion that the human being has a purpose. It is on a journey. It is evolving… There is a mysterious potential inside that calls us. Even though we may first recognize it outside of ourselves, in those elements of nature mentioned above, this intuition or sense of beauty or love of justice is the Immortal Soul. “Where” is the Immortal Soul? All the ancient systems of thought spoke of a “higher,” invisible world which is more perfect than the one we see, feel, smell, taste and hear.

The World of Archetypes and its Reflection

Plato taught that the manifested world we see around us is simply a shadow of a perfect world of ideas or “archetypes.” In the East, ancient philosophers also taught that the incarnated world is merely the reflection (“Maya” or illusion) of a far more subtle and real world.

Ideas are more real and much longer lasting than their worldly manifestation. For example, we may be more or less compassionate or patient (or at least know what those 2 virtues are), but the ideas or ideals of compassion and patience existed long ago, and will continue to exist after the current incarnations of the writer and reader of this article is over. Plato and all the other great masters of wisdom taught that every human being has an “ideal aspect” an immortal soul or spirit. This immortal soul, or “spark of divinity,” as it is sometimes called, existed before this life we are currently living and will last long after the body and the psyche are gone.

All of the ancient philosophies and religions taught reincarnation. Each one uses different words, symbols, parables and/or myths to explain the process. But all teach that souls determine their future incarnations and the way they spend the time between incarnations by the way they live the present one. If a person tends to be selfish, to only expend energy for their own comfort and pleasure, something which is contrary to spiritual development, then they will accordingly have few spiritual aspirations to fulfill in the afterlife. And when it is time to be reborn, the path of least resistance (this is within the law of cause and effect) will be to continue with a life similar to the last one.

But if during her or his life a person struggles to rise above that path of least resistance to live a little closer to truth, justice, goodness and beauty, and to put those ideals into action, then their will becomes stronger, their understanding clearer; and the path of growth or evolution will be more natural for them after death and in the next life.

The first lifestyle mentioned above, selfishly seeking comfort at whatever the price, will eventually lead to pain and unhappiness. The Buddha taught that “Pain is a vehicle of consciousness” and that pain is generated by trying to find something permanent in something that is by nature fleeting. This pain, he explained, eventually teaches us the difference between the real and the illusory.

Similarly, in the Phaedo, Socrates notes that the absence of pleasure often causes pain, and when pain goes away, pleasure ensues. In The Bhagavad Gita, Krishna calls pleasure and pain unreal, and says,

From the world of the senses, Arjuna, comes heat and comes cold, and pleasure and pain. They come and they go: they are transient. Arise above them, strong soul. The man whom these cannot move, whose soul is one, beyond pleasure and pain, is worthy of life in Eternity. (49)

One of the primary teachings of the Great Masters of Wisdom who have taught humanity is the distinction between the illusory and the real, both in the world and in the human being. The illusory part is what dies: in other words, returns to its origins. Like the old saying goes, “ashes to ashes, dust to dust.” The real part the divine part is what lasts, and together with the lessons learned from previous incarnations, reincarnates.

Reading the Book of Nature

Is it possible to perceive the law of reincarnation without teachings or explanations or symbols or parables – in other words, directly? As with other laws of the universe, investigation is needed to uncover truth; and then we need to contemplate in order to compare, analyze, synthesize and evaluate in order to ultimately UNDERSTAND. But are there clues that can be perceived directly? Is it possible to perceive truth directly?

The Voice of the Silence, and many other ancient works like it, refers to shunning “head-learning” and instead seeking “soul-wisdom.” Head-learning is collecting knowledge. Soul-wisdom is putting the teachings into action. The Voice of the Silence, again, like other treatises on spiritual development, also says that the keys to understanding are always inside the aspirant (as opposed to being something sought in the external world).

So when we have opened our heart, our eyes will see and our ears will hear. We will recognize illusion for what it is. We will be a bit closer to Truth.

For Seekers of Wisdom

Does believing in reincarnation necessarily change the way we live? Reincarnation is a mechanism of evolution. We are spiritual beings on a journey towards a fuller and fuller realization of our true nature. Each life we live provides us with experiences we need to learn and grow. Those experiences can be difficult, that is how we learn.

There is, however, a way by which we can learn faster and cause less pain for ourselves and others. That is the idea behind all the teachings of the Masters. It is the Path of Wisdom. This Royal Path requires sincerity, humility, will and persistence. It is a path which leads inward and upward. Traveling it, we learn about ourselves and others. We learn about Nature and God.

It is a path of liberation and hope. It is liberating because on it we build our own future with our own thoughts, words and actions. Only we determine those. No other person or being can control us or our future. This knowledge dissipates feelings of helplessness. That is why the path is ever-blooming with hope.

So, yes, the knowledge of reincarnation changes the way we live our lives. We begin to value the real things more. Plato spoke of Beauty, Justice and Goodness. As Confucius said, when we find a truth, no matter how small, we are obliged to live it. We begin to recognize that we are linked together with all beings.

We begin, little by little, to identify more with the Immortal Soul or Spirit, rather than with the temporal body and the lower emotions. We naturally become more moral, not because some one told us to, or out of fear of human made laws, but because we desire to be better, to have more harmony inside us, to be closer in our actions to the universal laws.

There is more peace in our hearts, even in the most difficult of times. And, in our own small way, we become creators of a new and better world.