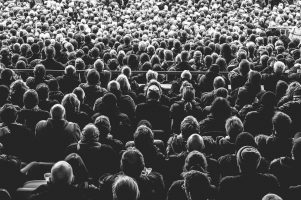 In the last century, the role of the masses grew immensely in importance and affected both culture and politics. Philosophy has been using the term masses and mass societies since the 19th century, but we can find statements about masses of people earlier, even in the works of the classical Greek thinkers like Plato. He argued against the rule of the people as, in his view, it leads to chaos and anarchy. The members of the masses are all equal and they demand equality, which he believes is not possible to reach in reality, as there are differences between us. For Plato, the best approach is to pursue justice so that everyone gets what they need and deserve.

Agreeing with Plato, the Spanish philosopher José Ortega y Gasset (1883-1955) argued against the rule of the masses too. He believed that society is a dynamic unity of a minority of people – who have inner standards and specific qualities – and the masses – which are made up of ordinary people, who just go with the flow and have no specific aims or values. Though the masses are usually thought of as consisting of people from the ‘lower’ classes, especially the working class, Ortega y Gasset says that they come from every class of society, regardless of socio-economic or other type of background.

Technical development boosts the power of the masses, but they are not aware of how much power they have. “Today, by the very fact that everything seems possible to us, we have a feeling that the worst of all is possible: retrogression, barbarism, decadence” – he wrote ten years before the Second World War. The rise of the many in politics he calls the revolt of the masses. Ortega y Gasset states that mass societies do not really care about where prosperity comes from; they are just looking for comfort. But prosperity comes from constant effort, planning and imagination. Hence the masses need aims and management, otherwise they easily become disorganized and can fall back into anarchy.

Against this very elitist perspective, left-wingers, such as Marxists, have regarded the masses as the main source of transformation in societies. They believed that the time had arrived for the oppressed class to seize power, take control of the means of production and redistribute the wealth that had previously been appropriated by the oppressive classes. This alternative believes in the self-awareness of the working class, which they called the proletariat.

According to Elias Canetti, although the masses may seem spontaneous, there is always a core around which they gather. People feel safe and unlimited within the crowd, even though they lose their own personality and act as part of the unity. In a mass, responsibility is divided among the many, so there is no one who can be blamed. Even the leaders of the masses are just members of the unknown, faceless crowd, which means they can be quickly replaced. The individual does not count in the mass, only the number of people; hence quantity is worth more in mass societies than quality. Ultimately, masses are passive and they need an active force to grow and move. This role is taken by the elites that diverge from the crowd and form a separate sphere within society.

Hannah Arendt, who wrote on the masses in relation to totalitarianism, says that because the masses do not hold any specific values, it is easier to motivate them against something than for something. In a disillusioned and often changing world, propaganda was able to address clear and coherent messages to the masses, with the result that they backed the ideologies and became the supporters of populist movements. Arendt claims that the masses tend to believe in an imaginative world based on conspiracy theories, rather than the evidence of their own eyes and the reality around them. As a result, masses can be easily misled and they quickly become the base of totalitarianism.

Nowadays, when populist movements are rising again and people are being manipulated by all sides, including TV, radio, the internet or billboards, it is important to distinguish within ourselves when our thoughts or behaviour are mass-like and against all our values and ethics. One of the most important messages of the past century is that it is easy to leave one’s conscience behind and become part of an unconscious mass.