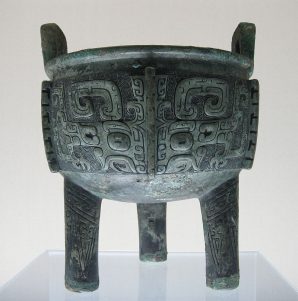 Chinese alchemy has two main branches: ‘external alchemy’ (Waidan) and ‘internal alchemy’ (Naidan). Both words are related to the word dan (elixir), which evolves from a root-meaning of ‘essence’ (the true nature and quality of an entity). In this brief introduction, I am going to concentrate on the tradition of external alchemy or Waidan.

The mythical origins of Waidan are related to beliefs about the existence of natural elixirs and medicines of immortality found in remote places inhabited by divine beings. Waidan’s origins are also linked to the enigmatic figures of the fangshi (‘masters of the esoteric methods’) who specialised in astrology, divination, alchemy, etc. The fangshi advised and taught members of the Chinese royal family.

The imperial patronage of alchemy is very old and in fact, during most of Chinese history, the emperors hosted exponents of religious or esoteric doctrines, including alchemy, at their courts. The Yellow Emperor, considered the first in the succession of human rulers, became immortal and ascended to heaven thanks to the preparation and the ingestion of an elixir. The alchemical preparations were also among the gifts that ‘heaven’ sent to virtuous rulers, and were therefore regarded as ‘objects’ that legitimised and protected the temporal power. Interestingly enough, we find similar parallels in western esotericism, where alchemy took the name of ‘royal art’.

External alchemy shares various features with Chinese medicine and pharmacology and is also characterised by religious and speculative elements. On the one hand, it presents itself as a way of communicating with the deities, while on the other its purpose is to acquire knowledge of metaphysical and cosmological principles.

Waidan is aimed at the preparation of elixirs through the manipulation of natural substances (lead, mercury, etc.), which are heated and combined together in a crucible. Great importance is given to their ingestion as well as to their symbolic meanings. The preparation and ingestion of the elixirs is not only for the attainment of longevity or immortality, but also for communication with beneficent deities and for the removal of, or protection from, evil spirits.

The preparation of an elixir is part of a process consisting of various phases, each of which is marked by the performance of rites and ceremonies. The alchemical practice consists of this entire process, not only of the work at the furnace.

Much of the Chinese alchemical tradition is based on the same cosmological conceptions that are found in Daoism (in the Daode jing and in The Book of Zhuangzi) and in the Book of Changes (the Yijing). The Dao first establishes itself as Unity, which then divides itself into the active and the passive principles (Yang and Yin). The re-conjunction of these principles gives birth to all the entities and phenomena in the world.

In this cosmological conception, each Yang entity harbours True Yin, and vice versa. The world is Yin in relation to the Dao (which is Yang), but conceals its One Breath (i.e. the essence of the Dao), which is True Yang. The alchemical process consists in gradually tracing the stages of the generative process of the cosmos in a reverse sequence, in order to recover the One Breath. This process is performed in an alchemical laboratory. In practical-alchemical terms, the initial ingredients (native cinnabar = Yang and native lead = Yin) are separately refined, so that cinnabar produces True Mercury, which is True Yin, and lead produces True Lead, which is True Yang. When the two refined substances are conjoined, one obtains an elixir which, when ingested, ‘gives’ immortality.

The alchemical crucible is the place which allows the ingredients of the elixir to ‘revert’ back to their original state (True Yin or True Yang). Here, the main work includes the preparation of a ‘substance’ with which to seal the crucible, called ‘mud of the six and one’. The term ‘six and one’ refers to the seven ingredients of the mud. The number seven has a symbolic meaning which is related to the cosmogonic process that occurs in seven stages.

The refined matter or ‘essence’ (the elixir) produced inside the crucible is equated to the seed that generates the cosmos and enables the self-manifestation of the Dao. This prima materia can be transmuted into alchemical gold. Gold, being a metal which doesn’t age (doesn’t tarnish), stands for the very symbol of immortality.

In summary, the Dao is the origin of all things and its primordial energy (the One Breath) is the source of life. As nature renews itself by following the principles of the Dao, mortals, too, can renew themselves and attain immortality by following and living these principles. And for the practitioner of Waidan, his alchemical work starts by retracing these principles in the heart of material substances. By finding that ‘essence’ which animates matter, he also discovers his own ‘essence’ or Being.