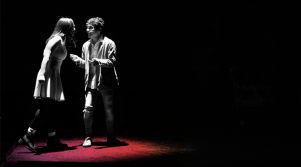 Today, we often think of theatre as merely a form of “entertainment” or “fiction”, yet in many ancient traditions such as Greek, Indian, and Egyptian, theatre played a very important role in society. It was considered to be educational, even mystical, with the aim of allowing people to connect to some invisible, intangible principles of life –perhaps a glimpse into the mysteries of life. Theatre was embedded with life lessons, left up to the audience to unveil and extract – to learn from and apply practically to one’s life. It was meant to be a tool to a higher purpose: to bring meaning and transformation into our lives.

Shakespeare’s theatre continued to play this role in the Elizabethan era, and today, 400 years after his death, his plays form part of the Literature curriculum in many famous Academic institutions across the globe. Some of his famous works, translated in various languages, continue to be adapted, enacted and televised, perhaps indicating that they hold timeless values, principles and important lessons which are still relevant for society today.

Theatre was typically classified into 3 categories, namely Comedy, Drama & Tragedy. The word tragedy was derived from the Greek word tragoidia[i]. Tragedy specifically played a very significant role in Greek theatre and continued to do so with Shakespeare. Othello, Macbeth, Julius Caesar to mention a few, are some of his famous tragedies.  The aim of tragedy theatre was to so involve the audience in the story, that by personally touching each one, and allowing them not to feel alone, they would come to the realization that their pain and suffering is not unique to them, but in fact universal. It was a tool to understand the cause of the anguish, in ourselves, and each other, and therefore to begin the healing process in the search for the solution.

The narrative of the Tragedy was used to examine how suffering and pain is usually a factor of behaviour, choices, states of mind, and external circumstances that impact both oneself and others. Shakespeare, through his work, touches upon all the various, intricate aspects of human nature that we struggle to understand and deal with – our uncontrolled emotions, our conflicting thoughts, our burgeoning egos and insecurities, and the need/dependency for approval of the society in which we live – some of the very reasons today for the disharmony, discord, struggle and strife that we see around us. Through his plays he, together with his audience, explored the depth and impact of some of the potent driving forces that shape human relationships: love, hate, jealousy, envy, greed, ambition, power and many more.

An analysis of Shakespeare’s tragedies typically reveals some standard elements, a few of which we will speak about in this article.

The Hero – The central character is usually a tragic hero, whose choices or weaknesses lead to his downfall. All heroes possess some admirable and valiant qualities, such as bravery, compassion and integrity. But, a lapse in judgement, a moral failing or an overpowering flaw, however momentary, results in an action that has disastrous consequences. A classic example of this is one of Shakespeare’s most famous plays, which has inspired many adaptations both in theatre and cinema, Othello.  Othello is a great and respected general in Venice, yet being from North Africa he is also an outsider. He has married Desdemona in secret and without her father Brabantio’s (the Venetian Senator’s) consent.  Eventually, Othello kills his beloved wife and himself due to his own insecurities (that were triggered by Iago, an officer who was jealous of Othello and was plotting his downfall throughout) that lead him to falsely believe in her infidelity. He realised his grave misjudgement only after he had killed her.

Othello’s deep–rooted insecurity as indicated in the lines below was ultimately the cause of the tragic end to what could have been a beautiful love story:

“Rude am I in my speech,

And little bless’d with the soft phrase of peace:

And little of this great world can I speak,

More than pertains to feats of broil and battle…

Haply, for I am black”

While others on the contrary thought very highly of Othello:

“The noblemen of Venice:

The Hero in Shakespeare’s plays is a good man, honest, and usually in a position to positively influence others – however, just like all of us, he is not perfect. He struggles with insecurities, flaws, difficult circumstances and so on. Perhaps it is the story of each one of us, and it is up to us to extract the practical and relevant lessons with a little personal reflection. Do we sometimes allow our doubts, insecurities, and other such emotions to get the better of us, to outshine the goodness, kindness and compassion that we all have, resulting in a negative impact not only in our own lives, but on those around us? Does this then have a cascading effect on our relationships, on those that we love, and on the life we choose for ourselves? Perhaps, through the examples of some of Shakespeare’s heroes, we can learn to become more aware when we make choices, of what and who we allow to influence us. Can we learn to allow our inner compass, our virtues, to guide our decisions rather than the strong pull of the various voices that we all have – the whirlwind of emotions, thoughts and opinions that often confuse us and divert us from what we know from within is true?

Tragic Flaw – A tragic flaw is a character trait that triggers the hero’s defeat. The flaw is usually a limitation they possess, a strong tendency of the character that influences his decisions, often to make the wrong one, which ultimately leads to his downfall. For instance, the title character in Macbeth has the tragic flaw of unbridled ambition, which drives him to join forces with his power-hungry wife and attempts to murder the king. While in many instances, Macbeth has doubts and reservations about the murder –his ambitious nature and influence of his even more ambitious wife ultimately outweighs his reservations – leading to his own death.

In Julius Caesar, it is said that his arrogance was the tragic flaw that ultimately led to him being assassinated. While Julius Caesar was considered to be a great King, his flaw was that he thought he was invincible.

His famous lines indicate that he never listened to advice even from his well-wishers and eventually he ignores every sign of conspiracy that was presented to him.

“I rather tell thee what is to be feared

Than what I fear, for always I am Caesar.

Come on my right hand, for this ear is deaf,

And tell me truly what thou think’st of him.”

It is perhaps referred to as “a tragic” flaw because, even though it is a trait that sometimes we are well aware of, we do not make the effort to work with it and overcome it. It is eventually the trait that holds us back, causing discord in our relationships and disharmony in our life. Perhaps, through the tragedies of Macbeth & Julius Caesar, we can begin to recognize that these flaws are within us too and perhaps holding us back from our true potential. Perhaps we can learn to identify and accept our flaws accurately, because only then can we make the effort required to work on overcoming them, only then is there the possibility that we can course–correct, thus preventing us from making choices that may lead to unfavourable situations in our lives.

Internal Conflict – Internal conflict is one of the most essential elements in a Shakespearean tragedy. It refers to the confusion in the mind of the hero. The tragic hero always faces a critical/ethical dilemma. It perhaps urges us to contemplate on this question – do we really have a choice? We see that in Othello, had his trust and love for Desdemona been at the heart of his decision he would have likely made a different choice, thus leading to much more favourable consequences. Instead, in the moment of decision, his deep-rooted insecurities took over. Perhaps a lesson for all of us – when we are faced with ethical dilemmas, can we choose what we know is right/ true from within? When flooded with the influence of emotions and confusion, can we pause and respond when we are calmer and stable again?

Similarly, could Julius Caesar have avoided his fate, had he chosen differently? If he chose to listen to the soothsayer’s warning “Beware the ides of March” as well as the warnings from his well-wishers and wife. Instead, he thought that if he did not go, it would reflect his fear and weakness.

We see this reference to internal conflict in various mythologies as well, be it in the Indian tradition – Arjun’s dilemma in the Mahabharata, the ancient Greek hero, Hercules or Gilgamesh – the ancient Mesopotamian Hero. Upon reflection, we can perhaps find that this inner conflict recurs constantly within us – the conflict between knowing what we need to do, and doing it. The conflict between doing what is true, good, right vs what is convenient, feels good and comfortable. The conflict of responding with kindness, compassion and empathy as against impatience, intolerance and anger. In general, in our daily choices, conflicts between our inner moral compass which is often subtle and not so easy to listen to, and the louder voices of our desires, attachments and habits that pull us in various directions, often clouding our judgement.

What can we do in the face of these debilitating conflicts? Perhaps by watching the lives of his tragic heroes derail so completely, Shakespeare is exhorting us to not give into either the arrogance (Julius Caesar), the despair and insecurity (Othello) or the helplessness that allows others to make decisions for you (Macbeth). Perhaps we must recognize that an internal conflict is a clarion call to action, the action of looking deeply within to understand clearly the motor that is driving each end of the conflict and then to be able to choose always the path that leads towards the just action, the right action, without looking for reward.

We can therefore see that theatre, much like other art forms such as dance, music etc. have many layers of learnings, and it is up to the audience to extract for themselves what they can, according to their level of consciousness, and their needs and circumstances. We can use theatre simply as a form of entertainment, or as something more, a tool for reflection and investigation, to bring about change within us, to extract some universal principles that could, in helping us make better choices, allow us to take a small step forward in our own evolution.

To investigate what we can relate to as we read or watch Shakespearean theatre – are we very different from the protagonists or can we find some similarities? Do we behave in the same way or are we able to see their mistakes and learn from them, so we make better choices in our own life?