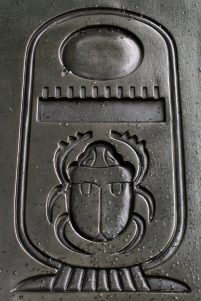 The scarab is the most venerated, the most common and the most familiar of the Egyptian symbols. Its symbolism is twofold: with its folded wings, it represents the disciple, life that has not yet come into existence, that starts its journey trying slowly to unfold its wings until it can flap them quickly. Then, this heavy mass, stuck to the ground, this animal that crawls leaving tracks as if the ground has been scratched, rises up and flies to the sun, transforming itself into Kepher, symbol of the initiate and the master in relation with Amon, the winged sun-disc.

The Greeks and the Romans will later adopt a sentence engraved, it seems, in the hard pillars that sustained these sacred scarabs in the Egyptian temples: “I am Kepher, the disciple, when my wings open, I will resuscitate”.

The Egyptian hieroglyphic “Kepher” means “to succeed to be “, that is to say, to make oneself, to give oneself a given form, to rebuild oneself. That is the reason why the scarab is a symbol of resurrection, image of the self-renewing Sun. That is why the scarab is represented carrying a ball between its legs like, on the one hand, the sun that renews itself each day and, on the other hand, the disciple that is reborn from his own decomposition. The scarab moves all his life stuck to the ground where it rolls in front of itself a heavy dung ball from which it will be reborn, because it had deposited its own seed in the ball. So, at the end of its life, it will unfold its wings and rise up to the sun, sure of its fate, for, at that precise moment, it will know that it was born to fly.

In China, we find the same symbolic interpretation: “The scarab rolls its ball and in that ball life is engendered ” says The Secret of the Golden Flower. Taoist commentators cite the activities of the dung-beetle as an example of the skill of what is to all appearances skill-less, and the perfection of what seems imperfect, of which Lao Tzu spoke and which are the criteria of Wisdom.

The Book of Chilam Balam of the Mayas depicts the scarab as the filth of the Earth, in both material and moral terms, destined to become divine.