The Science of Space – Vaastushastra 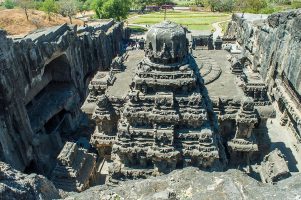 As a student of Sri V Ganapati Sthapati, and then from her association to the School of Architecture of Madras University, for over 30 years Sashikala Ananth has been investigating the classical Indian science of architecture, known as Vaastu, combining both textual knowledge and practical field application. She has distilled her experience in her books that include The Penguin Guide to Vaastu and Pocket Book of Vaastu. The following is a synthesis of a conversation about this ancient genre that New Acropolis Culture Circle hosted with Sashikala ji in May 2021.

When we were in our 20s, my husband, myself and about 15-18 of our contemporaries were deeply influenced by Shri. Dharampal one of the greatest sociologists of recent times. He inspired us to dedicate a decade of our lives to study the Indic traditions and bring it back to the mainstream. He told us, “Either you run behind the tail of the West, or you go back into your own past and become masters.” We chose the second. We had to take the trouble to learn traditional wisdom from an expert so that it would not get lost, or get commercially manipulated.

Historically, Vaastushastra goes back to the Mohenjo Daro and Harappa period, which is conservatively estimated around 3000-4000 BCE. As with all traditional wisdom, the practice came first, and the text itself followed much later. Reconnecting to Vaastushastra in its original form is very important because unlike other traditional subjects like Ayurveda and Yoga, Vaastu has been sidelined. After I went to study with Ganapati Sthapati in 1982, I found that no college of architecture in India teaches Vaastushastra, though it is the oldest living system of architecture in the world. So it was a huge responsibility to study it and make it available for the contemporary mind. I was the first woman to learn it, and in the last 15 years, I have been able to teach it to a lot of students of architecture.

The traditional practitioners of Vaastushastra are called Vishwakarma. The community is divided into five categories:

At one time, these five sub-groups looked after the design of the entire environment throughout the subcontinent. In the colonial period, however, with western education, they were deprived of their building license. Thus in the last 200-300 years, the traditional system has been side-lined, to be used only in the building of religious places.

Every traditional subject is connected to the other. The disciplines bring together inner and outer practices. Vaastu is the relationship between the object and space. Yoga is the subject which deals with the self, the inner space and the ability to respond to the outer space. Ayurveda deals with personal wellness and harmony, food and healing. Unless the three of them come together and converge, we cannot have balance or harmony, neither in the self, nor in the context we inhabit.

This interconnected nature of reality was included therefore in the Vishwakarma teaching methodology. What did the Parampara Shiksha teach the apprentices? They had to study all the allied subjects; to understand Vedanta, recite the Vedas, work with the dancer, the musician – to understand the Rasa of these subjects. Rasanubhava means to be able to experience with enormous amount of savouring, such that you stay with the feeling for a long period of time. And skill-building included drawing, sculpting, etc. They felt the material. They touched the stone, the brick, the mortar, the earth, the wood, the metal and so on. They had to study the Vaastu Shilpa Shastra. Usually, they worked in the yard during the day, and studied with the master in the evening.

Vaastushastra is also known as Vaastu Shilpa Shastra, where Vaastu refers to the built form and Shilpa refers to the individual embellishing elements, such as sculpture or other ornamental art work. There are two critical words contained in Vaastushastra: Vastu and Vaastu. Vastu can mean to reside or to locate an object. When that object is placed on my palm, the palm becomes the Vaastu, the two or three-dimensional space. Together they are combined to form the built environment, or the body of any object which encloses space. Hence, any object, placed in a space, becomes a Vastu and a Vaastu. Every object occupies a space and it has a relationship to that space. Every object is enclosed in an envelope, which in turn itself becomes an object enclosed in an envelope.

What is the nature of land that we relate to when we build something on it? Or when we grow something on it, when we stand on it, when we walk barefoot in the garden on the grass? What is it that is being picked up by our bodies? What is it that is picked up by the seed which becomes a tree; the essential unseen energy coursing through the earth, capable of creating, supporting, and nurturing life? When we build with a certain respect and responsibility towards the energies that are in the land, we can create something that is capable of offering wellness and prosperity to the user.

Another important aspect of Vaastushastras is Taala. It is the same word in music and dance, as well as in sculpture and architecture. Taala means rhythm, order. Anything that is rhythmic in nature is capable of being proportionately in a state of balance. In music you call it the relationship between sound and silence. In architecture it would comprise relationships between form and space, light and darkness. The ability to blend together various polarised experiences in an orderly manner is Taala. In architecture, it is very critical.

The rhythmic modular component used in architecture is called Padavinyaasa. For example, a temple is laid out in a modular manner. The basic unit is the Garbhagruha, the sanctum. Everything else is laid out in multiples of the size of the sanctum, including the open spaces. This is why when you walk through a temple town, there is a feeling of inner quiet and inner balance; what you see is very rhythmic and it affects the mind in an extremely beautiful manner.

The Kailasa Natha temple is an extraordinary achievement because it has been carved out top-down, from a rock mountain, and required unbelievable skill. People have always wondered where they took the stone that was removed from the outcrop. There seems to be no evidence of it having been taken anywhere. This quality of work can only be done by trained artisans who are able to hold the ratios and proportions in their mind, in an embodied manner, because they didn’t make life-sized models. Also, it means that the team worked extremely efficiently. The one who was cutting, the one who was carrying, the one who was shaping the tools, the one who was assisting or marking, had to have worked in a very synchronised manner. They would have had around a 1000 workmen on the site. Feeding them, housing them, managing the systems, must have been a remarkable feat.

Vaastushastra has had a strong influence on pooja, ritual worship. Any image fashioned for the sanctum, all the attending deities placed in the temple, their proportions, and the ratios created in the temple, the sacred walk…all of it is meant to create an inner experience for the observer. When one walks through the Gopuram (the entry-way), one sees the Dhwajasthambham, the flagpole, which represents the chakras in the body. The devotee goes to the Dhwajasthambham, touches the base, which represents the Mooladhaara, the root chakra, and says to the divine, “May you awaken my Mooladhaara so that I may touch my spiritual higher state.” And then one walks around the temple, feels things, smells, tastes the water that is given, listens to the chanting, and finally when one comes to the Garbhagruha, in the flickering light of the lamp, there is a possibility that one might have an inner experience, a Rasanubhava within oneself.

At that point, after having completed the Pradakshina (circumambulation) around the temple, one does an Atmapradakshina (circumambulation around one’s inner self), because within us is the Jeevatma, being awakened by divine resonance. So, you say thank you, and go around yourself. And then one returns to the Dhwajasthambham, to offer Namaskara (ritual bowing). This is part of the ritual and the temple is designed to accentuate it.

Similarly, you have the Yantra, or Mandala in Buddhism. A Yantra is a two-dimensional geometric engraving on a metal plate, which is also mathematically accurate and is capable of evoking certain energies within yourself and the space.

Furthermore, a typical South Indian village house always houses a Tulasi (holy basil plant) at its centre. Every morning at day break, after drawing the Kolam (decorative designs drawn using rice flour paste) on the outside, the lady of the house, waters the Tulasi, removes a few of its leaves, and puts it into the drinking water of the family, or into the food – both are acceptable. And then she lights the lamp to start her daily routine. This attitude of relating to the land, the plants that are good for the soil, all of this is part of Vaastushastra.

The moment you go away from the Earth, the natural connection is lost. It leads to certain forms of anxiety, sleeplessness, stress, digestive problems, and so on. You can’t change the reality of high-rises in cities. But through a process called Chikitsa Vaastu, you can recreate an experience of the Earth.

The Inner and Outer Elements

Every aspect of the traditional wisdom has two sides: there is the rational side, and there is the mystical or spiritual side. Mystical means the capacity to look at things in an abstract manner. The former correlates with the linear, logical, cerebral aspect, while the later correlates with a cyclical system, like the way Kaala, or time, is looked at in Sanatana Dharma. On the one hand, we have the need for tangible evidence: anything that is not physically visible, we cannot see. We also have the emotional impulsive aspect which says, I feel, therefore I know it exists. Then there is the side of us which says, the ordinary is real, the extraordinary is a lie. But there is also the fact of our own experience, or Anubhava, which says the extraordinary is part of our life. Even while you have the ordinary going on, the extraordinary is capable of bursting forth.

On the one hand the parameters must be clear. But parameters can also be deceptive, as we all know. Ambiguity is therefore a part of all experience. So, these two aspects, like two plates on a balancing system, exist simultaneously. There is a combination or a blending of the two.