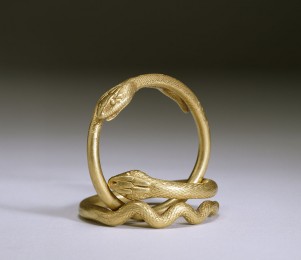 Once upon a time there was a doctor who was an expert at treating snakebites. One day he was called for by the relatives of a man who had been bitten by a deadly poisonous snake.

The doctor told them, “There are two ways of treating this snake bite. One is by giving medicine. The other is by capturing the snake who bit him, and forcing him to suck out his own poison.” The family said, “We would like to find the snake and make him suck the poison out.”

After the snake was caught, the doctor asked him, “Did you bite this man?” “Yes I did,” said the snake. “Well then,” said the doctor, “You must suck your own poison out of the wound.” But the strong-willed snake replied, “Take back my own poison? Never! I have never done such a thing and I never will!”

Then the doctor started a wood fire and said to the snake, “If you don’t suck that poison out, I’ll throw you in this fire and burn you up!”

But the snake had made up his mind. He said, “I’d rather die!” And he began moving towards the fire.

In all his years, the snake bite expert doctor had never seen anything like this! He took pity on the courageous snake, and kept him from entering the flames. He used his medicines and magic spells to remove the poison from the suffering man.

The doctor admired the snake’s single-minded determination. He knew that if he used his determination in a wholesome way he could improve himself. So he taught him the Five Training Steps to avoid unwholesome actions. Then he set him free and said, “Go in peace and harm no one.”