The Symbolism of the Emerald 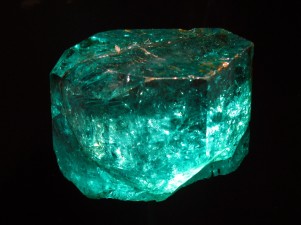 The emerald is the stone of green light, which endows it simultaneously with an esoteric significance and with regenerative powers.  In Central America, the stone was associated with rain and blood and all the symbols of the lunar cycle. It was regarded as a token of fertility. The Aztecs associated the emerald with the bird quetzal, symbol of the renewal of spring, and the stone was thereby linked with the East and with everything connected with the worship of Quetzalcoatl.  The beneficial influence of the emerald was also recognised in Europe where the stone was attributed the quality of facilitating childbirth.  Alchemists regarded the emerald as the stone of Hermes, having the property of penetrating darkness. The stone gave its name to the Emerald Table, attributed to Apollonius of Tyana, which contained the secret of Creation of Beings and the Science of Causes of all things. Hermetic tradition also maintained that an emerald fell from Lucifer’s forehead during his fall.  According to medieval folklore, the emerald, placed upon the tongue, enabled to summon evil spirits and converse with them. However it was also recognised as being able to heal some diseases, especially those pertaining to eyesight.  Being a mysterious stone, and therefore dangerous to those ignorant of its powers, the emerald was almost universally considered as the most powerful talisman. Hell-born, it could turn itself against the inhabitants of the infernal regions, whose secrets it knew.  In the Apocalypse of St John, God appears surrounded by a rainbow “in sight like unto an emerald”.  The Grail is carved from an enormous emerald.  As the stone of occult knowledge, the emerald partakes, as do all symbolic objects, of lucky and unlucky aspects, benign and malign.  Christian tradition drew a distinction between properties connected with the Heavens and with the Underworld, Good and Evil, and the blue of the sapphire opposed the green of the emerald.   Nevertheless, the emerald is also the Papal jewel. In the Christian middle ages, certain Egyptian and Etruscan beliefs survived (such as the stone placed on the tongue enabling one to converse with evil spirits). Thus the emerald was the jewel of clairvoyance.  In ancient Rome, it was attributed to Venus. In India, it was believed to impart immortality.  The emerald is the expression of seasonal renewal and therefore it expresses the positive force of the Earth, of manifested life and of evolution.