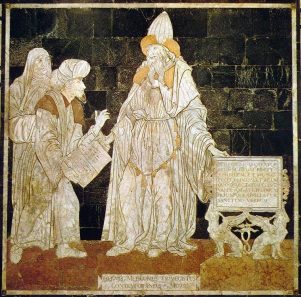 We live in the so called Information Age in which any kind of knowledge is at our fingertips. Topics which fall under the categories of ‘esoteric’, ‘metaphysical’ or ‘occult’ have never been easier to reach. Hundreds of research papers on these topics can be freely downloaded on various online platforms (e.g. www.academia.edu), while thousands of antique books with occult themes have been digitised and made available online. The publishing of “mind, body, spirit” books have been booming for years and show no signs of slowing down. While a staggering number of YouTube videos featuring so-called ‘esoteric’ topics are only a mouse-click away.

We can see that there is no lack of interest in these topics, but despite this interest, the field of ‘esoteric’ studies is still at an embryonic stage and I believe that it will still take many years before it becomes part of our formal education. This is an emerging field which only recently has gained entry to academia. Let’s now explore together some of its features and implications.

In the field of history of religions and spirituality, esotericism is a kind of artificial category which scholars have applied to a range of currents, movements and ideas that were known by other names and developed within Western society at least before the end of the 18th century. Among these spiritual currents and traditions we find, Hermeticism, Gnosticism and Neoplatonism, to mention just a few.

Actually, there has never been a field of study or doctrine per se that can be labelled ‘esotericism’. There is instead the study and practice of the ‘inner’ (and ‘deeper’) aspect of a religious/spiritual ‘tradition’.  Its aim is (or perhaps was) to redirect all the components of man’s psyche (emotional, mental, volitional, etc.) towards an inner regeneration and re-harmonisation. In antiquity, this ‘esoteric training’ or education served as the foundation to reach higher stages of spiritual realisation. These stages constituted the so-called ‘path of initiation’. But initiation is not the same as esotericism. One can be an esoteric seeker or a student of esotericism but not an initiate!

The reason why the study of esotericism (and its applications) has never reached great popularity is due to many factors. In a general sense, we can say that a clear rejection of many of these teachings took place before the advent of the Age of Enlightenment, when in Europe there emerged a hostile (Counter-Reformation) critique towards various forms of Western thought that had developed with the Renaissance. Later on, when the Age of Enlightenment was already in full swing, these teachings came to be regularly categorised under the labels of “superstition“, “magic” and “the occult”. The term magic for instance, became ‘stigmatised’ and relegated to everything that was not modern (i.e. scientific and rational). Modern academia, which was then in the process of developing, continued to reject and ignore topics that came under “the occult”. This kind of prejudice towards esotericism within academia has persisted until now.

In the 17th and 18th centuries, this situation was partly balanced by the appearance and development of initiatory societies professing esoteric knowledge (such as Rosicrucianism and Freemasonry). Later on, Romanticism (which included philosophical movements like German Idealism) and historical figures like Max Weber contributed to the re-emergence of Western esotericism and the re-enchantment of the natural world. The 19th century saw the rise of new trends of esoteric thought now known as occultism. Prominent groups in this century included the Theosophical Society and the Hermetic Order of the Golden Dawn.

The academic study of Western esotericism was pioneered in the early 20th century by various individuals who came especially from the field of history of religion. In the works of people like Henri Corbin, Gershom Scholem, Mircea Eliade and even Carl Gustav Jung (not a historian but a psychoanalyst), we see a reevaluation of the study of esotericism. Around this time, for instance, we find the Warburg Institute, an important centre of esoteric studies with such great scholars of Hermeticism like Frances Yeates. In 1965, thanks to professor Henry Corbin, the university of La Sorbonne in Paris established the world’s first academic post in the study of esotericism. And in 1979, also at the Sorbonne, the French scholar Antoine Faivre developed the study of Western esotericism into a formalised field.

Because scholars have brought their own philosophical approaches into this field we find various definitions of the study of esotericism. Those belonging to the ‘Perennial’ school of thought, for instance, have also seen esotericism as a ‘Perennial’ hidden tradition. This approach views Western esotericism as just one form of a worldwide esotericism at the heart of all world religions and cultures, reflecting a hidden esoteric ‘Reality’ or ‘Universal Tradition’. This approach has been dominated by a predominantly religionist paradigm (1).

Another perspective has seen the study of Western esotericism as a way for ‘re-enchanting’ the world by seeking to rebalance the positivistic, atheistic and over-scientific world views which have come to dominate the Western world. The scholars who have embraced this perspective have abandoned the religionist paradigmand have emphasised more empirical, historical and discursive approaches.

Finally we find those scholars who view esotericism as a category encompassing all of Western culture’s ‘rejected knowledge’. A kind of dustbin containing those theories, teachings and world views rejected by the mainstream intellectual community (2) . This perspective has brought a greater interdisciplinary debate across the boundaries of the humanities.

To conclude, it is important to emphasise the potential that lies behind the study of esotericism. Many of those individuals who have engaged themselves fully into this field (and its applications) have become transformed in heart and mind. Their historical and religious horizons have broadened while the central themes of ‘Western culture’ have acquired new and deeper meaning.

1. Within the academic field of religious studies those who study different religions in search of an inner universal dimension to them all are termed religionists.

2. As quoted by Wouter J.Hanegraaff in Western Esotericism: A Guide for the Perplexed.