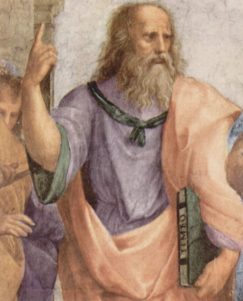 Plato is typically thought of as a ‘respectable’ Greek philosopher who is widely taught at reputable universities around the world and admired for his original philosophical thinking. However, there is another side to Plato which is only explored by a minority of scholars, starting with Heinrich Gomperz in the 1930s and continuing with the ‘Tübingen School’ of today. In many of Plato’s works, the philosopher makes reference to oral traditions going back to Pythagoras and the Orphic Mysteries, and for some researchers, such as Savvas Pattakos (Plato’s Secret Doctrine, 1998), these teachings form the main element in Plato’s life and work. In this article I would like to highlight some of these esoteric elements, particularly as they are found in the myths and allegories that punctuate his dialogues.

The Myth of Er: Life after Death and Reincarnation

This myth appears in Book 10 of The Republic. In it he describes the near-death experience of a Greek warrior who was wounded in a battle and travelled with the souls of his dead companions to the otherworld. He describes temporary heavens and hells where the souls of the just and unjust go; after a time, the souls are brought together again and led to a ‘hall of destinies’ where they can choose from a number of possible lives on the basis of their innate wisdom or ignorance. Then, after crossing a desert and drinking from the river of forgetfulness, they are reborn into their chosen life on Earth. Because they have drunk from that river, few souls remember that they have lived before or understand the meaning and purpose of their lives. The same theme of reincarnation appears in his dialogue The Phaedo.

The Myth of the Giants and the Origin of Love

Another interesting strand of myth in Plato is that which speaks of the esoteric history of humanity. As we can read in H.P. Blavatsky’s Secret Doctrine, according to Eastern esotericism humanity has evolved through many forms over a long period of time. At one time (as we find confirmed in countless myths from around the world), we were ‘giants’ and these giants were ‘hermaphrodite’ or ‘androgynous’ and did not reproduce in the same way as we do. At some point in the long distant past, according to these esoteric traditions, humanity divided into two sexes, the present mode of sexual reproduction began and the giants diminished gradually in size.

In Plato’s myth, told in his dialogue The Symposium, he says that in the past humans were not as they are now; they were much larger, spherical in shape and hermaphrodite, having the two sexes within them. Becoming proud of their strength, they decided to storm heaven and rule in place of the Gods. To reduce their strength, Zeus cut them in half, with the result that they became smaller and now only had one sex within them, becoming either male or female. As a result, human beings are now constantly looking for their ‘other half’.

The Myth of Atlantis and the Great Flood

In another work, The Timaeus, and its sequel, The Critias, Plato touches upon another esoteric account of human evolution – the myth of Atlantis, a continent that was destroyed in the Great Flood (which also appears throughout world mythology). He describes a technologically advanced civilization that existed long before historical Egypt and Greece had come into being and says that there have been many destructions and reconstructions in the long history of humanity.

The Creation of the Universe

In the The Timaeus, Plato also gives a highly esoteric account of the creation of the world, which is based on mathematics, as in the Pythagorean system. Amongst the many interesting features of this dialogue is the idea that Time was designed by the Creator as ‘a moving image of Eternity.’

There are many other myths and esoteric teachings to be found in Plato’s works, such as the Chariot of the Soul in The Phaedrus, which explains how we humans fell into matter and how we have all knowledge within us (Plato’s theory of ‘reminiscence’); or the famous Allegory of the Cave, which appears in Book 7 of The Republic and describes the journey of the philosopher as he emerges from the darkness of ignorance into the light of wisdom, reminiscent of that well-known Eastern maxim: “Lead me from darkness to light”, which could be said to sum up the whole of esoteric philosophy.

Let us hope that, as research into this aspect of Plato’s writings continues, more and more light may be shed on the subject, so that this important part of Plato’s teaching will enter mainstream university education and benefit a new generation of philosophy students.